A good way to end the week!

In honor of "GM's Day" - which I appreciate but don't recall seeing before maybe last year - the guys at Adamant Entertainment are having a 50% off sale. That means you could pick up the ICONS rulebook for $7.48! That's a helluva deal right there!

Disclaimer: I have no connection to Adamant or anyone that works there. I just like ICONS. It works especially well when playing with kids and we have played it that way a lot.

Go here now! Get it! Play it! Start a blog to recap it! Join the email list!
Posted by Blacksteel at 3:13 PM No comments: 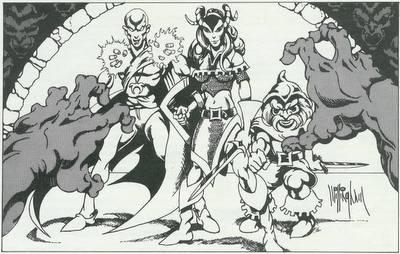 So Apprentice Blaster has a fairly big birthday tomorrow. He was with us tonight and we were out in the garage looking at my wall of game shelves and talking about birthday plans and generally shooting the breeze. He mentioned that he likes playing 4th Edition, but he really likes running Basic - it's simpler and faster - and we talked a little about his ongoing efforts to talk his friends into playing and how that's been tricky with schedules and all. Kid afternoons just don't seem to be as free now as the ones I remember. I told him I could give him the gear but he was going to have to get the players on his own. He hasn't given up yet, He also told me the pre-gens in the back of that Haunted Keep adventure are way too powerful as some of them have an 18 in something and no negative stats at all, so take that Dragonsfoot! Powergamers! So sayeth my new teenager!

The new Marvel game came up and we may give it a whirl this weekend, probably after his friends are gone. I've noticed that when we play something Marvel-flavored he prefers either Captain America or Wolverine. I'm sure that symbolizes something about the teenage mind and being torn between doing the right thing and doing what you want. Considering they both like to kick the stuffing out of people up close I think it mainly means he likes characters that kick ace up close and personal. He's getting a copy of DC Adventures for his birthday so maybe Batman will be added to that list as well.

We also discussed what different editions of D&D are good at and what's this Traveller game that takes up a whole shelf by itself and are we going to try Shadowrun anytime soon and how I blew him up too fast the last time we tried Battletech and we need to try that one again  - just general game talk for a while.

Then a gerbil ran over my foot and we spent about 20 minutes recapturing it, but that's a story for another time.

Anyway it's good to know that the kids are interested in this thing, but not obsessed with it. He and the other apprentices have a pretty good attitude about it.

We have birthdays less than a month apart, putting almost exactly 30 years between us and I notice little generational differences sometimes. Some things to keep in mind about the teens and tweens coming up now:

Anyway, it's a good time here*. More to come.

*Other than Apprentice Red getting his learner's permit today. Oh lordy lordy lordy ...
Posted by Blacksteel at 11:02 PM 4 comments:

As we pick up the action our heroes discover a bundle in one corner of the dead ogre's room begins to move. After a cautious investigation they discover it's an elf - an adventuring elf named Draco who was captured by the ogre the day before and fortunately not eaten yet. He begins looking for his gear as the party unlocks a door in the south wall and discovers more prisoners - a couple of humans and a gnome. The two humans are merchants from Hillsfar and promise to send a reward if they are freed. The gnome is a bit more mysterious about his background but mentions that he too was captured by the ogre a few days ago and gives Horus a pin, telling him that it will mark him as a friend to other members of his brotherhood. 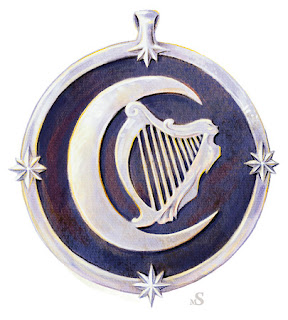 After leading the freed prisoners up to the surface, the wizard offers to escort them back to Hommlet. Draco, however, wants to stay and explore the ruin with his rescuers as he is a ranger and wants to make sure the danger is ended.

Moving back to the under-moathouse the party heads for the southern end of a long hall they did not explore previously, discovering a row of doors in one wall. Opening one, it appears to be a cell, and it contains two zombies who shuffle forward, moaning, as soon as the door is opened! This appears to be a signal as the other 4 doors are shoved open and more zombies emerge. From the darkness behind the party more shuffling sounds are heard as even more zombies stagger forth! It's not looking good and the party undergoes a serious morale check around the table at this point.


Draco, somewhat farther back than the rest of the group unleashes death in the form of twin arrows to the face of the nearest zombie as Horus and Po cut down another! Encouraged by the double kill, and realizing that they might be able to fight their way through this, the party now makes a stand, slashing and smashing their way into the horde. Torinn finds himself cut off from his companions and unloads his acid breath and his burning spray spell all at once, sending blazing, smoldering zombies staggering back. The bladesinger, druid, and swordmage (and Po) form a line, supported at range by a quick-firing ranger and link back up with the sorcerer, finishing off the shambling horrors soon enough.

A brief rest is called after the fight and then of course the searching begins. Checking the area, the cells, and the remains they find a few trinkets but nothing major. The room adjoining the hall is a torture chamber, one used more recently than it should have been for an old abandoned ruin. They also find a secret door in one of the columns in the area - the column turned out to be hollow and had runs set in the interior wall, leading downward into darkness. After a brief debate the heroes climb down, one by one, into a dank, earthen tunnel, complete with bad smell.

Moving single-file down the tunnel they soon come to a larger, open area and at the far end they see a group of humanoid creatures clustered around something on the ground - the ranger thinks it's a body, and the bladesinger agrees. They decide to be the attackers this time and charge forward, gaining the advantage of surprise. Concentrating on the nearest thing, which they identify as a ghoul as soon as it turns toward them, they score hits from blasts and blades but these ghouls are made of tougher stuff than the zombies and it does not fall. In fact, one of them leaps at Po and slays the spirit-bear in a rending slash of claws and teeth! Enraged, Horace lays about with cudgel and spell, as do the others, and soon the remaining ghouls are slain, the last falling to a flourish from the swordmage, showing off again but in an effective way. The heroes pause to rest and to resummon their spirit companion before exploring these catacombs. 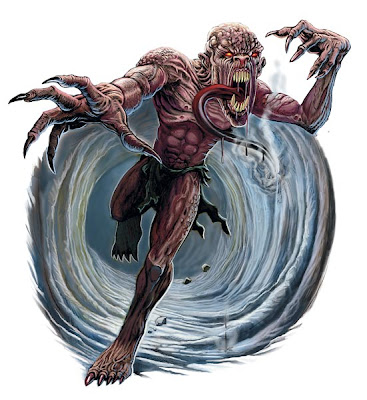 DM Notes: Our new player from last session couldn't make it but Apprentice Who decided to make his first foray into 4th edition and made up (with some assistance) a bow ranger which turned out to be a very effective choice, especially for a new player. With a melee defender, melee striker, melee (somewhat) controller, an a melee animal companion blocking for him he was pretty safe, and he was still able to contribute a lot to the group. He was very happy with his choice. Starting off with the ogre's prisoners made this swapping in and out of characters quite easy to do within the adventure.


Both combats lasted 5 rounds, not too bad for 4E, and did not drag out ridiculously in real time either. Undead are actually fun again in 4E as you don't have the massive swing factor of 3E where either the cleric  blows them away with a Turn Undead or he fails/sucks/is dead and the no-crit/no sneak-attack rule means that the fight goes on longer than most - 4E doesn't see a ton of turning and doesn't do the no-crit thing.


The prisoner rewards give me openings to complicate their lives down the road. Some are immediate - I'm sure some of you recognize the pin - and some are longer term, like the grateful merchants who might have a job or a request in the future - more fun for me.


Anyway, next time: more fun in the catacombs.
Posted by Blacksteel at 12:00 PM No comments: 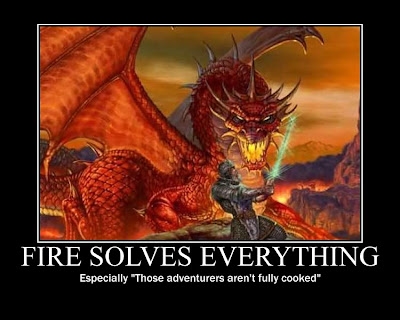