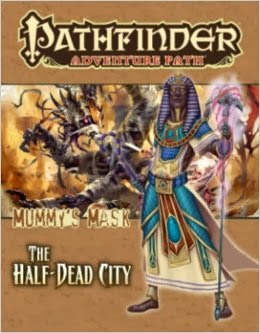 It's spring break here which means more "doing" and less blogging but there is one thing I wanted to get out this week.I have been more and more impressed with Pathfinder and the amazing support for it by both Paizo and by others. Every time I touch it I come to like it a little more. One of the reasons for this is the realization that for me, it's the first time in a long time I feel like I could run a fairly detailed RPG with zero prep time.

First, some background: Basic/Expert D&D, and 1st-2nd Edition AD&D were fairly easy to run on the fly. Besides taking random generation of everything from monsters to maps to magic items as a legitimate way to play the game - something which has thinned out noticeably over the last few editions - these versions of the game had pretty simple monster stats. You didn't really even have a "stat block", you had a "stat line". This made it really easy to include abbreviated monster & NPC stats in the adventures wherever they showed up, with a longer entry in the back of the module or a reference to one of the monster manuals. This pretty much eliminated look-up time and let DM's just run things. This state of affairs made it especially easy when using a published adventure, as you just read the adventure, looked over the maps, tried to get an overview of the whole thing, look up any tricky bits, and you were ready to roll - at least that's how it worked for me.

Now we made plenty of our own stuff back then, and we also used the random generators sometimes as it made for a far less predictable experience. We also played a lot of published adventures because:


Third edition made on-the-fly adventuring much tougher to do by assigning all monsters feats and skills, possibly class levels, and possibly specific weapon & armor types. plus many also had extraordinary, supernatural, or spell-like abilities, all of which tended to force a DM to look them up beforehand or during the session to know what a monster could do. Every monster could end up as complicated as a player character. Trying to run a group of say regular orcs with a tougher orc leader type, a shaman, and a summoned demon was a nightmare in 3E because of all the different special abilities and the fact that each statblock was a fairly long item. The players loved it, but they only had one crunch-heavy masterpiece of optimization to manage. As a DM I had anywhere from 1 to 20 or even more on occasion, and then a new batch to learn and run during the next fight. I ran it for about 9 years but it ended up feeling like work quite a bit of the time.

Even running published adventures (which usually included statblocks) the overhead of keeping up with the options and abilities available to a group of beasties was something that added more "homework" to the game, taking attention away from just running the thing and having fun. It might not have been a problem for everyone, and we managed, but it was less fun (for me anyway) after a while. I had printed index cards of most of the monsters sorted alphabetically in an index card holder because that at least gave me the stats at hand and let me pull out multiple monsters at once as needed as flipping through the monster manual every time you needed to check a new number got really old.

The next edition of the game helped somewhat by keeping all of the stats and effects needed to run a creature inside its own statblock, but I still had to print out those statblocks. The dream of the online reference was not fully realized as the way the monster handler tool was implemented was not really designed for in-play usage, but more for preparation beforehand. That was a huge missed opportunity, as I will demonstrate below, especially considering the amount of time and money spent on it.

So enough looking backwards - what about the whole zero-prep thing now? Well, zero-prep means either a published adventure or a random generator. Right now I am talking specifically about published adventures. I am also talking about Pathfinder, which  is pretty similar to 3E D&D which I just slammed for being unfriendly to this approach - so how does this work?  There are a few crucial tools. Before anything else you're going to need a computer, preferably a laptop, and the usual pencils, paper, and dice. 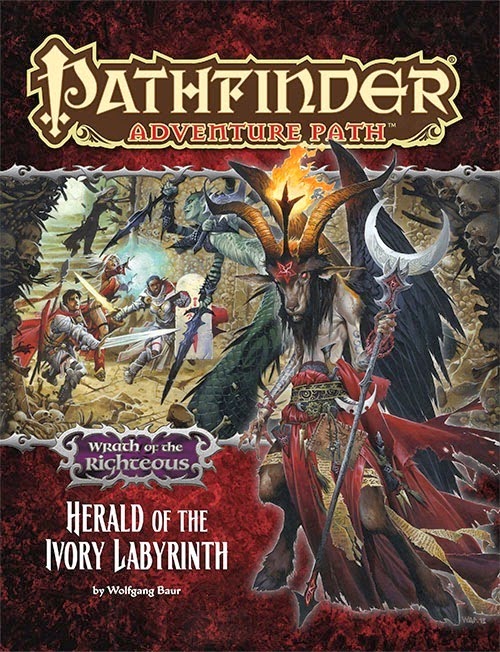 First, you'll need the first volume of one of the adventure paths. Take a look here. There are 14 of them now, hopefully you can find one you like. The PDF's run about $14 and will cover the first 4-6 levels of a party's career. Also download the free Player's Guide PDF for the AP that you've decided to run. Read them both - this is the extent of the prep work you will be doing. Second, you should pull up the d20PFSRD, a really well-done, thoroughly hyperlinked version of the open Pathfinder rules. It's a website and it's free. It's a nice resource to have at your fingertips during play. Also, if you or any of your players are really "thrifty" or just want to try all of this out before spending money on it, this has all of the rules of the game from character creation to combat to monsters to magic. It also may cover some of the expanded rules from books you don't have if one of your players goes off on a tangent. 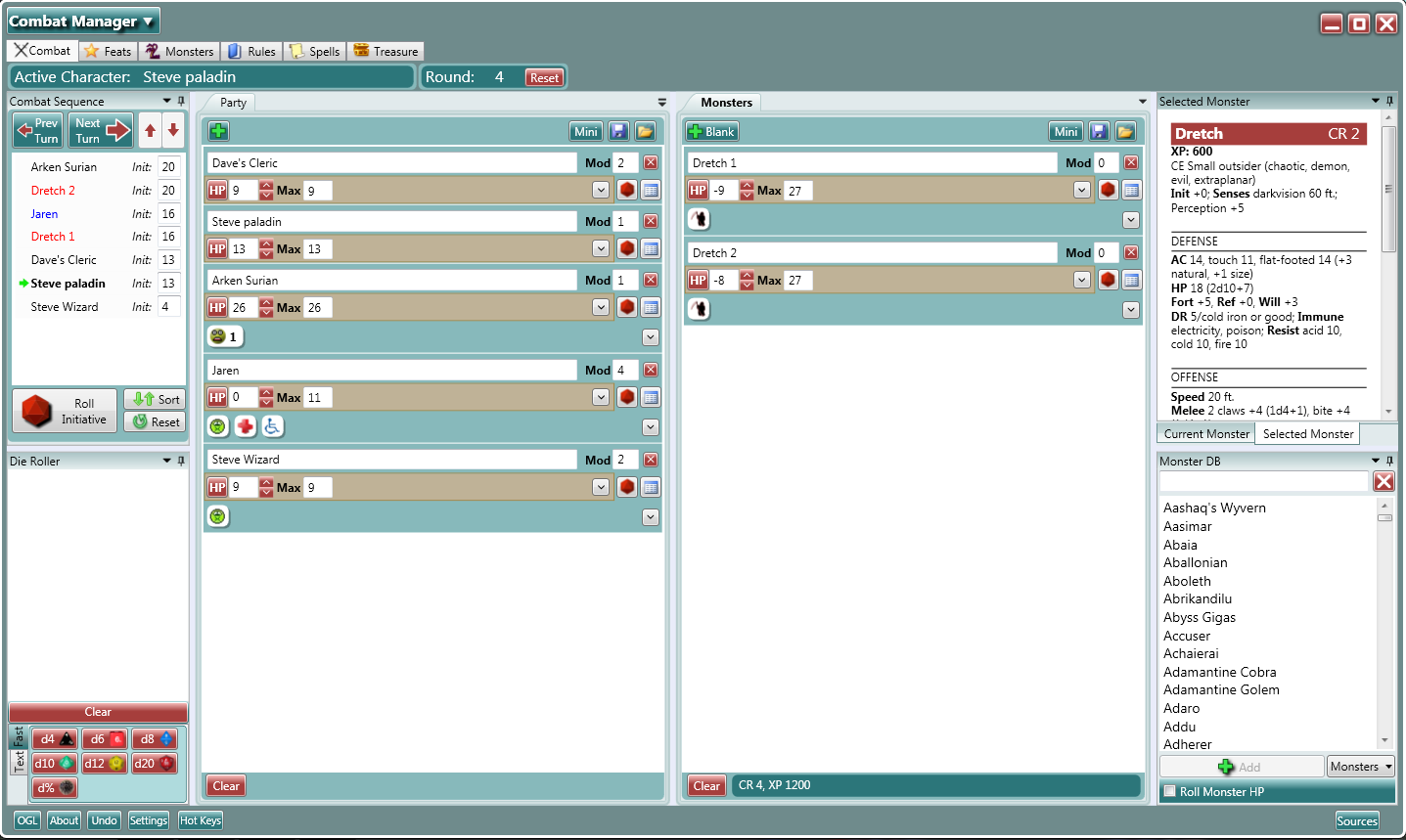 Third, download Combat Manager here. It's free and it's amazing. Also note that it's not an internet application - once you download it then you're running locally, meaning you don't need an internet connection to run the game. I know that sometimes that matters.  This program is really the key that makes all of this work. 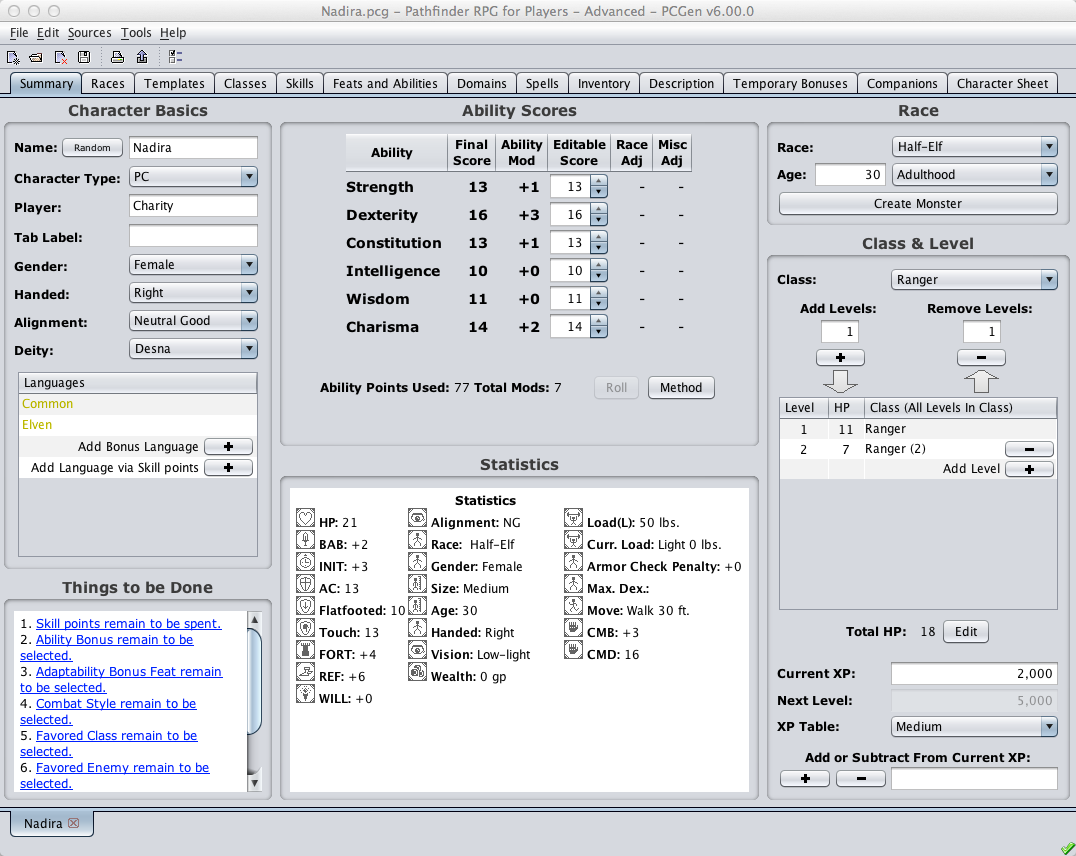 Fourth, get PCGen here or HeroLab here. PCGen is free, HeroLab is not but I think it does some things better than PCGen. Have your players create their characters in their tool of choice and send you the file.


Now, to run the game all you need to do is import the character files into Combat Manager. When the party gets into a fight then the greatest hidden treasure of CM comes into play: All of the monsters and NPCS from published AP's are included in the monster database that comes with the program. You don't have to rebuild them. CM as a tool makes combat a snap to run, with instant access to monster stats, feats, spells, and class features just by hovering or clicking on the relevant text. Having all of the stats you need for combat at hand like that eliminates (for me) the need to try and prepare mechanical notes on different monsters and reduces my preparation to ... reading the adventure. That's it! I don't need cheatsheets or monster stat sheets or a hour in HeroLab to recreate that hobgoblin cavalier/monk.

I have yet to find anything that isn't covered by this package, and all I need is my laptop at the game table to make it work. I have mine sitting on a TV tray next to the table so it doesn't come between me and my players but it would serve as an effective DM screen if I did that I suppose.

So again, the high points:


The best part is that I can make some notes and change some things up and I probably will if I see something in the adventure that I don't like - but I don't have too! I also have damn near zero overhead in-play as far as keeping track of what monsters and players can do on any given round - it's a far cry from having to flip through the book or my old index card file. It lets me focus on the setting and NPC's and any plots or events that might come up and still let's me run one of the crunchiest RPG's out there. I cannot communicate how happy that makes me, but it's a huge win.

Now I'm not saying zero-prep is how you should run a campaign or even the best way to run a campaign. One of my big concerns though when running a crunchier game like this is being prepared for each run. These tools eliminate those concerns. I no longer have to set aside several hours each week to make sure I have all the resources I need to run things. I just read through my notes from last session, look through the section of the adventure the party is currently in, and I am ready to go!

Beyond what I am describing here I am also cautiously optimistic that I could run a conversion of a 3rd edition era adventure on the fly with this approach and that I could run a 1E or 2E adventure with just a page or two of conversion notes on monster types and challenge ratings, difficulties, and treasure. That's not zero-prep but it's less than some of the conversions I've done.


Anyway, that's the epic post for this week. It's a recent discovery for me and really opened my eyes as to what I could do with these things now. I could potentially run several different campaigns a week using this approach and I think that's a remarkable thing nowadays.
Posted by Blacksteel at 3:02 PM 3 comments: 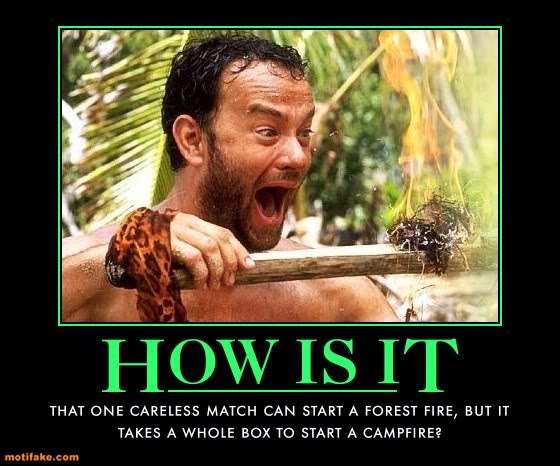 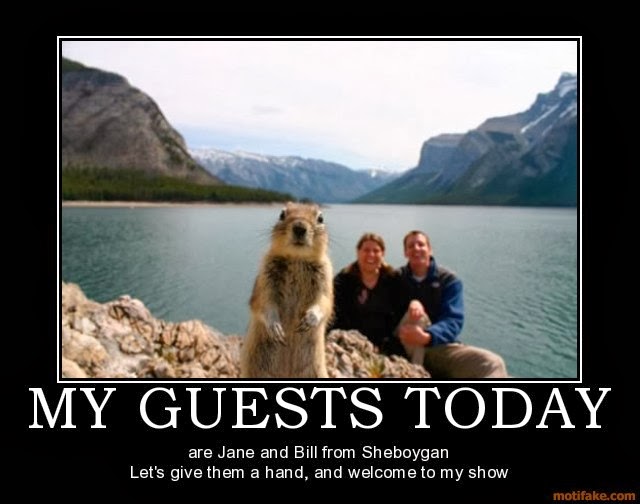 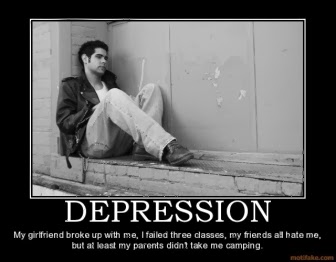 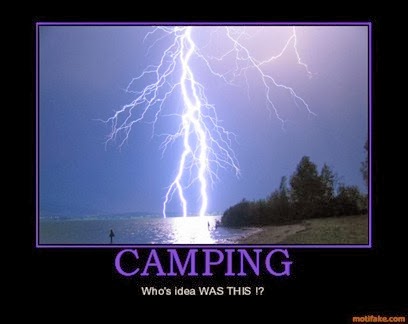 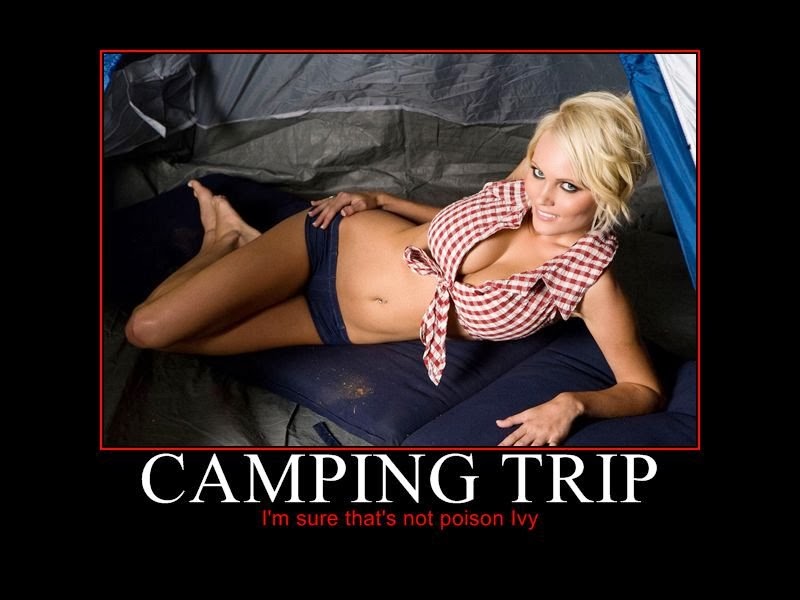