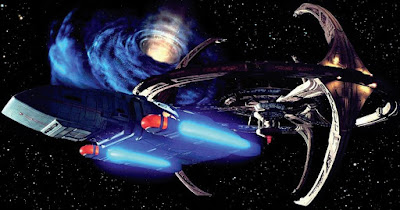 After finishing Battlestar Galactica the week of Thanksgiving Apprentice Blaster and I talked about what we might watch next - Star Trek? X-Files? Original BSG? As it turns out he's been in a Trek mood lately - he's even reading Vanguard! He read the first book in less than a week and took the second and third with him when he left last time. To give him some additional background we watched "Amok Time" and "The Tholian Web" and I figure that should give him some familiarity  with those elements when he runs across them in the books. All of this pretty much made it a foregone conclusion that we were going to go with a Trek show,

We've watched individual episodes of the Original Series and Next Generation and we've watched all of the movies but we haven't really tried to work through an entire Trek series yet. I thought about TOS but he's seen enough of those to get it. We talked about TNG but he's seen a fair number of those too. Enterprise and Voyager came up too but what I thought was the best option - and he agreed after some discussion - was Deep Space Nine.

Why? Well, for one thing I haven't watched much of it  since it was on the air the first time and I wasn't religious about it then, so for me it's a nice combination of interest and broad familiarity but not deep deep experience as it would be with TOS and TNG where I've seen every episode multiple times. For another the man behind the newer BSG (Ron Moore) was also a major player on DS9, so there may be some familiar themes showing up. At the very least there's a very strong serial factor.much like BSG. Finally, the later seasons do get into a war story that I remember thinking was pretty good and I know he will like it. Of course we have to get there first and I told him the shows builds up nicely, pays off on what it promises, and has a pretty decent finale too.

So we have started the first season of DS9. So far we've watched the two-episode pilot and the first two regular episodes. There's no Worf, no Defiant, no Great Link, no Dominion, and Dax is still Jadzia not Ezri - writing that list just reminds me how much this show builds/changes/grows during its run. The Cardassians are the designated bad guys, the Klingons have shown up once in the form of the Duras sisters, and Quark is not as sympathetic a figure as he will eventually become. I don't think any other Trek series shows this kind of "evolution" over the seasons. TNG gave us many of the important elements at work here, but DS9 is where we get to really dig into them. For example TNG gave us the Ferengi but DS9 is where they turn into an interesting, nuanced race. 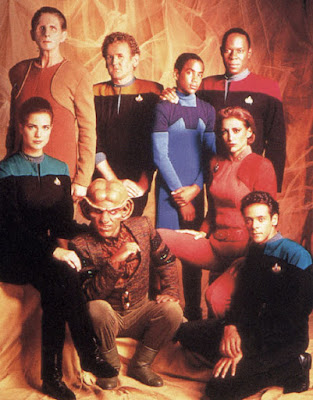 I am really looking forward to making this journey again - this time with one of my kids. We have a sort of bet on whether we can make it through all 7 seasons by the end of 2016. I think we can, he's not so sure. Either way it will be fun to look back at this time next year to see how far we have progressed.
Posted by Blacksteel at 9:47 PM No comments: