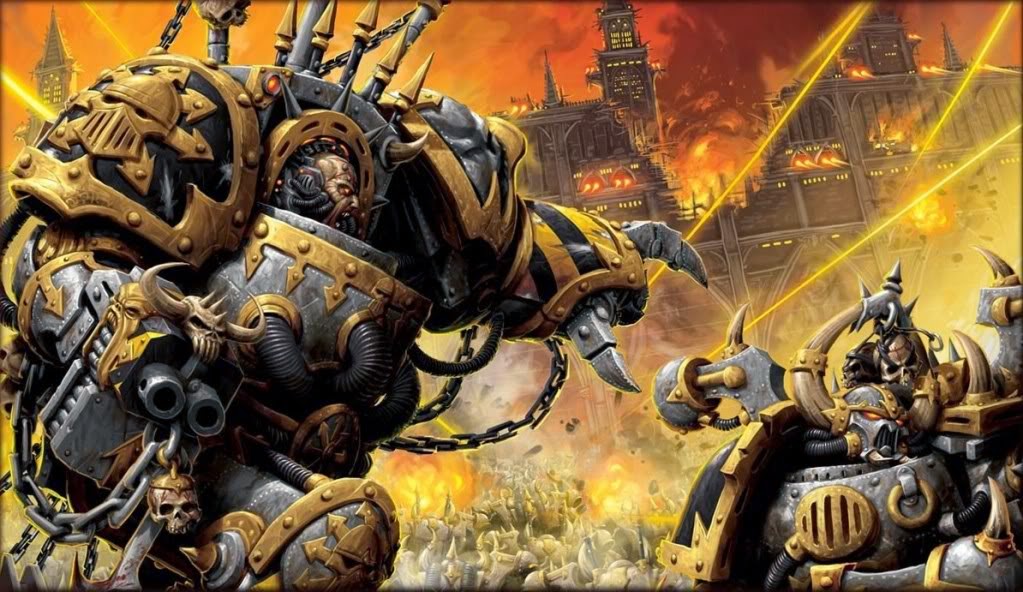 There hasn't been a lot of 40K action around here lately. Fall gets busy with kid stuff once school is back in session and a lot of weeknights and weekends are spent on those things. Plus the sacred Sunday rituals must be observed, especially when the Cowboys are playing well.

BUT - when we can't play, we paint! Or ... we pick up more mini's. I talked about what I was doing with my slowly growing Chaos Space Marine force a few months back  and I've made a little more progress since then. The converted spawn are coming together, I picked up some interesting cultists miniatures (already painted, thank goodness), and I've added a small contingent of Iron Warriors.

The spawn unit is 5 spawn with the mark of Nurgle. With that and the bikes it gives me two fairly speedy, tough units that can charge across the field and hopefully do some damage. They are not a complicated unit to build or to use but people seem to have decent results with them. 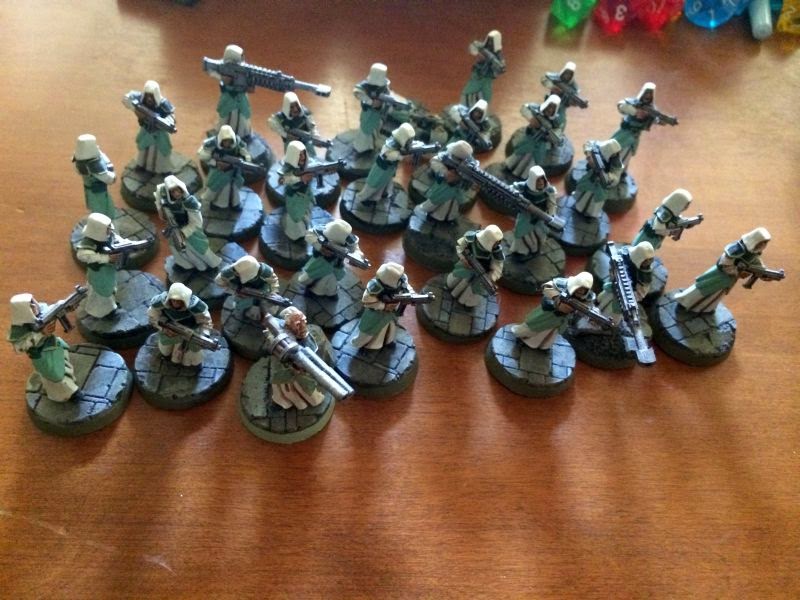 The cultists are painted green and white so they fit with the Death Guard theme of the army. They are not GW cultists - I like the hooded look better. Thirty of them gives me some flexibility in going with multiple squads or one big squad. Mechanically, well, they are not a power unit. They're a cheap troops choice to allow me to take other more effective non-troops units. Taking the long view though it makes a lot of sense to have a unit of cultists available.

The Iron Warriors came about when I started looking for ways to expand the army beyond just the Nurgle forces. IW's were huge in 3rd edition as they had some special rules that allowed extra heavy support choices compared to other chapters - more vindicators proved to be a popular choice. Armies from that era still show up from time to time on eBay. Allowing for a little "chaos" almost any IW painted unit looks right next to another painted IW unit. Going with them as an additional force alongside my nasty green marines diversifies the army a bit in both look and in the types of units each might take. 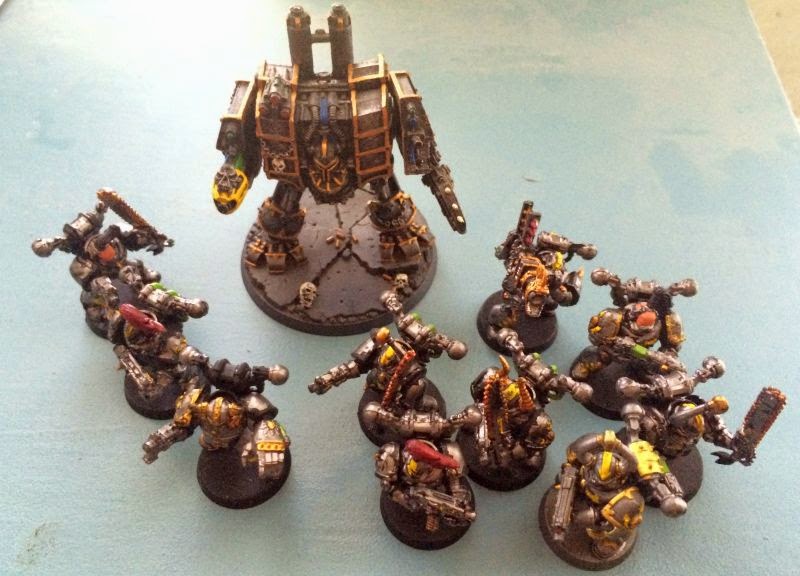 As a squad it's a mixed bag because I agree with the popular view that the traditional 10-guys-with-a-heavy-and-a-special-weapon is not the greatest anymore, especially with the lack of combat squadding for CSM's. That's how these were built though, and as I add more options I may be able to change it up some. I also know that dreadnoughts are not all that effective in the current rules but a)I've always liked them, b) that's the only combination of stock parts I like on those old metal chaos dreads, and c) it seems appropriate for Iron Warriors to have at least one.

I have acquired some unpainted chaos marines as well and some parts. Some of those may go towards options for some of my existing squads (more double plasma/melta/flamer) but I think I can put together at least one full squad and it will likely be Iron Warriors as well.

Down the road it would also make some sense to add a couple of Maulerfiends to keep expanding the "fast assault" approach I'm working on here. An IW look on those would be pretty cool. If I later decide to turn the IW into their own separate army then tanks would make a lot of sense too but that's a ways off yet.

More to come - I'm going to try and get some more painting in this weekend and see how much more I can do to get these guys ready to jump on the table.
Posted by Blacksteel at 5:00 PM No comments: 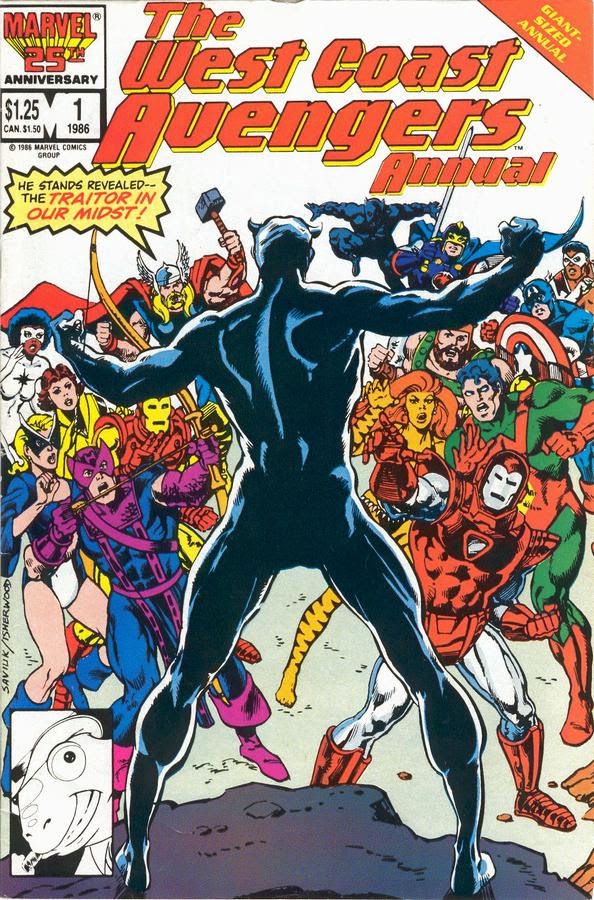 Barking Alien and WQRobb have had some good ideas over the last week so I thought I would jump in to with my own "Appendix N" for superhero gaming. BA's details:

Alright. I will preface this by saying that while I haven't run a continuous, sustained supers game in quite a while our ICONS games are all set in the same continuity, our Marvel games were a single "campaign", and my ready to launch M&M campaign will be that elusive ongoing game at some point. For any of these, here is my list of inspirations: 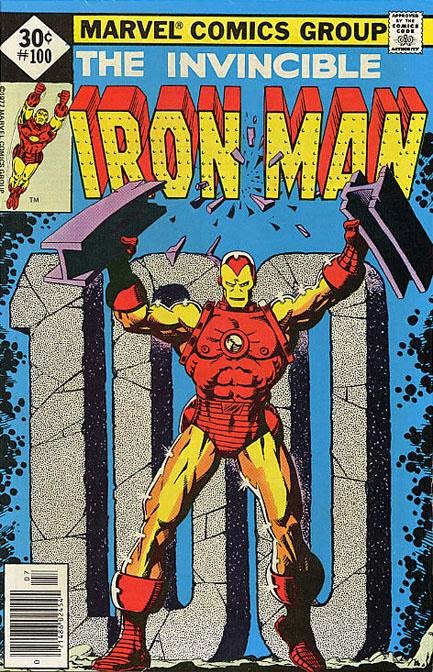 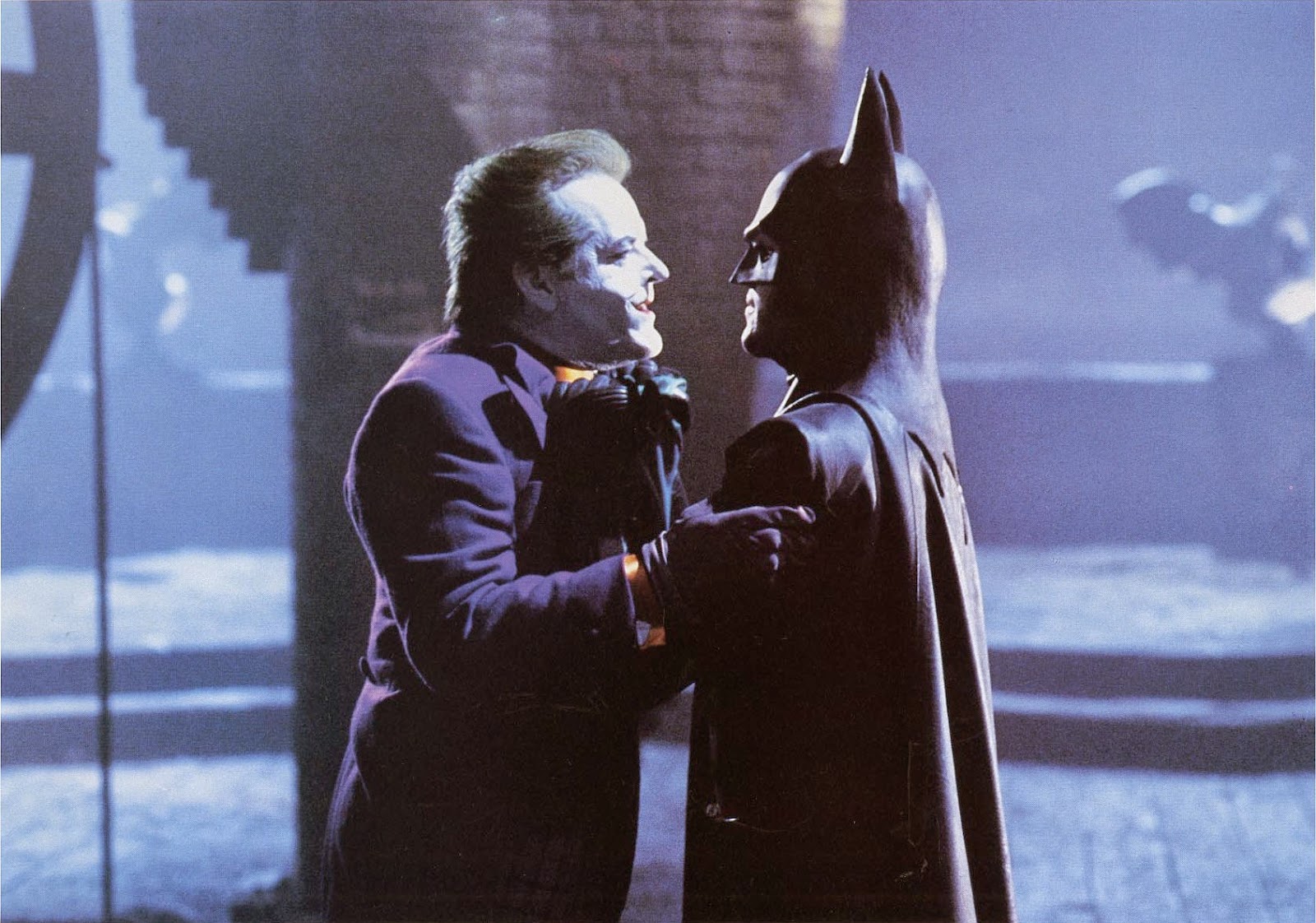 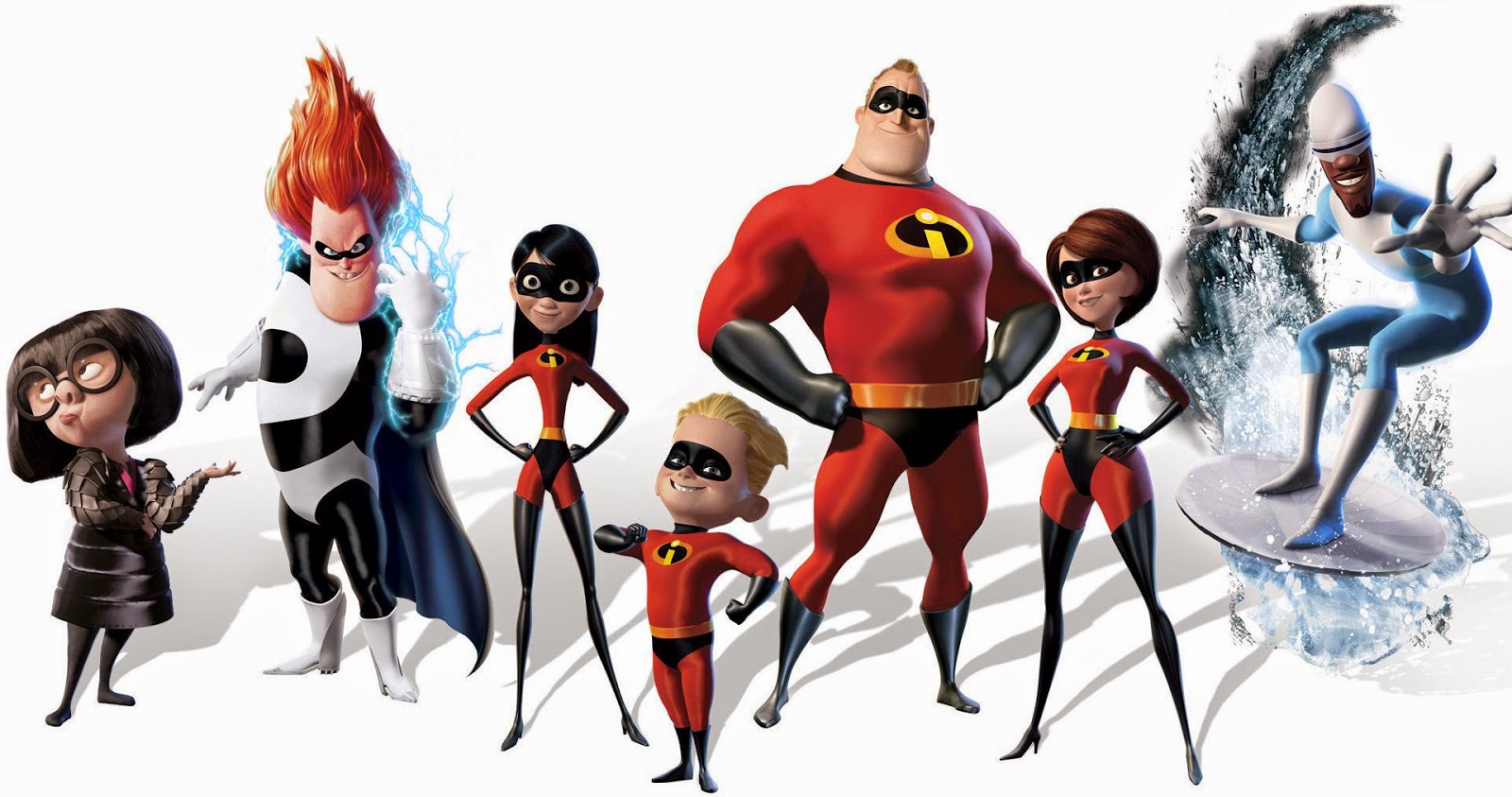 I'll give City of Heroes a separate place of honor as it showed me a whole new way of presenting superheroes in a game format that just worked and was a lot of fun. 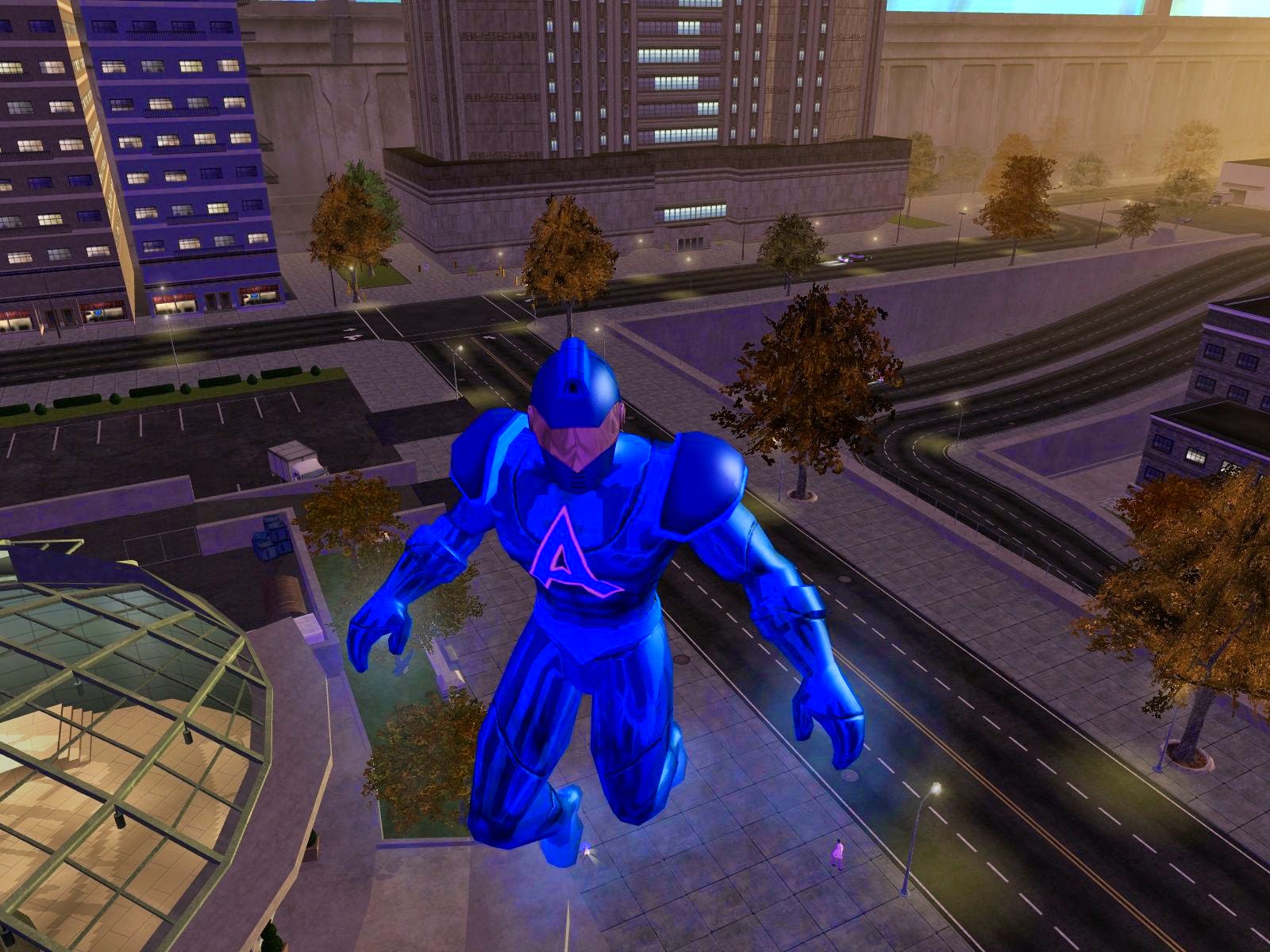 I'd say the biggest thing missing here is all of the dark stuff especially 90's+ Iron Age type stuff. There is some good material out there but it's not the game I want to run. I also tend to gloss over the more intensely real-world angles like you see in Civil War. Silver to Bronze Age, from the naive super-science solutions to every problem and the numerous ape-villains to the early appearances of the grittier heroes, that's my target. There's a lot of black and a lot of white and not much gray.  Death is not a common or usual outcome. If your concept is a drawing of a costume you thought would be cool then that's certainly just as valid a place to begin as anything else. We'll likely add more depth but we'll have some fun getting there. My ICONS games in particular I think of as akin to the animated shows like Justice League and I have more on that here.

There are so many I'm leaving out but I think this is a pretty good sampling of my influences. Who's next?
Posted by Blacksteel at 12:00 PM No comments:


I put up a post about the new Flash series yesterday and after watching the first couple of episodes I started thinking about the terrible record of live action superheroes on TV and the signs of a bad show. That's today's post...

My introduction to superheroes was through the live-action batman series when it was on re-runs in the early 70's on TV. Some of my earliest memories are watching that and Speed Racer and then going and playing with toys and friends and talking about what we had seen. I saw this stuff before I ever picked up a comic book or saw a movie or watched a cartoon with caped heroes. That makes it important to me.

In some ways the Adam West Batman started the whole idea off on a peak it has never been able to match again: Costumes! Sets! Villains! Vehicles! Gadgets! Narration! It looked remarkably like a comic book on-screen. Sure there was some camp to it, but they played it with an amazing mix of straight yet sly and it worked.

I later saw the 50's Superman series and looking back it was pretty decent too. The effects worked. the actors and characters were decent, and though most of the plots were (again) thugs and gangsters there was enough super-stuff to keep it interesting.

Later in the 70's it looked like we were headed for an amazing run: Captain America, Spiderman, and Hulk, and Wonder Woman all had live action shows in prime time.


The 80's didn't have much in the way of straight-up superhero shows. Knight Rider was sort of a comic book show but still suffered from the "thugs & crooks" problem until Garth, KARR, and Goliath showed up. There was also a syndicated Superboy series that was just a mess though it does have some fans and did get into supervillains and more comic book style plots. I still rate it below Batman and Wonder Woman.

The 90's seemed hopeful as well as pretty early on we had Lois and Clark and a Flash series.
The new millennium brought us Smallville, among others.
Having experienced most of these shows for most of their runs I thought I would share some pointers on How To Tell You're Being Fed A Crappy Superhero Show:
Beyond this, here are some signs that it might actually be trying to get things right:
I suppose one of my main points in all this is that so very many of these shows have been bad - really bad, apparently with the assumption that putting a superhero in it makes that OK. It doesn't, as the short runs of most of the worst shows proves. Especially nowadays when people are used to seeing decent superhero movies on the big screen. People like this stuff when it's done well. If you're going to spend the money and make the effort, how about making a good one - it could pay off big time.

That's probably enough for one post. I'll look at the shows on-air right now in a future post but these are the concepts I like and dislike when it comes to them.

Why "The Flash" Doesn't Suck 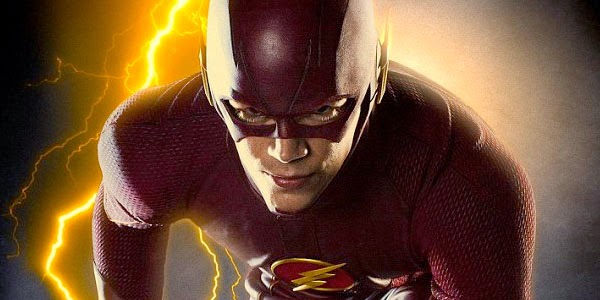 Live-action super hero shows on TV have a mostly bad history. From decades ago through today most of them have been mediocre to terrible. I'm working on another post about that history, but today I thought I'd spend a minute praising a show that (surprisingly) is pretty good: The new Flash TV show. Why doesn't it fail when so many others do?

So yes, I am, somewhat surprisingly, a fan of the new show. I didn't like what I saw of Arrow but I may have to give it another chance as this show sort of spun off from that one. That one is more "closeted superhero" while this one is openly and triumphantly a full-on colorful superhero production. I'm looking forward to more.
Posted by Blacksteel at 12:00 PM 4 comments: 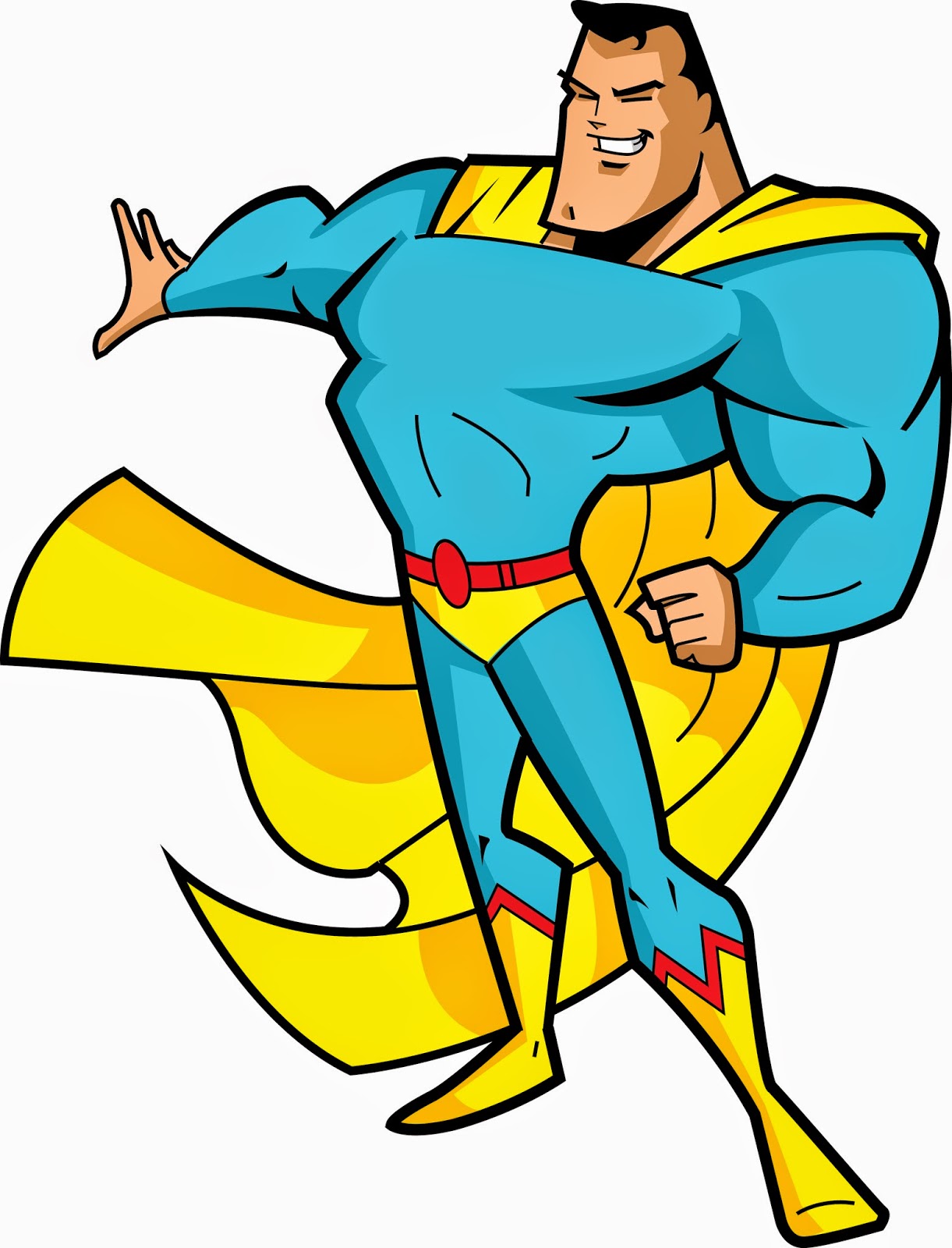 I have some ideas on superhero stuff this week so coming up: a series of posts about superheroes! Also: I might get back to 40K on Friday.
Posted by Blacksteel at 9:00 AM 1 comment: