The Greatness of the Game of Thrones Dragons 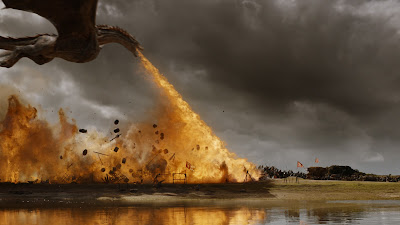 I was talking to a friend the other day about fantasy TV and movies and one of the things that came up was dragons - mainly how poorly done dragons have been in most TV and movies yet they are somehow still cool. The outcome of this was that dragons Game of Thrones has really amped up the presentation of dragons over the last few seasons, to the point that I think it has the best dragons ever presented on film.

Warning: There are many spoilers and many pictures in this post. If you haven't seen seasons 6 & 7 and want  to enjoy them naturally, do not continue. Think about the major movies that have used dragons in some important way. I can think of four main movies:


Honorable Mentions:
So Dragons have been ... iffy ... over the years as far as being fearsome magical fantastic beasts, at least in movies and TV. 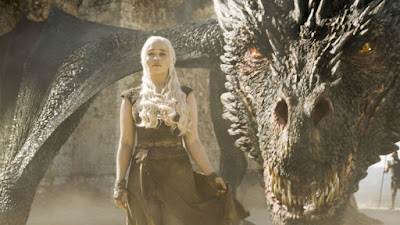 Game of Thrones has completely overcome this and set a new, much higher standard. Daenerys has three dragons who started out as eggs, then hatchlings, then dog-sized, then horse to elephant-sized, and in this last season or two are finally the awesome army-smashing beasts they should be.

The first time we see one in action is Season 5 episode 9, "Dance of Dragons" - The Queen and her companions are trapped in an arena as a rebel faction that dislikes the changes she has been making seize this moment to try and assassinate her. It looks pretty grim - then she closes her eyes and seems to be concentrating and then we get that awesome moment with fire, a roar, and an angry dragon making his entrance ...

Even here he's say elephant-sized. Big enough to ride but not humongous. It also demonstrates that they can be hurt by weapons, at least a little. He gets hit by several spears and clearly feels them but they don't really seem to slow him down. It's a great scene and marks the emergence of the dragons as an actual, not just a theoretical, threat.

The next time we see them in a glory segment is in Season 6, episode 9 "Battle of the Bastards". Everyone remembers the other big fight in this episode but the dragons get a nice sequence here where everyone learns that wooden ships are not a great weapon against fire-breathing opponents,

This is the kind of stuff we didn't see as much in the early seasons of the show. It's the kind of thing that makes it a fantasy show and not an alternate medieval history series.

The next big scene for them is in  "Spoils of War", Season 7 episode 4 where we learn that supply trains and foot armies are vulnerable to even a single dragon - oh, and a screaming horde of barbarians.

They're huge, they're terrifying, they're nearly invincible ...

Even a hero can have a hard time facing one down:


Sadly, they are not invulnerable, and about the time they start fighting, you know they're going to get hurt. Mortal opponents and weapons seem to be painful but not all that dangerous to them. Then, they had up north for the first confrontation with the Night King in a sort of Black Hawk Down scenario.

The white walkers have been really well done here too. Also - flaming swords! In combat! Plus an undead polar bear attack! It's a great episode. So much more fantasy than most other shows or even movies ever get too. Easily the best look and best story and characters since Lord of the Rings.

Surrounded and facing the ultimate bad-guy-lich-thing of the setting, what do you hope for?

Look, fire breath works just as well on the undead as it does on the living! All 3 dragons are in full action here, flying and flaming. Unfortunately for our heroes, the Night King knows about dragons and is not without a means to deal with them.

It's a shocking moment as the dracos have been unstoppable so far on the show,  It's sad, amazing, and one of the highest and lowest points on the entire series to date.

Even more amazing, you know it's not going to end there. I mean, he animates the dead, you know?

To conclude: Game of Thrones is an amazing show and has only gotten better over time. These last few seasons, the last two in particular, have really turned it into an epic fantasy show with dragons, undead, giants, magic weapons, and barbarian hordes fighting knights ... it's just the most fantasy thing on TV now or ... really ever. It's just spectacular. The dragons are at the heart of it, awesome and inspiring - as they should be.
Posted by Blacksteel at 1:00 PM 3 comments:

The New Campaign or "What do you do with an entire Saturday Free?"

Lately my group had been in a low spot as far as RPG activity - schedule changes and conflicts meant we had not been able to gather for a few weeks for Star Wars or anything else. I'm still getting in 40K time with Blaster but RPG time had really died off. I'm not part of the cult of "The Busy" that loves to go on and on about how they don't have time to do anything and wear it like a badge of honor - I actually do get annoyed when everything else gets in the way of fun time - but it's something we all deal with at some point.

Miraculously the schedule wheels aligned and we discovered that I, Blaster, and Paladin Steve all had Saturday free of all obligations. We realized we would easily have a nice 10-12 hour window. Naturally we started figuring out what we could do. Now we don't lack for campaigns around here - see sidebar at the left - but each of those is tied to a certain group of players. Still ... 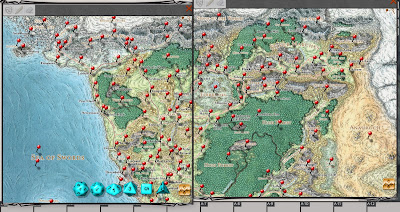 Well, what the heck - let's start a separate 5E game! Instead of old school sheets/roll up your stats/play in Greyhawk we will go new school modern sheets/point buy/run it in the Forgotten Realms. I've read thru most of the new 5E adventure books and I really liked Storm King's Thunder so let's do that! Why do I like it?

So that's what we did and ended up going from 1st to 3rd in this one session. It was tricky with just a few days prep but then again it is D&D and I've been doing that for a pretty long time.

The other new wrinkle was that Paladin Steve's 10 year old has been wanting to play and has gotten his feet wet with some Pathfinder games at home and so we had an eager new player joining us in this one. More on this and the particulars of the session later.
Posted by Blacksteel at 12:07 PM No comments: