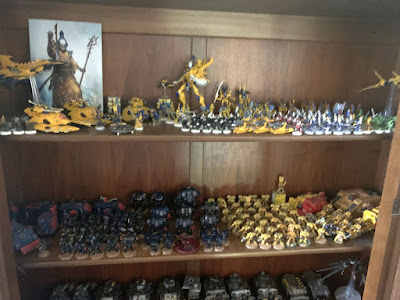 It has been a while since I made a 40K post but that doesn't mean I have not been active so I thought I would share some updates.

We have played a few more games since my march post and the focus has been on Crusade. I played Orks and blaster played his Ultramarines primaris force but I expect we will branch out soon. With no ork codex I was just using the core book options and I thought it was still a lot of fun. More on that to come later.

The majority of the effort this year has been on "finishing". I have armies that have been sitting around half-done and maybe not even in a playable state for years. It's stupid at this point in my 40K "career" to have this much unfinished so I wanted to make an effort to clean things up this year. I have way too many armies but with a little focus I should be able to put a dent in things. Blood Angels, Crimson Fists, Dark Angels, and my Iyanden Eldar have all received a fair amount of attention. My method here is to pick one army and for the next month spend most of my workbench time working on them - building the unbuilt or half-built units, finishing the half-painted or 90% painted units, and then making sure some things get finished - decal-ed, clear-coated, and based. Done.

Now to aid this plan I also made a vow in December: "No new armies this year". Well for 40K anyway. With a wave of codexes coming for the new edition I knew I would be spending money on new books, new cards, possibly a new unit if one was released for a particular army - I really do not need to be building up a new force to leave half-finished for the next few years. That said I bought heavily into Flames of War around that time and it remains, uh,  "very low mileage" let's say. Those starter sets are still a great deal.

I did manage to hold onto the vow for a month or three. Then I realized this was probably the best time in the history of 40k to pick up some Necrons as they had a major refresh to the models and are in 4 different starter set boxes right now. I looked around online and, well, the prices were right. So I have a Necron army now. In a concession to my plan for the year it remains unassembled. It's roughly 2000 points so I did not go completely nuts. I know how I want to paint them too so when it's time I should be able to get going easily. 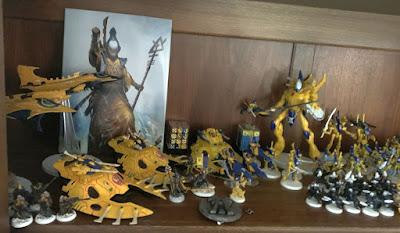 Orks
I have not really added a whole lot to them this year as I have quite a backlog of TBD units. I don't feel like I am missing a lot of units that I would want to play and our Crusade campaign has let me get them on the table again and shake off some rust. I built some nobz and a banner nob and I finally added a warboss on a bike but that's about it ... oh and the new Ghazghkul!. With a new codex coming and new boyz coming and a whole new group of ork units coming I feel like it's worth holding off a bit until I see what the codex looks like and then prioritize based on that. I'd like to get my Goffs completely finished and then start getting my Evil Sunz together as a coherent force. Then I have an idea for a customized Blood Axe army that could be a lot of fun too. It never ends, especially with these guys.

Imperials
My biggest mistake in 40k was buying into too many marine armies over the years. If I had stayed on 1 or 2 I would be in a lot better shape completion-wise. 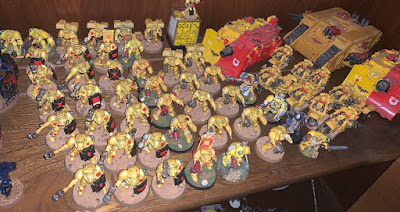 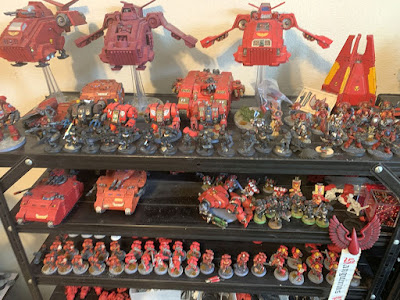 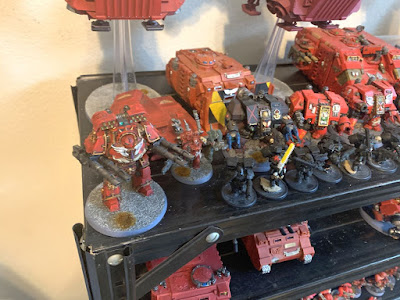 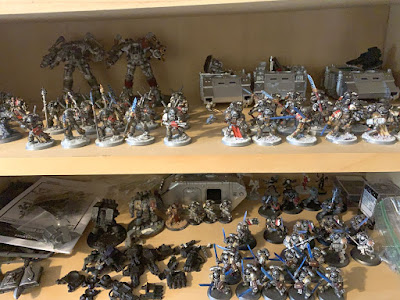 Beyond adding the killer robots I built up my Nurgle Daemons quite a bit early in the year. I've had the daeon prince and the soulgrinders finished for a long time as an allied force for my Khorne daemons - why not make a usable all-Nurgle force? So theyhave a great unclean one and a bunch of plaguebearers and the big flying bugs and a ton of nurglings. It should be a fun force though a lot of it is at varying stages of unbuilt, built, and painted. This was more of an acquisition effort, but it means my chaos daemons are in really good shape now with a sizable force for all 4 chaos powers. In 2018 I was building Khorne, 2019 was Tzeentch, 2020 was Slaanesh, and this year was Nurgle. This was also sort of laying the groundwork for when their new codex comes along as I will have a decent force with options ready to go and new ones waiting depending on how the updated army works.  The daemon bonus is that they are fun in Age of Sigmar as well so you can get double duty out of them if you play both.

Not a lot happened with most of the rest of the Chaos forces: