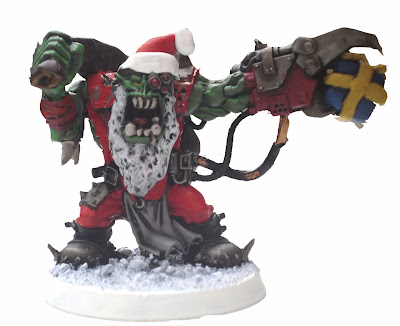 This is the last day of school for the kids before the holiday break. We haven't had a chance to play this week - somehow being off for a while means a bunch of extra work to prepare for being off for a while, and of course the schools have to cram in every possible activity too so the evenings are packed as well - but they have asked for some 40K stuff for Christmas and I thought I would talk a little bit about that.

Blaster wants some more terminators for his Space Wolves. He's interested in trying out a "Loganwing" army in the aftermath of yet another Deathwing beatdown. The kid has a pretty solid Wolf army already so now he's getting into that next level of play - adding a unit or two that will let you totally change up your approach. I'm just glad that they haven't been totally forgotten in his rush to the Eldar.

Regarding Eldar he has been playing them most of the time lately and asked for more Dire Avengers. All the cool exotic stuff in that book and he wants ... troop choices. I admit he's doing it right - make sure you have solid troop choices then build up to the fancy stuff. I'm pretty sure a wraith knight is going to be on his birthday list in a few months so maybe we'll deal with that then. He's still refining his army, playing a lot of "bring what you have" as his army is still fairly new. I say new, but he's pushing towards 2000 points of stuff so it's not exactly small. Now to get it all painted ... 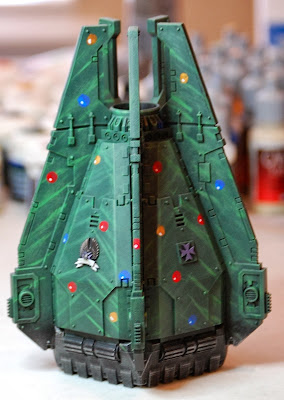 Red is looking to add to both his armies. For his Necrons he's decided to build the world's first Necron Waaagh by taking something like 80 warriors in 4-5 groups with lords of some kind in each plus his wraiths and some other weird necron stuff I don't worry about until I need to shoot it. It's not a conventional strategy and it's not a cheap one, though it is cheaper than some as warriors are not terribly expensive second-hand. He's only about halfway to his goal so we'll have to see how that turns out.

For his Orks Red needs more shoota boyz, a sensible choice in this edition. I also pointed him in the direction of nob bikers since he is building his orks as Evil Sunz and we will see where that goes too. He does like Ghazghkull and his battlewagons full of boyz and nobz so the bikes may not be a priority for a while. He did ask for some Kans too and that might be an interesting option with his already vehicle-heavy army. He and I are both waiting for the new Ork codex to really crank things up. 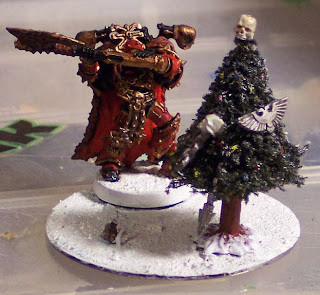 Apprentice Who has finally shown some real interest in 40K as well. He is younger, so I haven't really pushed him on - we have plenty of superhero stuff to talk about so we don't really need to force the Grim Darkness on him until he's ready for it - but he's been hanging around and asking questions during games and announced he's interested in playing something with "big monsters". The Helbrute from the Dark Vengeance set keeps catching his eye. In light of that I let him look at old and new codexes and battle reports for the Chaos Marines, Chaos Daemons, and Tyranids. He seems to like the new marine stuff like the mauler fiends and forge fiends, and the daemon princes are pretty slick looking too.

This of course leads to the potentially awkward scenario on Christmas:

"Hey grandson what did you get for Christmas?"

"Hey grandma I got a Bloodthirster of Khorne! He fights for the blood god!"

This kind of thing comes with the territory of being the dad who's into this kind of stuff but it's a fair step from action figures and Pokemon to shouts of "blood for the blood god" on Xmas morning. The family has mostly learned to deal with it but it's still a little uncomfortable at times when it comes up around the uninitiated. As long as the kid's happy though it's worth it. 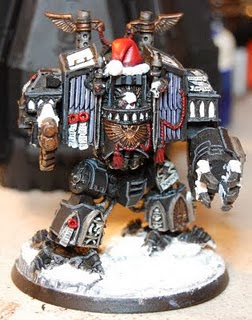 As for me I picked up a few deals on things to try and whip my Blood Angels army into shape. I know they aren't in great shape mechanics-wise right now but they're cool, I have mini's I can use for them, and they will be getting a new codex one of these days. Phase 1 of my plan is to get the infantry part settled out. This is mainly assault squads, terminator squads, HQ's, and the death company. Phase 2 will be the vehicles - a Rhino or two, Baal Predators, Vindicators, Dreadnoughts, and Storm Ravens. That part won't be cheap, so I want the core grunt force figured out first. Phase 1 is now mostly handled, Phase 2 will happen next year.

My other more recent add-on is building an Iyanden wraith army. I've seen a lot of Eldar armies with the new book but I haven't seen many old-style ghost armies. I've liked the idea since the Craftworld codex brought it in as an option back in 3rd edition, but I never tried to build one. Now I am going to. Going this route also keeps me from stepping on Blaster's toes as he's going for more of an "everything" build with a tendency towards footdar.

One other consideration is that so many of my armies contain older models - and I like them plenty - but it would be nice to have an all-new army: no legacy models that I have to identify to kids younger than they are, no old paintjobs from the 80's-90's, just shiny clean new models with new paintjobs that match. Every army I have includes mini's going back to the Rogue Trader days - only my Imperial Fists Deathwing army does not but I didn't really build or paint that one, though admittedly that was kind of the point. This one will be built ground-up by me and while I might be open to a few pre-painted units I want the bulk of that work to be mine as well.

So in lieu of a battle report there's a different kind of report - Happy Holidays! 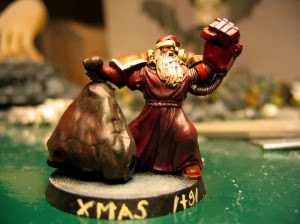 
There's a nice broad range for you. I'm guessing Gen Con or right before Gen Con.

Players will be immersed in rich storytelling experiences across multiple gaming platforms as they face off against the most fearsome monster of all time.

The Winter Fantasy con is in February and I expect we'll see some actual dates announced there.

My take is ... I don't know ... there were things I liked in Next and things I didn't it's difficult to tell from all the versions of the rules we saw, plus their weekly Q&A, plus various interviews, what we're really going to get when the dust settles.   I'm having a hard time getting excited about it. Just not that amped-up at the prospect of buying the PHB-DMG-MM all over again, not to mention the inevitable fighter book, wizard book, Forgotten Realms book, Eberron book, special combat rules book, and all the rest. The editions may change, but the marketing plan does not.

Between the 4th Edition stuff I still have to finish, the Pathfinder stuff I am running, and the occasional foray into Labyrinth Lord I'm going to need more than "Hey it's new D&D" to get energized about this one.
Posted by Blacksteel at 11:20 AM 2 comments: 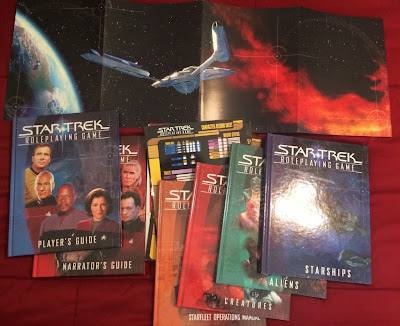 Getting back to the big glossy editions of Trek RPG's, it's time to talk about the Decipher years. The genesis of this one is a little strange. Last Unicorn had been publishing their edition of the game for a couple of years when in 2000 the announcement came out that they had been purchased by WOTC. Within a few months WOTC/LUG lost the Trek license, supposedly because there was a clause against the same company having both the Star Trek and Star Wars licenses which WOTC now had.

Regardless of the details a new Trek game appeared in 2002 (roughly a one-year gap) from Decipher of all companies. Decipher had been known only for card games up to this point, so it was a surprise. Considering they already had the Trek license for card games, it did make some sense. One interesting thing was that quite a bit of the design team from Last Unicorn made the jump to the new edition - take a look at the credit pages below:

There is a lot of overlap there. So you might think "lots of continuity there" right? Well, not so much. Despite having invented a whole new system and written multiple books on Trek just within the last 5 years, the design appears to have looked more at a different system that was popular at the time.

The stats shift to six familiar-looking basic attributes plus some others. Task resolution also looks familiar (and I don;t mean Traveller) being 2d6 + modifiers (lots and lots of modifiers) to beat a target number set by the difficulty of the task. It's shifted down about 5 points from the d20 difficulty numbers but it looks very familiar. This was during the height of the d20 boom and the system for stats, skills, and task resolution is very similar to d20.

Action Rounds are 6 seconds long and characters can take movement actions, combat actions, free actions, and full-round actions - not really trying to hide it at this point were they?

There is a some chrome here. There are Traits which are like Advantages/Disadvantages, there is a hero point mechanic and a reputation mechanic, combat uses a damage track as well as simple hit point type damage to introduce some damage effects,  and of course there is star ship combat as well. 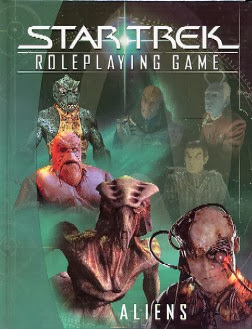 So it's very much a d20-styled Trek game. You might think that would have taken off bigtime in that particular time. Well it didn't. They produced very nice full-color hardback books, six of them and a narrator's screen from 2002-2003 and then it got quiet. Considering the ready availability of these books in bargain bins and overstock deals circa 2005 I think it's safe to say this did not do well. It's not hard to see why:

Looking back I think if the design team had taken this as a chance to refine the ICON system, or if they had gone full-on d20 system, then it probably would have sold better as at least there would have been some built-in audience for the new game. Given the timing of its release I'm not sure it would have mattered but I can't help but think it would have helped in some way. 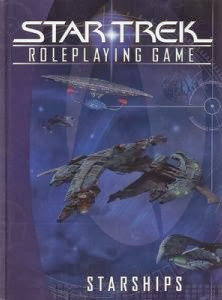 Personally I've never run a game of it. I tried - twice. We never got past character generation in either one. I tried selling it to my group once many years ago and it never took off. I tried it a bit later online and that never got off the ground either. I don't blame the system for those but that is the extent of my experience with it. Hey, I tried ...

If I was going to start up a campaign now I suspect Decipher's game would be several notches down the list even though I have the complete pile of stuff. It's fine and has plenty of material in the books to support a campaign, but so do most other Trek RPG's (official and unofficial). I see stuff in the other versions that I like better. I don't see much support for it online and I suspect it's just not as popular even now as the other options.

That's about all I have to say on Decipher Trek. Next week we will see what else is out there.
Posted by Blacksteel at 12:00 PM 3 comments: 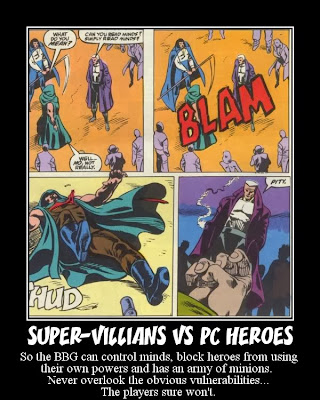