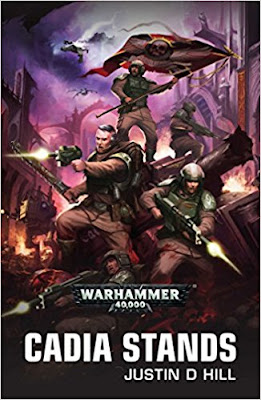 This is another of the "current events" books for Warhammer 40,000 similar to Dark Imperium ... which I realize I never posted a review of on the blog so that will be coming later in the week!

The focus this time is on the battle for Cadia which is assaulted and finally destroyed during the 13th Black Crusade which is one of the big new timeline advances that arrived with 40K 8th edition. Cadia has been the "cork in the bottle" of the Eye of Terror (home of many chaos space marines) and the home of the famous imperial guard Cadian Shock Troops. This book covers events during it's fall.

The Good
If you wanted more detail on what exactly happened with Cadia, how a bastion of the Imperium could fail, this books covers it though only from the imperial point of view.  Abaddon is doing things beyond just throwing troops and ships at it this time but there's not a lot of discussion of what he's doing, why he's doing it, and why it works - it's mainly about imperial forces reacting to the attack.

The Bad
At a big picture level, there's not enough ... big picture. The books is presented in chapters, and starts off with a fairly consistent narrative covering a few units of the imperial guard - mainly their leaders - but then about halfway through the story it just shoots off in a bunch of different directions. What seemed like main characters drop out of the story entirely or fade into the background. Some new characters pop up. Many of them die. Not only does it lack any point of view from the chaos side it loses the larger view from the imperial side so there's not much context for what's going on.

The whole thing just turns into a mess.

Near the end many units evacuate the planet so we spend some time with the crews of a spaceship or two. For the finale we have a group of survivors making a last stand on a completely different planet where they are annihilated by a force of chaos marines.

To give it a happy ending (I guess???) those chaos marines are then annihilated by an imperial relief force in the final chapter.

It's just a mess. That's the best way I can describe it. 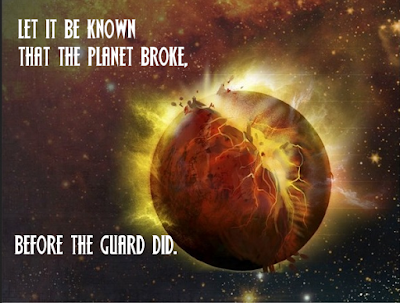 I hate to criticize without some kind of deeper feedback so ... how could it have been better? How could this book have given us more?

To me there are two basic approaches you could take with a topic like this - a big event in the setting that affects a huge number of people:


This book seemed like it was starting out at the personal level, then kind of went high command on us, then went back to the personal level but it spread itself out so much that it had no real impact - on me anyway.

I think there was a narrative issue with the finale too as there is no reason that last fight could not have happened on Cadia itself! It's much weaker to spend multiple chapters fleeing the scene of the event only to have them die by chaos marine somewhere else than it would have been to keep the story focused on Cadia and the losing fight happening there.

I think it's ridiculous to end with an imperial victory of any kind too. This is the story of the Imperium getting punched in the face by Abaddon and the powers of chaos. It should be dark and grim etc. - there are no significant victories for the good guys here according to the other lore we have. Let's not try and sugarcoat it here.

An example of a 40K book that does this better in my opinion is Rynn's World. That story really begins with the Crimson Fists fortress monastery getting blown up during an ork invasion and focuses on a group of surviving marines fighting and sneaking their way across the planet to the main city and then assisting in its defense. Heck, I reviewed it six years ago and yes - there's an example of a much tighter effort on a similar subject.

Even with this one, I won't say "don't get it" but I will say that it may not do the things you'd like it to do.
Posted by Blacksteel at 6:32 PM No comments: