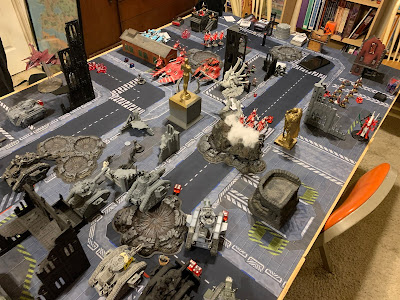 Time to start catching up! We have been playing 9th edition here, pretty much since it came out. I've mentioned it but haven't done any battle reports but I'll think about posting some up in the future. For now I thought I would talk about some of the armies I've tried out so far.

For my first battle I took my ancient Howling Griffons out for their 9th edition of the game.  They've seen action in every version of the game so far - the record continues! I consider them at least semi-retired as I haven't added anything to them in years though I do occasionally contemplate doing a big new primaris update for them. The paint scheme is just a lot more work so that usually pushes me back from that idea. Anyway I took them against Blaster Eldar army and though I lost we had a good time figuring out the new objective system and all of the tweaks. "Edition bleed" is definitely a problem at this point but more games will help.

Then I decided continuity at some level would help so I took the Crimson Fists out for a couple of games. In one of them I took a ridiculous Maximum Dreadnoughts list with a master techmarine with the "keeper of the ancients" trait from Psychic Awakening (these games were all before the 9th ed, marine codex release) and I lost again but it was a lot of fun to run 7 dreadnoughts in one fight. Now of course with the new codex this list would be that much more viable so it will probably show up again soon. 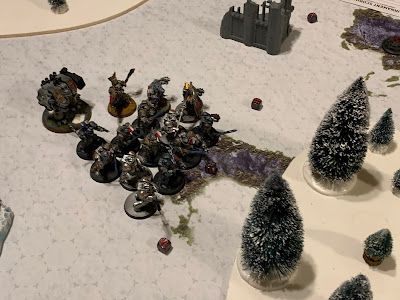 After that I decided to bring the Grey Knights into 9th and took them against Blaster's Eldar yet again and let me tell you ... they are a ridiculously complex army to run. I was struggling for a while to keep track of all of the variables with them. Marines are fairly straightforward - each unit has a purpose but is fairly flexible so you can adapt in-game, there are a few important stratagems, and the chaplain litanies and psychic powers are mostly a bonus you work in where you can.

GKs though ... first off every unit has a weakened Smite + one power, but of course you can only use the normal powers once per turn. So the first part of the trick is allocating powers to your units based on what you think will be useful or important during the game. The second part is in-game knowing when and where to use each one - if I can only Gate of Infinity one unit across the board but I can see three units and situations where it would make sense ... it's easy to feel like you made a mistake as their psychic powers are crucial to their units. Making your Paladin squads +1 to save is a big deal. Jumping a Dreadknight from over there to over here to shoot up something and prep a charge is important. Psychic Awakening made things better in one way as now there are two separate disciplines to spread out in your army but it also made the decision making that much more complex. It was a lot of fun to out-psych the Eldar army for a change, but that didn't save me.

Then there are the stratagems that are also crucial to making the army work, and some of them are significantly influenced by the Tides mechanic introduced in PA ... there is a lot to learn in playing a Grey Knights army effectively. With a typical marine army I would say most of what you need to know is on the datasheet and as I mentioned everything else is situational and a bonus. With these guys I felt like the datasheet was only one part of it. For example:

I think the Grey Knights, more than any other army I have played, seriously benefit from playing them over and over to "see the synergies" and just know what they can do in any given situation. After two games I decided to work  more on building/painting/finishing the army since I had a touch of experience at least to inform my decisions. 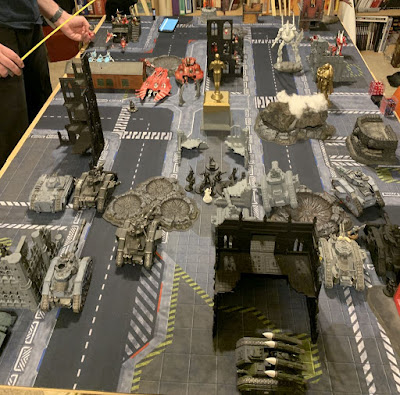 The Hammer of the Emperor

I then decided to try out Imperial guard. I have a lot of tanks and a little infantry and ... well, Blaster's Saim Hann force is damn strong against tanks. Lots of bright lances, a fair number of starcannons, some shining spears, a Crimson Hunter Exarch, and fire dragons in falcons ... it went pretty quickly in both games I played in with the guard. I took 3 Plasma Russes, 3 BC Russes, an Exterminator, a Command Punisher and a Command Demolisher, plus I also had two Manticores ... it didn't matter. I only have a limited number of infantry so I couldn't do a ton of screen and still hold objectives. I had 3 infantry squads and then a Chimera with 3 Ogryn and a priest - again because that's stuff I have - and it was blown open and everyone inside was dead on turn 2. We went big in this one at 3000 points and I did manage to kill his Wraithknight but it took so much firepower to drop it before it started wrecking my tanks that his bikes were all over me before I could do much of anything. I think the guard strats are on the weak side and I am admittedly new to using the army but it felt like I was fighting up hill in both games. 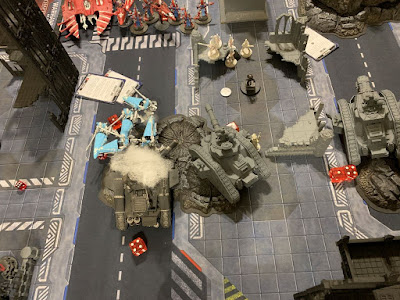 Also ... "Expert crafters". If you've played Eldar in the last year or so you are probably familiar with this choose-your-own-craftworld trait because it's the one EVERYONE takes. One re-roll to hit, one re-roll to wound ... on every unit ... every turn ...

It makes a Crimson Hunter ridiculous as it's only firing 3 shots anyway. Falcon with a pulse laser + bright lance? Same thing. The on bright lance in a backfield Guardian Squad? Yep, he's going to re-roll. Wraithlord's bright lance? Him too. He took a D-cannon battery in some fights and of course they look like all-stars with these kinds of re-rolls. And if you miss or fail to wound with two shots from something important you have the normal CP re-roll available. Doom means at least one unit per turn is going to be a punching bag where everything gets to re-roll wounds too.

I even took custom regiment traits in the second game. One lets lets you repair your tanks each turn and the other let me re-roll the number of shots for all those tanks and artillery. It helped a little but not enough. I'm sure Guard would perform better with repeated play but I would need to add quite a bit to my unit options to really improve them. Bullgryn are a big unit right now and I have none. I only have one Chimera and only 3-4 squads of infantry and suspect at least Chimeras would help keep those guys alive longer. I took one Tempestus squad and some assassins in the second fight and I think they definitely have contributions to make  - figuring them out and getting better at using the orders here and there would certainly help. 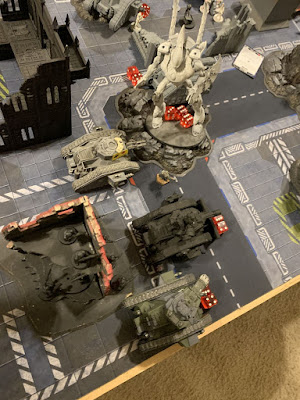 One example of the challenges here: the Vindicare assassin was up high in a ruin and sniped a jetbike warlock - yes! The very next turn he gets charged by the jetbike Autarch and he's done for the fight. He didn't die that first fight phase, but he can't beat an autarch in melee - even with his pistol -  and he can't get away because Bike Autarch is faster. Plus the Shining Spears were busy wiping out the infantry squads in the rest of the ruin so he wasn't going to live long anyway.

So yes I did have a lot of fun shuffling through the Imperial deck these last few months but I did lose a lot while learning a lot and I learned to hate Expert Crafters.