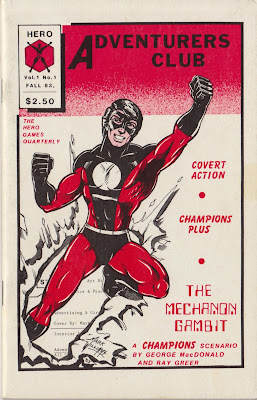 Hero had its own house magazine for many years - Adventurers Club! This is the first issue dated Fall of 1983. It was allegedly a quarterly publication but it came and went at its own pace during the 80's and 90's. Issue 20 was published in 1993 so you can do the math there. It's a 32-page black and white booklet (other than the outside cover).

The content of this inaugural issue is pretty solid.


I had never read this issue until I picked it up earlier this year. I do own quite a few of the later issues as I always found it to be a source of creative use and interpretation of the mechanics and a rich source of the  Champions meta-verse with Foxbat and the rest. I wasn't sure how good this first issue would be but I really liked it. Stuff like this still makes me laugh: 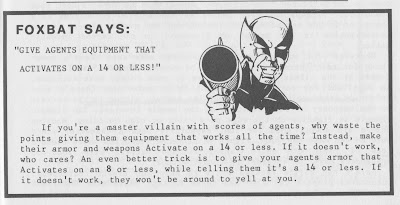 So, Adventurers Club: Issue 1 is good, and I will be walking thru the rest of them as I can work them in.
Posted by Blacksteel at 12:00 PM No comments: 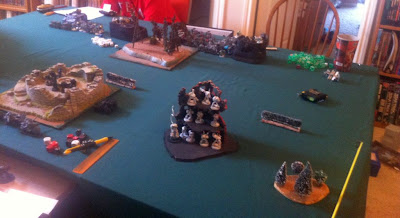 Well the bug has taken a strong hold here. Rules have been read, Codexes have been reviewed, online discussions have been had, glue and paint has been recovered and put to use, and dice have been rolled.

Apprentices Red and Blaster have been fired up and Apprentice Who has been asking about all the fuss so over the weekend we played our first home field game of 40K 6th Edition. I see this as more of a test game so the unlikely pairing of Chaos and Dark Angels took on an equally unlikely pairing of Space Wolves and Orks. Working through the setup rules and all meant that we only got a few turns in but we will be continuing the fight during the week as the boys are insistent that someone has to win.

One thing I have discovered is that I am very rusty - Plague Marines are a lot less tough when you forget "Feel No Pain" - but that the "edition blurring" is not as bad as I had feared. This happens when you have multiple editions of the same game in your head and rules sometimes pop up that no longer apply. That wasn't too bad tis time so there is hope for me yet. Still seems like you can't just shoot freely through other squads though ... maybe it grants a cover save.

Even in a test game you get those memorable moments: 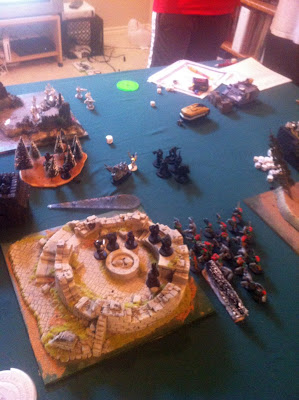 In the center there, right above the flamer template, the last survivor of the Dark Angel bike squad has charged the last survivor of an unfortunate Blood Claw squad. Both were reduced to one man, both passed their morale checks to stay put, then the biker charged and the blood claw (whose companions were all gunned down moments before) counter-charged  in most glorious fashion and engaged in single combat.  - so far the combatants have exchanged blows to no permanent effect! The first one to die gives up a victory point! Of course the survivor is likely to be shot down soon after for another point, but it's very cinematic at the moment and everyone is having a good time.

Anyway this battle will be wrapped up in a few days and some new ones will likely start soon. Army enhancements are on the way as well so it's a very active time for us on this. I've already dropped a 2 vs. 1 challenge on the two older boys for 2 weekends out. They have no idea ... More to come.

Posted by Blacksteel at 12:42 PM No comments: 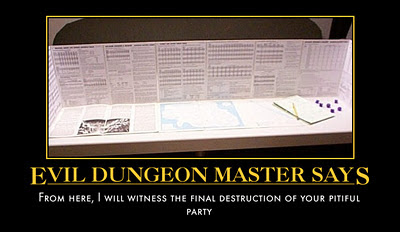