Just saw the announcement of M&M 3rd edition and I have very mixed emotions. It seems like recently the time between editions for many RPG's has decreased significantly. I suspect this is partially due to an "internet magnifier" effect where flaws in a rule system are exposed much more quickly than in the paper mail era and even the BBS era, resulting in a shorter lifespan for printed rule books. D&D 3.5 was a result of this I think. It may have something to do with shorter attention spans too, though I'm not sure.

Return to the Ruins of Adventure - Session 2: Beggars and Baggage 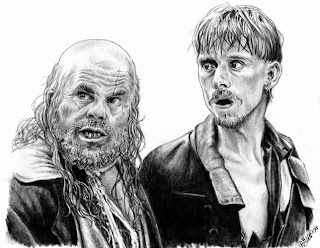 This session saw the addition of a new player who will be running a Human Swordmage. Now as a rule I don't allow new characters to just spawn in with the current bunch, they have to be found - often they are found chained to a wall naked or locked in a cage wearing nothing but rags, but it has to be organic to the game. There's no "You look like a trustworthy fellow" here.
We left the party standing in The Square in the Slums are of Ruined Phlan about to be attacked by a mob of angry beggars. Concerned about the numbers involved, The fighter, Kordan, opens with ... a Streetwise appeal to be cool, they just found the dead beggar already dead? Then Javanni the bard hits them with a Diplomatic barrage that hey, we're all friends here - look we even killed the goblins that attacked your friend. Kordan followed up with more lower-class bonding talk and Javanni continued his epic monologue that ended with the beggar leader crying and handing them his walking stick in friendshiip.
Emergency DM Note: So I have set up a clear combat encounter, my players have had a week to consider tactics, at least one of them knew it was likely all or mostly minions (this was my minion encounter experiment) and the fighter opens with a natural 20 on a Streetwise check! Then the bard, seeing a chance to use his social abilities goes with Diplomacy for a result of 34! I ruled that this meant the party had turned the beggars away from attacking for the moment as they debated amongst themselves what to do. On round 2, the fighter got a 19 streetwise and the bard rang up a 25 diplomacy. Given that I decided that the silver-tongues had turned the beggars into allies, crying, slapping each other on the back and bonding over trying to get by in a world where horrible things can happen to relatively innocent people. The leader gave the bard his staff as a sign of friendship and the beggars wandered off into the ruins.
This was very surprising to me as my planned combat encounter suddenly turned into a skill challenge! Considering that low levels posit 15 as a moderate difficulty and 20 as a difficult, my guys blew this away. The beggars were not evil or fanatical cultists or being driven by a greater will than their own so I decided they weren't really strongly motivated to fight once the mistake was pointed out. I have had some player discussions with opponents before but it's been a long time since I have had PC's attempt to talk enemies out of fighting once mini's were placed on the table and challenges were issued. I was unexpectedly pleased at this turn - it's been quite a while since my players have surprised me like that. Also the staff is a magic item and hopefully the wizard will figure that out soon.
So as the beggars depart, the party notices two of them lagging behind the others, dragging a large sack (see above pic for the two beggars). Watching for a bit, they notice the sack is wiggling. Kordan asks them what's in the sack and they respond "our loot". After pointing out that their loot is moving, they respond "Our dinner." When asked what dinner is they declare "Rats - this is our bag of rats for dinner. Food's hard to come by out here so you have to take it where you can find it." The party is having none of this and opens the bag, discovering a pair of boots, which are still being worn by their owner, the Swordmage (Ta-Daaa! Another successful mid-mission character deployment). He is quickly extricated from the sack as the sack's former owners scurry off into the ruins. Realizing he has no armor or weapons, Dave the Swordmage (yeah, I know, we're working on it) shouts after them "Where's my stuff?" - they shout back "In that building over there."
Dave the Swordmage introduces himself and asks the party if they will help him recover his weapons and belongings that are in that building right over there and they agree to do so.
Entering the ruined building all is quiet until they pass a second set of doors and find themselves in a large-ish room where 5 stirges hang form the ceiling. They awaken and combat is joined. The bard and the fighter are punctured during the fight (as we learn about how grab works in 4E) but no one is severely injured and the things are dispatched in less than a minute. The Swordmage finds his gear in another room and is happy once again. The party pauses for a moment to interrogate their goblin prisoner and he agrees to guide them to Whiteye's lair if they let him go when they get there. The party agrees and heads out.
Reaching the street they see a group of goblins has blocked off part of the street and several of them open fire with crossbows. Althea the wizard opens up with a thunderwave on the line of goblins and blows them away, leaving only the leader and the 2 shooters alive. In what will probably come to be a standard deployment Kordan and Dave the Swordmage (sigh) leap into melee while Javanni provides support and Althea and Mikal fire off magic missiles and eldritch blasts from a distance. The goblins have little chance to use their special tactics and shiftiness as they are separated, marked, cursed, blasted, bloodied and slain in short order. Our heroes pause after the fight to clean up and bind wounds, then turn to their goblin prisoner/guide and order him to lead on.
DM Notes
Session 3 is this Friday so expect a post by Monday, then next week it's back to Necessary Evil.
Picture by Honorat whose other work can be seen here.
Posted by Blacksteel at 11:00 AM No comments:

Return to the Ruins of Adventure - Session 1: New Hopes 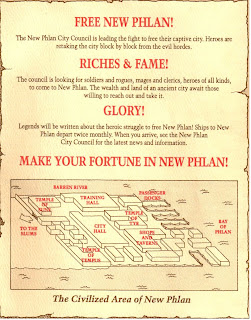 Return to the Ruins of Adventure - Session 0: Prologue 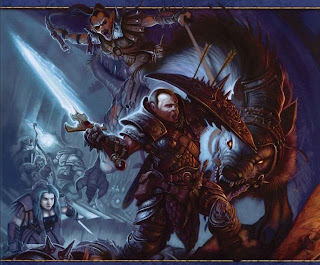