I don't have a background write-up for NightBlade, just pictures. All we know is that he is a ninja-ish character who wields a fancy katana and seems to know a lot about a wide variety of things: 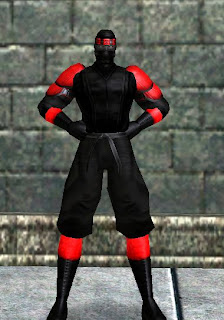 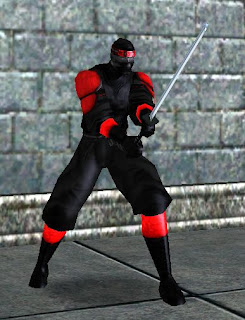 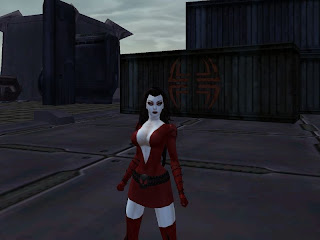 (For a change, here's something not written by me. This is the character background for Nissa in the Necessary Evil campaign, totally written by her player.)

Meredith Gibson grew up in the small town of Astoria under the watchful eye of her father, a small-town Southern Baptist preacher, and her mother, the ideal preacher’s wife with her ultra conservative looks, thoughts, and values. For most of her years, Meredith lived happily in her surroundings of a typical, simple, small-town life. As the only child, Meredith was doted on endlessly by both of her parents. But, when Meredith was just 15, her mother became very ill and died suddenly from a mysterious illness that even the most highly trained specialists couldn’t explain. Meredith would never fully recover from the loss of her sweet mother. The loss sent Meredith on a dark, steep path in the wrong direction on the roadmap of life that her parents had created for her.

Meredith soon tired of what she now considered her dull, claustrophobic, small town life and wished to travel the world. She was able to convince her father that by traveling the world and exploring places she had only read about or seen in movies, she would be able to stop grieving the loss of her mother and start living the life that her parents always wanted her to have. While he was hesitant to let his only child, his precious daughter, stray so far from the safe confines of their small town, Meredith’s dad knew that she would eventually go with or without his blessing.

Using her own savings and the money her father gave to her upon her departure, Meredith was able to travel from town to town frugally as her mother had taught her how to handle her money. Meredith met some fascinating people on her travels and most of them were kind and generous just like the small town folks she had grown up with. One night after dinner and a few drinks with friends, Meredith was walking alone back to her cheap loft apartment on the East coast. It wasn’t the best of neighborhoods but she had taken this same route many times in the past few months she lived there and had never felt any reason to fear for her safety. Before she even realized she wasn’t alone there was suddenly a stranger’s hand over her mouth and another strong hand around her waist. She briefly felt the cold touch of the stranger’s cheek before he sank his teeth into the soft skin of her neck. Meredith couldn’t move, couldn’t scream, she couldn’t break free from the clutches of the stranger that would forever change her life. Her world went completely dark.

She awoke alone in the alley near her loft. She was groggy and unsure of how much time had passed and what happened in the lapse of time. Meredith went to her loft, showered, and crawled into her warm bed for a solid night’s sleep. The changes weren’t immediate but it was only a matter of days before Meredith realized what she had become. She craved the taste of blood although she knew it was wrong, she had to have it to survive. She tried drinking the synthetic blood that was readily available in the vampire underworld and it sometimes helped to get her through the day but it was a far cry from the real thing. Meredith realized she could never return to her small town life and started the process of creating her new identity. There were some positive attributes that came along with the undeniable blood thirst. Meredith became unexplainably strong for her 5’5” slender frame. Her light brown hair had turned a beautiful dark black color that complimented the much lighter complexion of her skin. Her eyes turned darker as well although if she didn’t feed regularly they would turn a chilling color of deep red. Even though she didn’t struggle with the typical aversion to the sunlight, Meredith had a difficult time finding a typical job for a beautiful woman in her early 20’s.

Most recently, Meredith met a fellow vampire, Josie Sibohan, who was looking for a young vampire to serve as her personal assistant, manage her travel schedule and keep track of her expenses. Josie was much older than Meredith but looked almost identical to the striking young woman. Soon, Josie and Meredith, who had changed her name to Nisaven at Josie’s request, had forged a bond much stronger than a simple working relationship as Josie taught Nisaven how to control her urges and use her new found strengths to her advantage. Nisaven was a quick study and Josie relied on her for just about everything. They were together the day of the alien invasion……

Return to the Ruins of Adventure - Session 3: Goblin Hewing 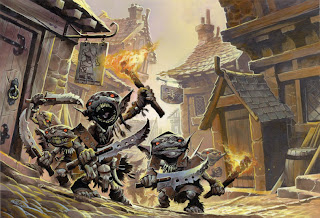 Dusting themselves off after the goblin ambush, the party prods their prisoner into leading them to Whiteye's lair. Along the way he pleads with them to let him go once he shows them the front door. As they venture deeper into the ruins the heroes are on alert for ambushes, but the tied-up goblin still manages to pull one off, leading them into a goblin watchpost just as the party agrees to be lenient with him. "Oh thanks - uh, look out."
Goblin warriors appear from the ruins and charge as one goblin stays back and begins firing off spells. He opens with a cloud that obscures the small humanoids, but this doesn't save them from Althea's Thunderwave which blasts goblins in all directions, killing three. Several of the warriors are made of tougher stuff though and the battle continues for a full 30 seconds. The goblin hexer and the eladrin wizard trade a few spells and Althea ends up blinded. Mikal fires off many eldritch blasts and curses as he and the fighter and the swordmage cut down the remaining gobbos with help from the bard. In the end, Kordan and Dave the Swordmage go after the Hexer directly, with the fighter shield-bashing him senseless and the swordmage lightning luring him out of the rubble and into the street, where despite his attempts to flee he is quickly slain.
Resting for a moment, the bard figures out that the staff given to them by the beggars is magical Mnemoic Staff and hands it over to the wizard. Kordan and Dave brutalize the prisoner a bit to clarify the situation and he agrees to lead them directly to the lair, no more tricks.
Marching through the rubble the group comes to yet another partial ruin. Their goblin prisoner informs them that this is the lair, pointing to a set of steps leading down to a closed door. He waits as if expecting to be released until the party informs him he will be set free when the fight is over. The goblin pleads briefly then, crestfallen, sulks at the back of the party.
Moving down the steps, Kordan and the Swordmage take the lead with Althea, Mikal, and Javanni behind them, weapons ready. They kick open the door and see a large room with several big piles of rags and a small group of goblins playing dice in the middle. Having achieved surprise our heroes take several actions:
-Mikal blasts the nearest goblin
-Javanni shouts orders then viciously mocks one of the goblins, who starts to cry
-Kordan impales a goblin with a thrown javelin
- Althea Thunderwaves the whole mob
-The swordmage steps forward and the floor collapses, dumping him into a pit
Frustrated by the pit the party bogs down for a round or two but their attacks have slain the goblin guards so they have a chance to work around it. The swordmage and then the bard climb out, the warlock and fighter jump over it, and Althea teleports past it. Gobby the prisoner is questioned and threatened rather severely about the pit and his lack of mention that it was there, but he worms his way out of it. Then the swordmage takes a crossbow bolt to the shoulder and battle is rejoined.
The goblin HQ seems to be down to 2 warriors and the chief, Whiteye, who is clearly very angry at this intrusion. Combat goes on for some time with goblins dancing in and out of the rag piles and several party members taking a beating but in the end the chief falls to their efforts as does one of his warrior bodyguards and the other turns to flee. He makes it through several rows of hanging curtains, tapestries, and goblin laundry before opening a secret door and fleeing down an escape tunnel, where he is shot in the back by a magic missile.
Adhering to tradition, the heroes ransack the lair and loot the bodies, pausing briefly before they head back to civilization to claim their reward.
DM Notes:
This Friday it's back to Necessary Evil as we attempt to get on a regular schedule of alternating games each week. I've been running games on Saturdays every other week for the last 9 years so it's really refreshing to have a weekly game again and players who are interested enough to make it work.
Posted by Blacksteel at 11:00 AM No comments:

And another note on new editions - of everything

I was catching up on Warhammer news over the weekend (yes I play the Games Workshop stuff too) and apparently Warhammer 8th edition is due out in July. Great. I've been playing since 2nd edition back in 1984 and I think my playing time peaked with 4th edition (1992-1996) and has been decreasing with every edition since, despite having more armies to play with.
So I might need to temper my RPG edition unhappiness - at least we haven't run through 8 editions of D&D since 1982 like we have with Warhammer.
Posted by Blacksteel at 12:00 PM 2 comments: