My birthday is in February so I took a look around and decided to use some of that birthday money to finally pick up Star Trek Attack Wing. It's about $40 and there's a lot of stuff in the box. 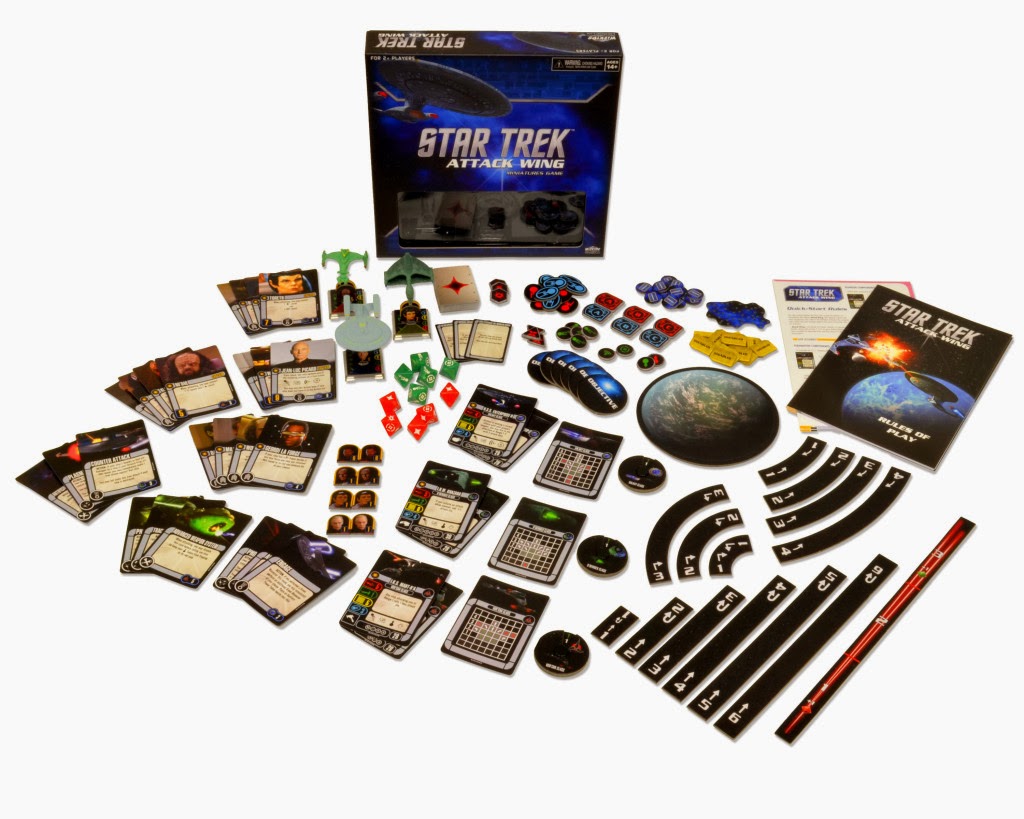 Three ships is enough to play some games and get to know the rules but of course the temptation is to go get more ships, which we have. First things first though: How does it play? Short version: It's X-Wing. If you've played X-Wing you know how to play this game. Ships have square bases all the same size, there are 4 basic stats for each plus special capabilities, movement is done with cardboard templates, and combat uses a range ruler. The rules are available here. Nuances discussed below.

There are a few differences. One, Ships average around 4 attack dice but typically only have 1 defense dice as they are mostly big cruiser types. So when someone shoots there is usually damage. The ships in the box have 3-4 shields and 4-5 hull so they are tougher than X-Wing ships. Firing arcs can also be different among different ship classes.

There are also a lot more things you can do to your ships. Every one of them has a captain, many with special abilities,  and the captain's rating is effectively your imitative for the game. Generic captains have a "1" and have no special tricks while Riker is a "6" and Picard is a "9" and each has their own set of things they can do, as does pretty much any named captain. Beyond this there are


So you can take two similar ships and give them very different setups beyond the basic numbers by using these cards. All of these things, including the ships and captains, are rated in points. There's a lot more to the building element here.

I tried X-Wing last summer and while I like the system overall it just didn't grab me. For whatever reason, STAW does and it's the one I will be expanding, though I may have to give Star Wars another try with a new ship or two. STAW's setup of 3 factions in the starter box is much better than the 2 on 1 arrangement of X-Wing.

Factions: Blaster has taken a shine to his cloaking Romulans, I've taken the Feds, and Red has gotten interested in the Klingons, and we have fought several times over the last few weeks.

Our first battle was in the eye-searing Paisley Nebula: 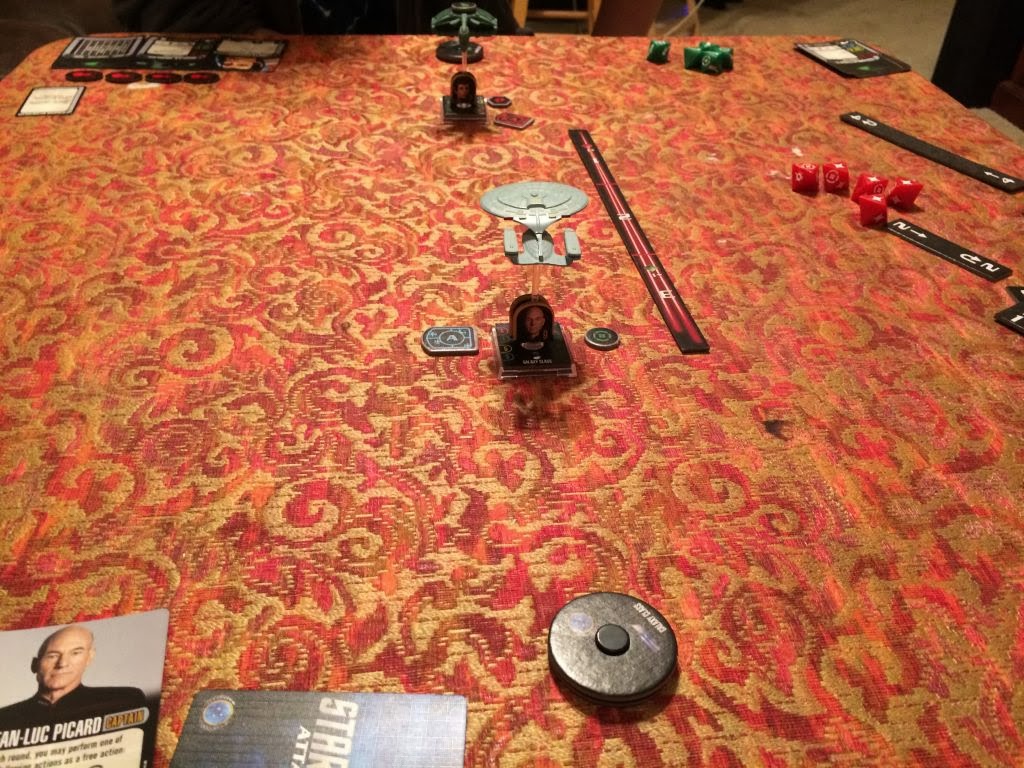 Once again the Romulans are sneaking around and it's up to Picard and the Enterprise to set things straight. We pretty much went straight at each other and Blaster learned the hard way that the cloaking device is not guaranteed immunity.

In STAW cloaking means you get 4 extra defense dice but your shields are inactive - pretty true to canon.The downside though is that there are 2 kinds of hits in the game: regular hits, which just take off shields and hull, and critical hits, which do that plus some other nasty side effect. As long as you have shields then hits are hits and it doesn't matter. Once the shields are gone though, crits start counting and your ship can be limping along on the verge of an explosion if your guns are still operable.


To frame the above roll the star-looking thing on the red dice at the top is a regular hit, the explosion-looking ones with the hole in the middle are crits. He was cloaked, so no shields, and he had a single evasion result on the green defense dice. Regular hits come off first, so he took 4 crits on a  ship with only 5 hull. Needless to say he didn't last long after this. It was a very lucky roll, but it shows how fast it can play and how quickly even a big ship can be wrecked under certain circumstances.

I played again with Red trying out the Klingons. We circled around for a while after I managed to blow off his shields and dent his hull, then I ended up with a Klingon on my tail.


We danced for something like 12 turns total and he blasted me good (two critical hits) near the end but then I managed to pull a full reverse as he charged forward and he was in my firing arc and I was out of his - game over!

We've played several times since these and it's been a lot of fun. It plays fast, the rules are clean, and there is no painting overhead. There's no random or collectible/rarity element to it - ships are packaged individually and are all the same price so far. My next step is to come up with some kind of dedicated playing board for our games at home. It's spurred both of the boys to take a little more interest in Trek to the point we are watching episodes of TOS and TNG each week here now.

If you're looking at getting into one of these games I would say go with whichever universe does more for you (costs are the same and support is extensive for both), and right now for me it's Trek.
Posted by Blacksteel at 12:00 PM 2 comments: 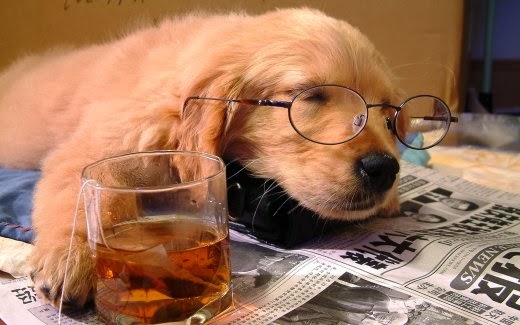 Whew! 28 posts on one subject in 28 days!I am almost caught up - I just ran session 30 on Friday night. I'll get 29 and 30 up this week and then try to stay on top of it from then on. I feel like I accomplished something I've been wanting to do for months now - determination check successful!

Some of those had been posted before so there was a little slack in there, but I reworked those a little in some places, and added some new pics to some of them too.

Now to catch up on some of the other stuff, like the Pathfinder campaign. Current main activities:


Some of us have also been playing a lot of Star Trek Online and watching some of the shows. It's been pretty Trek heavy around here lately for some reason.

What we haven't been doing that I wish we could:

Anyway, there should be more variety this month.
Posted by Blacksteel at 12:00 PM 1 comment: