We had a big finish here for the year for Warhammer 40,000. Apprentice Blaster and I wanted to try out some of our other armies so we decided to play a four game escalation series with 500, 1000, 1500, and 2000 point battles. I wanted to get more practice with the Blood Angels and he wanted to dust off his Space Wolves who have spent most of this year sitting on the shelf watching the Eldar steal the spotlight. So in the last ten days or so I've gotten in 4 games of 40K which is far better than we usually manage. I'll have a more detailed write up on these later but it was good to get in a groove as a lot (though not all) of the head-scratching rules lookup melts away and the thing is just fun. Highlight: Mephiston managed to kill 3 dreadnaughts single handed in two games so there were some epic moments. DO NOT attack him with dreads when his lightsaber is activated!

Blaster and Red also got in a bonus game  which was the traditional "Christmas Battle" where they try out whatever new units they got for Christmas. For the last few years I go find a nicely painted unit for one of their armies and make that a present for them so it a) doesn't add to the painting backlog and b) they can use it right away. Blaster's Eldar (and his new Scorpions) beat Red's Necrons (and his new pair of Annihilation Barges) but they had a good time.

Back to the "Year of the Eldar" - it's been a lot of fun. Focusing on one army has really made a difference. I have still managed to add units and get some painting done on my Chaos Marines (particularly the Iron Warriors) and Blood Angels but the emphasis was on Eldar and most of my efforts went there. I've only used the Wraithknight twice but even in a traditional CAD force a wraith-heavy army painted up in Iyanden colors just looks right.


The Orks, Demons, Crimson Fist marines went thru 2016 with no real changes. I played Orks once and I might have allied in some demons with one of my CSM forces but that's the only action any of these saw.

I did add the Khorne Demonkin book a few days ago so I may look at building out a force for that too - for now based entirely on what I have on hand. I'm not interested right now in building that up too much but I do have some berserkers, bloodletters, and other Khorne units sitting around. Why not give the Bloodthirster an army of his own?

So today and tomorrow are finishing up the Eldar for now and seeing what I can do to finish up some Dark Eldar too. I may do the Iron Warrior bikers on Sunday as they should be fairly quick to paint and don't take a ton of detailing to look good. Then it's deciding on the big push for 2017.
Posted by Blacksteel at 12:00 PM No comments:

Somehow I've never seen this before. Not that it's good. Now my year is complete.
Posted by Blacksteel at 12:00 PM No comments: 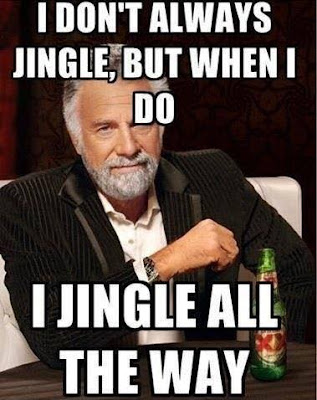 Been busy for the last week with time off and family and holidays but I will be back online next week to wrap up the year!
Posted by Blacksteel at 11:56 AM 1 comment: