Using some "preview" copies of the rules we managed to put together a 1500 point game of 8th edition 40K last night. I took Eldar and Blaster took his Space Wolves in the basic mission "Only War".

I took a Battlion detachment:


Yes, Prince Yriel actually took the field! One of the worst characters in the game for several editions now! What can I say? I was feeling optimistic.

The mission is basically set up 4 objectives, they're worth 2 VP each at the end of the game (like older editions) and if you can kill the enemy warlord he's worth 1d3 VPs too.

Our narrative here was that a farseer had come to some remote world to let Yriel know it was time to come home and lead the fight. He had been tangling with some imperial forces and the Space Wolves led by Wolf Priest Odysseus had finally been dispatched to put an end to his raids. The prince wanted to tweak the humans by taking out their commander while the priest wanted to prove himself as a commander by taking out the annoying eldar legend. 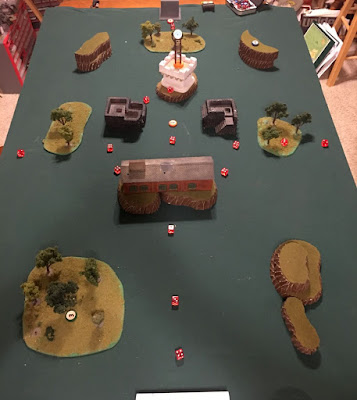 The deployment map we used goes back to the old table quarters format but it also has a "hole in the middle" with a 9" radius. So not every map goes with the old rule of 24" of separation. I started in the bottom right corner and Blaster started in the top left. 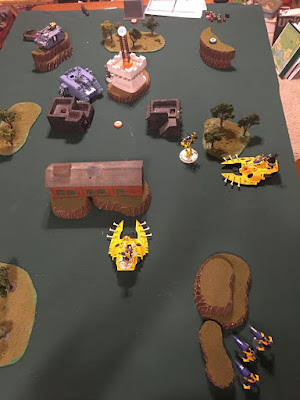 Deployment is now alternating - I place a unit then you place a unit. Other games do this and it is much much better than sitting for 30 minutes while your opponent sets up. Also, whoever finishes first gets first turn so there's an incentive to take fewer units there.

The dire avengers and the HQ's started inside the serpents. The scorpions and scouts started in reserve.

For the Wolves the priest and the Blood Claws started in the land raider while the two terminator units started in reserve. The razorback was strictly a gun platform for this fight.

I ended up with first turn. 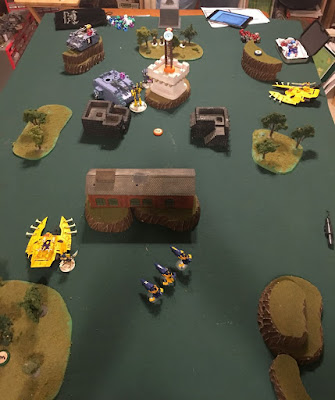 I admit I had no real plan here. It's been a long time since we played the old "get the objectives at the end of the game" style missions as I burned out on those in 5th and 6th edition and played only maelstrom missions in 7th. Also not knowing how the game is really going to work makes it tough to have a detailed plan as I have no solid expectations of how these units will interact. I had tons of mobility and some decent firepower and figured that would have to see me through. I did some damage to the razorback and the dreadnought (shot in the back by snipers!) and moved around a little bit.

The most notable thing on turn 1 was that I ran the wraithlord right up the middle, unloaded all of my guns into the land raider, then charged him, made it, and pounded on him with my "wraithbone fists". The shooting did some damage but the melee did not and the overwatch from the approximately 1000 guns on the thing took a couple of wounds off of me!

Note 1: For the Eldar, the Starcannon is pretty nasty now. It's still 36" range at Strength 6 with 2 shots but it's AP -3 which means marines and most vehicles only get a 6+ save and it does a flat 3 wounds! Having two of them on the wraithlord and on one of the serpents made them a serious threat to everything on the board. I'll be using more of them this edition.

Note 2: The interaction of Strength versus Toughness became very clear here. The Wraithlord's fists are now strength 7. The land raider is toughness 8, so I was fighting uphill needing a 5+ to wound. The Wraithlord has the option to take a sword but since my old metal guy doesn't have one I didn't take it. For 10 points the "ghostglaive" bumps him up to strength 9, meaning I would have been wounding on 3's. It also bumps him up to a -4 AP from a -3, and bumps the damage from a flat 3 to 1d6. I'd say it's worth it, so I may modify the old dread to have something swordlike in one hand. 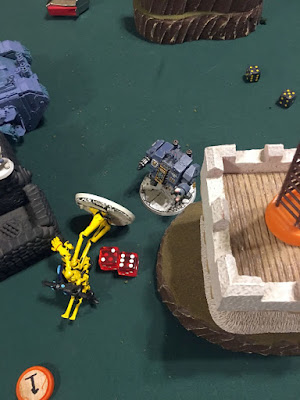 On the Wolves first turn, well, the land raider backed off from being stuck in melee with the Wraithlord and the Dreadnought tagged in to the fight. As you can see, it didn't last long. Dreadnought power fists still double their strength and the cap isn't 10 anymore, so he was taking 4 swings at strength 12 against my toughness 7. He put the wraithlord down hard. With two fairly evenly matched combatants swinging first matters a lot. 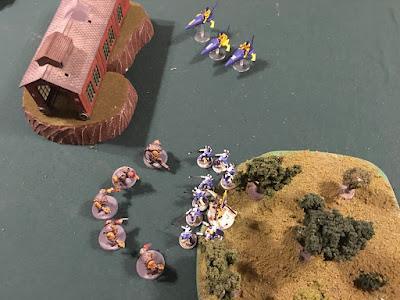 Also, both terminator squads came down and beat on my two wave serpents. That's two 9 inch charges after a deep strike by the way. The farseer's ride stayed intact but Yriel's serpent was wrecked, killing 2 dire avengers, and the rest spilled out. My original thinking was to back into the woods, slowing down his charges (-2" for charging through woods) while shooting him and bringing in the Striking Scorpions to engage them directly. 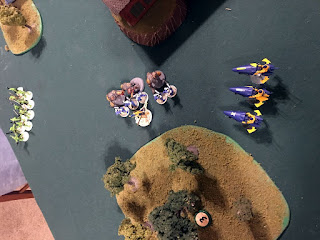 Theeeeen I said, hey! Why not charge them with both? Yriel's a vicious melee fighter so why not use him too? So I tried to charge them and failed because of the minus from the woods! In addition overwatch killed one of my avengers. I used command points to re-roll a die and made it, but that meant my scorpions would have to make a long charge on their own with nor chance of a re-roll and of course they failed it. At this point it really looks like I have no idea what I am doing. 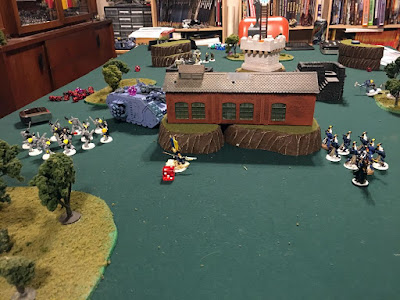 Over the next few turns other stuff does happen  - the bikes fly over the hill and kill the dreadnought but are then gunned down by the land raider as the long fangs frag the rangers off of the board - but this is really the decisive part of the fight.

Yriel and the avengers wipe out the shooty terminators  - at the cost of all of the avengers. See above.

The scorpions, betrayed by the dice, get charged by Blaster's favorite combo of Blood Claws and a Wold Priest charging out of a Land Raider Crusader and it is a really nasty piece of work in this edition. The claws' weapon skill went up to 3+ (guns are still a 4+), they get an extra attack on the charge (which is not a normal thing anymore) and then the priest lets wolf units within 6" re-roll failed hit rolls in the fight phase. So yes - they gunned down 5 of the 10 scorpions, charged them, and then wiped them out in one round. 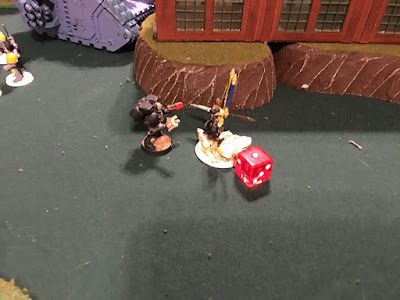 The Blood Claws fail their next charge but Odysseus charges in solo, determined to bring down Yriel, now wounded and alone. There is a ferocious fight dominated by life-ending weapon strikes followed by miraculous invulnerable saves! 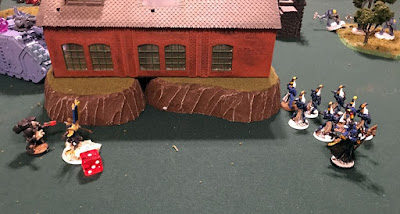 All this happens as the Farseer and his Dire Avenger bodyguard look on in horror. 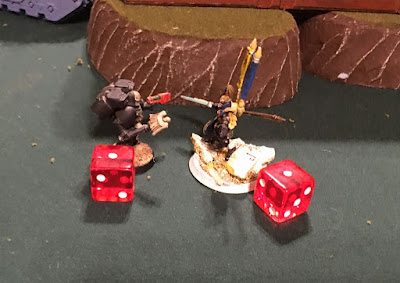 Quickly, Yriel begins to take the measure of his foe... 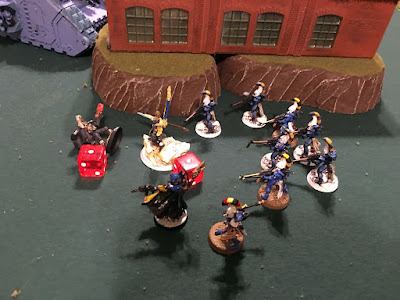 Finally, using the Eye of Wrath he surprises the Wolf Chaplain and brings him down! It's a one-use weapon with a 3" range and I had hoped to never need to use it but it won us this fight! The Spear of Twilight and his natural skill means that in melee he's hitting on 2's, re-rolling 1's, then wounding on 2's, with a -2 to saves. He had a Warlord trait that gave him +1 attack on the charge so he was swinging 5 times with that thing in the first round. 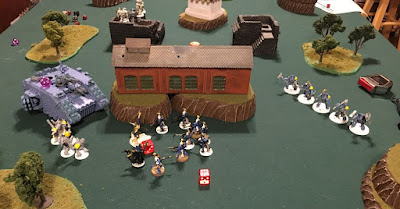 Of course, a personal victory is not always the end of the larger fight. 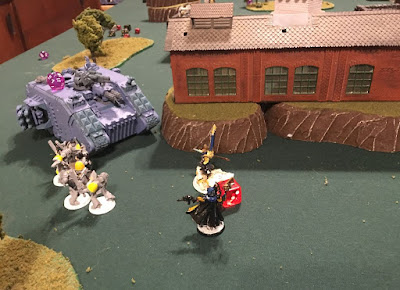 Dakka-dakka-dakka from the wolves and suddenly we're down to a party of two. 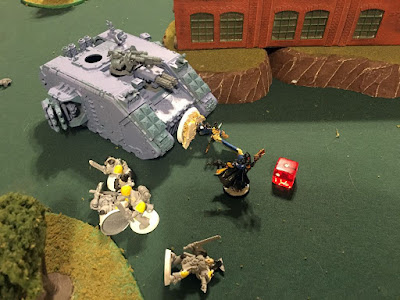 ...and then the land raider charges Prince Yriel, taking him down. It's a far less poetic end then "defeated in honorable one on one combat" but "run over by a giant space marine tank" is still an end.

Clearly, Craftworld Iyanden will need to send a rescue party to free him from captivity!

There's a ton more for us to learn so I'm going to leave it right there for now. I will definitely have more to post on this over the coming months!
Posted by Blacksteel at 6:21 PM 4 comments: