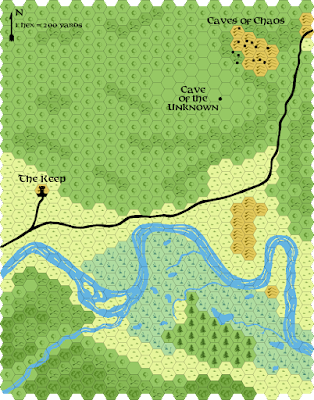 Over the weekend - in a break from the 40K mania - I ran my first game of 5th edition D&D. I've played it - once - but I have not run it and after talking to some of my group I've been feeling like I should give it another chance. We decided to keep it simple: first level, basic dungeon crawl type situation.

Now this all came about in less than a week so I did not go off and hand-craft something. I went full retro: Keep on the Borderlands. This is the first adventure I ever ran for other people, 30-something years ago, and it's been a few years since I last touched it. We tried it during the Next playtest and the Apprentices gave up on it after some lethal encounters and went back to 4E & Pathfinder. I hoped this time would be different.

I was serious about the retro - we used old-school character sheets, rolled for ability scores instead of using points, and made them by hand - no Hero Lab or other tool here. Pencils, paper, and dice only! 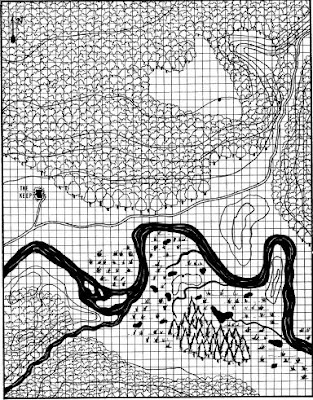 Character generation took a while even with the simpler system. First, only one player has really spent time playing 5th (with another group) so it was all new. Second everyone made two characters - with 3 players and a new system I figured it would give us a better feel for the game once we got going. The good news is that it wasn't mechanical complexity, nor was it resource scarcity as we had 3 copies of the PHB at the table, plus the Basic PDFs on everyone's phones. It was trying to decide what cool option they wanted to try, which is one of the best reasons for taking extra time to create characters.

We ended up with 2 fighters, a barbarian, a cleric, a wizard, and a rogue. All human except for one dragonborn fighter and the half-orc barbarian.

We ended up running through a chunk of the goblin and hobgoblin caves which is kind of funny as that's where the Apprentices went first a few years back when they played it. No one died this time! The game played quick enough that I am optimistic we could accomplish quite a bit once we have some more experience. I temper that a bit though as 3E, 4E, and Pathfinder all play fast at low levels too. Time will tell. Everyone seemed pretty happy with it and I expect we will be continuing our explorations in the near future.

I'll put together some notes on what I'm doing later. I'm pretty much running it straight up as written so the encounters care nothing for CR or "balance". I may moderate that a bit later but I want to see how it works as-is for now. 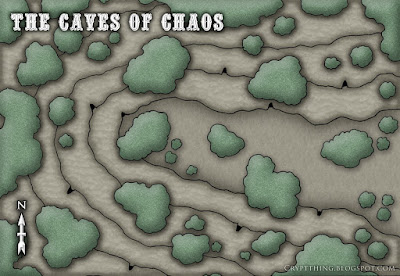 Setting note: I agonized over the setting for a day or two and finally settled on Greyhawk. I figured that would complete the "old school" vibe I wanted and it's not like I don't have the material. The last time we played in Greyhawk was back in 3rd edition with Return to the Temple of Elemental Evil so it's had time to settle. I have high hopes that if this takes off we might end up with several parties running around doing the classic AD&D adventures and if so this is where I want to put them. I've placed several other low-level D&D and AD&D adventures in the area near the keep so I have a lot of places the PC's could go while still basing out of the keep. That should make it easier to mix and match characters regardless of who can play.


One of the reasons I took this approach is that there are some interesting coincidences happening right now.  It's the 40th anniversary of Star Wars. This year is the 30th anniversary of the original publication of Warhammer 40,000.  I am re-watching Star Trek the Next Generation with Apprentice Blaster, 30 years after it first aired. That's also the year I graduated high school, so there's another anniversary,  and he graduates this coming weekend.

All of the stuff that goes along with a kid finishing high school now had me thinking about my own end of high school & beginning of college that year and mixed in with that are some of those other hobby things. In 1987 we were playing AD&D like veteran pros along with a bunch of other RPG's and besides  ASL, Battletech, and Star Fleet Battles we were just getting started with this awesome new Warhammer spin-off with space marines and orks with guns!


With all of the excitement going on with the new 40K that releases in a few weeks I've spent a fair amount of time looking at a lot of my old stuff from rulebooks to campaign notes to armies. With a growing interest in 5th edition I've been looking through that old stuff and considering what I have not done.There are a lot of old adventures that I've never run for my regular players, core touchstones for older players like me (and like some of them), stuff I have probably been through 5 or 10 or 20 times and I feel like that's a miss on my part. Instead of running a bunch of newer stuff why not run the old stuff in a modern system that is retro-friendly?

Deadlands and M&M are still part of the plan but there may be room for a 3rd game on a "whenever we can get at least 2-3 people together" type schedule and this is it.