Establishing a presence on the planet with the help of several brother marine chapters, the Crimson Fists begin their campaign of reclamation. In particular, one small band of Space Wolves helps hold the line against the green tide ...


Around 30 Orks, a couple of Kans, and some big indirect fire guns- I should be able to make something of that!

Blaster's forces consisted of a Grey Hunter squad, a small Blood Claw squad led by his wolflord, and some Long Fangs.

We played Scenario 2 - Purge the Alien. My Warlord trait was Master of the Vanguard, giving my Warboss and his boys an extra roll when running. I set up the two mobs of boyz and the kans on the center & right, aiming to take out his fangs and hunters. The lobbas were on the left in some cover. He set up the hunters in some woods on his left, the long fangs in a ruin in the center, then the blood claws on his right. Our backstory was that the Space Wolves were out on patrol and had tracked a party of Orks into a wooded area where things got hot: 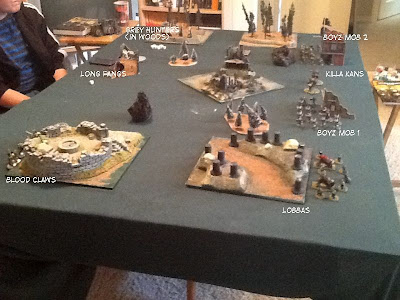 Ork Turn 1 - The boyz run forward, the kans shoot and miss, the lobbas shoot and scatter all over, doing nothing! 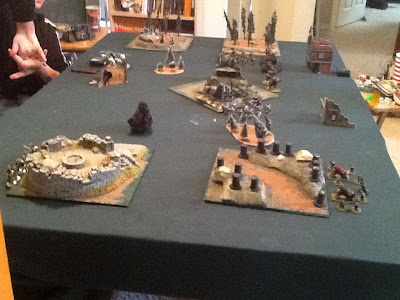 Wolf Turn 2 - Grey hunters& fangs wipe out a boyz mob and put a wound on the warboss! 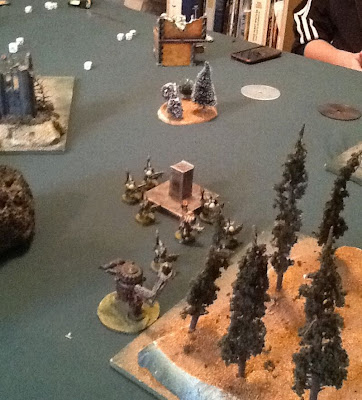 Ork Turn 3 - Boyz charge the long fangs, wipe them out, one kan charges the hunters then explodes when blown apart by krak grenades 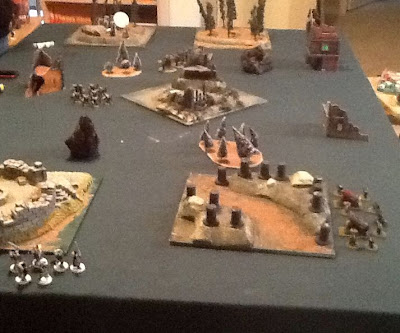 Wolf Turn 4 - Hunters shoot at back of the remaining kan, lay one hull point on it, Blood Claws move up 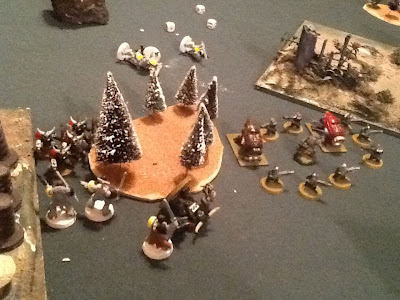 Wolf Turn 5 - The last Kan dies to bolters and plasma fire, Claws and Lord charge boyz and Boss, take them down in Assault 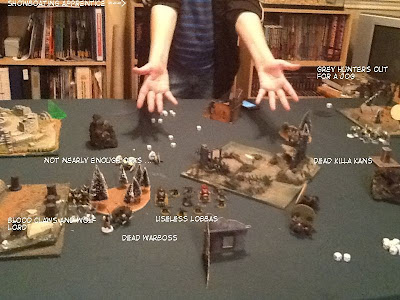 So the Wolves win 6 VP's to 1 - not a great showing by me. Attempting to charge a unit of Grey Hunters in cover with only half of my forces was a mistake, and taking lobbas in a small battle like this was probably a mistake too. I'm thinking buggies or more boyz instead of lobbas and kans would have been better choices. I can tell I have a learning curve to climb going back to small-point ork forces. Apprentice Blaster was happy with the way it went for him, as he should have been.

Next time we're bumping it up to 650 and we will play another one or two battles.
Posted by Blacksteel at 3:32 PM 1 comment:

The Apprentices vs. Stonehell - Session 1 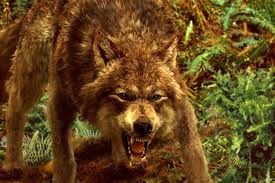 I told the Apprentices what I was thinking - that it would be nice to have another fast-D&D option - and they agreed. Apprentice Who was sick so he sat out this round but Red and Blaster were ready to go.

The first part of the experience was making characters. I told them 3d6 in order. There were frowny faces but no real griping other than "you know that means we're going to suck, right?". I tried to gently push them forward with the whole "part of the fun is overcoming the odds with a less than perfect character" D&D dad speech but it's clearly not a huge plus in their opinion. I did give them the chance to swap two attributes around, and that made them pretty happy - briefly.

We are playing advanced Labyrinth Lord so we have all the races and classes from AD&D and Blaster was shocked by the stat requirements for a Ranger. Subsequently Red was shocked at the Paladin - "Who has a 17 Charisma?" was the comment I believe.

Apprentice Blaster was subsequently shocked to find out that Elves cannot be Rangers! His favorite race can't be his favorite class! SMACK! Welcome to the good old days son! Actually I used to think that was stupid too so I eased up here and pretty much let races access to class = race access to subclass as well. We'll figure out the level limits and stuff when it matters.

Anyway we ended up with an Elf Ranger (surprise surprise) and a Human Cleric for Apprentice Blaster, then a Half-Orc Fighter and a Halfling Assassin for Apprentice Red. They have names but we will not concern ourselves with those names until they reach 2nd level.

This was all arranged very much on the fly so as they finished up character creation I handwaved a lot of travel time and said they headed straight for Stonehell when they left the great city of Dragonpoprt, bypassing the local town  in order to get right to the dungeon.

Stonehell is located in a box canyon which is walled off by a 20' stone wall, kind of like Helm's Deep without the fortress part. It's partially collapsed but the central section with the gatehouse is still intact. The canyon has some cave openings ala Caves of Chaos, plus there are some terrain features inside the canyon too - in short there are a lot of places to check out before entering the dungeon proper. They stopped to read the graffiti on the outside of the wall (treasure promises, warnings, etc.) and then went inside.

First stop was the first entrance on the left - empty, empty with big stone thing in the middle of the floor, then NOT EMPTY! Yeah, skeletons! A few minutes later and the skeletons are smashed to bits around the room and no one died!

Encouraged by this they decided to check out a small wooded area and they manage to surprise a group of brigands waiting in ambush! A very one-sided fight breaks out and the brigands go down faster than the skeletons did, though they manage to get in a few licks in on the party.

Backtracking a bit they decide to enter a cave when the ranger notices some bear tracks and they hear a low growl form within -  a bear growl. Realizing this is likely the lair of the local mascot and good luck charm they decide to back off and check out some other options.

Heading up a nearby trail the neophyte heroes come upon a new cave with non-mascot wildlife - wolf tracks! They charge in and the wolves attack! In a flurry of vicious blows a wolf is wounded but the cleric goes down in the first round. Shocked back into reality a hard fight begins and goes on for 8 whole rounds, taking out all 4 wolves and only claiming the fighter's life along the way as an additional cost. The now somewhat less cocky party gathers up their things and heads to the nearest town, to bury the half-orc, help the cleric recover, and recruit some help.

DM Notes: Hey, I tried to get them to check out the hireling rules but they were not interested. All went well and they used appropriate caution until the wolf episode and well, hopefully they remember that.
It was a promising run and they were amazed that we got that much exploring and fighting done in the time we were actually playing. That's a good way to start and next time we should accomplish even more as we won't have quite so much character building to do.
Posted by Blacksteel at 12:00 PM No comments:

I made some posts about d6 Star Wars back in 2011 as I was trying to get a game going with the Apprentices and was appalled at the amount of mechanical nonsense getting in the way of my game. Where was the fast and furious dice-tossing I remember? Bunches of weird skills, tons more charts than I remembered, a load of very specialized skills and special-case rules - it just was not the same as what I recalled. I posted stuff (you can find them under Star Wars and under Rules Mongery over there on the right) that I liked but I think I overdid it a little as I struggled to turn Second Edition Revised and Expanded into the game I wanted. It is a very pretty book but don't fall for the trap! It's a ton of work to undo all of that stuff! Instead I found a simpler path and went retro.

I recently re-acquired a copy of the first edition rules and this is the game I remember. We didn't play it a lot but it left a very distinct impression and the only game that's really come close to that particular feeling is Savage Worlds. Re-reading this version reminded me why.

A shorter, saner skill list. Fewer charts and tables. Still-clean rules for most of the situations that will come up in a typical RPG - no, we don't need 14 (literally!) different mechanical repair skills, from armor to droids to walkers to star cruisers! Somehow this version survives with only 4! I think this is a fair example of the bloat I'm seeing as the game expanded and the designers tried to make it into a system that could accommodate every possible kind of campaign. Somewhere the focus on making it run like the movies was lost. Maybe the EU had something to do with it, trying to shoehorn in everything a wide group of authors could think of was bound to stress the mechanics at some point. It doesn't need to be everything to everybody - put the core in the box/book and let the DM's tweak it to fit their game!

I also think that some desire to run long-term ongoing campaigns led to the over-diversifying of the skill system to ensure there were niches where everyone could shine. I get this to a point but again, 14 mechanical repair skills - that means I'm not counting medic type skills here - tell me that this went way too far. Do you really need to be the guy that has Walker Repair but not Hover Repair and not Repulsorlift Repair, or Droid Repair? The same kind of thing happened with a lot of the piloting skills and the combat skills as well. How big is your party anyway? No wonder the militaries all used clones or robots - I've got a droid specialist, then a space fighter specialist, then a space transport specialist, then a starship specialist - it's crazy!

The D20 version went the other direction - it started off somewhat clunky and honed things down to far-more-star-warsian-than-many-believe-a-d20-game-can-be in it's final Saga edition. D6 started off awesome and then lost its way.

So if I was starting up a speedy Star Wars game today and wanted to go d6 what would I do? It's pretty simple, I would go with 1E. I'm sure there are some balance issues in there, and I really like the wild die which was added in a "rules update" that came out after this book, so I'm not saying it's perfect, but I think it's a much cleaner start than 2ER&E. I'd rather go back to the beginning and solve the problems as they come up than start with a bunch of solutions to problems I don't know I would ever see.
Posted by Blacksteel at 12:00 PM 2 comments:

Getting back on track the right way 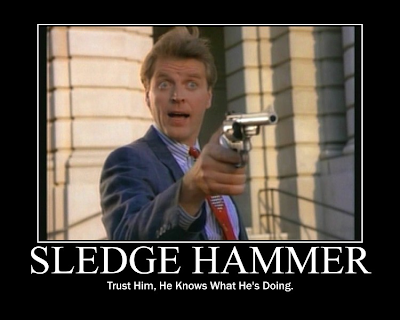