Reasons to be Optimistic About 8th Edition 40K: Terminators! 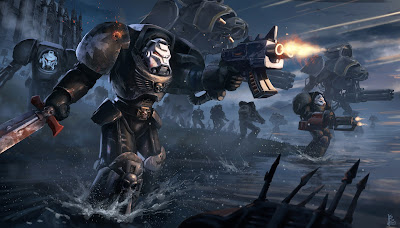 I'm still thinking through the potential impacts of the new edition of Warhammer 40,000. One thing that is becoming evident is that there is a lot of 2nd edition showing in what we already know with armor save modifiers for individual weapons. If we are looking at that kind of thing then we might be looking at a serious return to top-unit status for one that's been suffering the past few editions: Space MarineTerminators.

Why? Because in 2E 40K a tactical marine had a 3+ save on a d6, and so went to a 4+ to bolter fire with it's -1 to saves. A terminator though had a 3+ on a 2d6 roll. not two individual d6's, but the traditional two six-siders added together. Yes, they were that tough. Even against the big guns they still got a save. it might be a 10+ on 2d6 but they still had one! Terminators were expensive but worth it, most marine armies that I saw hitting the tabletop included at least one squad, and it was probably their highest level of power in any edition of the game.

Now I like terminators - a lot. So I am hoping that this does happen and that they do return to being the heavy-hitters of marine forces everywhere. Not just the thunder hammer & storm shield guys you still see sometimes today, but the guns & power fists squads too. It will be a glorious edition for them if this pans out. Finally!
Posted by Blacksteel at 11:35 PM 1 comment: