It's been a busy week here as Apprentice Red graduates tomorrow. Next week maybe things will get back towards normal ... whatever our new normal turns out to be with one out of high school. 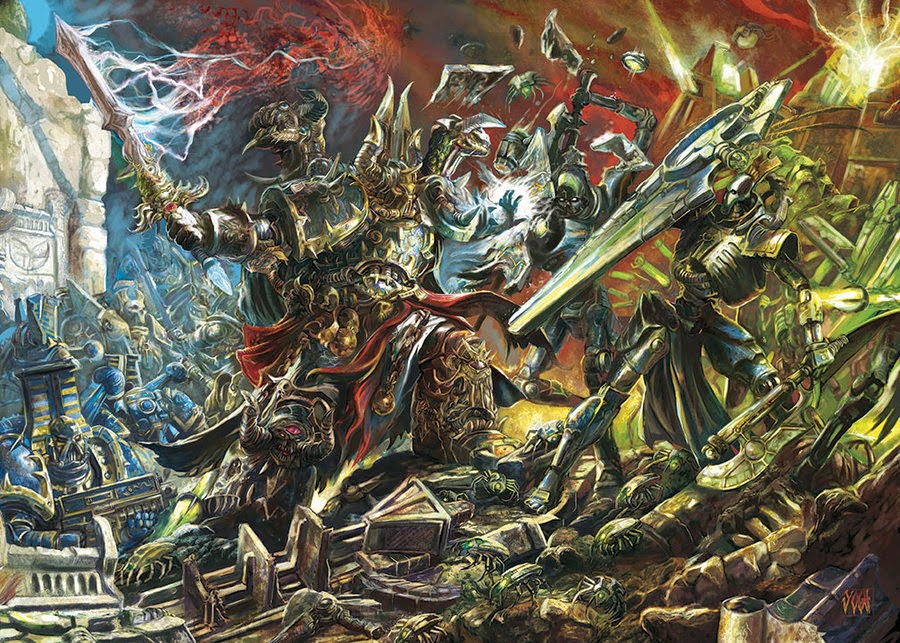 Since we were off on Monday for Memorial Day, we decided to give the new edition of 40K a try. We went for 2000 points since we had some time. With the new flexibility on structuring an army we decided to mix things up from our usual single force-org single army style. He took Necrons with a side order of Orks, I took Chaos Marines with a side order of Bloodthirster Chaos Daemons.

I ended up with slightly over 2000 points, but so did Red so we were good.

My plan was that the Daemon Prince, 'thirster, bloodletters, and possessed all charge across the table. The plague marines would grab nearby objectives. The havocs would park in a ruin and spend the whole game shooting as would the defiler. The cultists would start in reserve to let them jump on any rear objectives I unexpectedly lost and to keep them alive a little longer.

His army was his ridiculous Necron Horde, this time with 4 units of 20 warriors, each with a lord and a res orb, plus a monolith, led by that pair of characters where one id the teleporting bodyguard, and aided by one unit of 20-something ork boyz led by a warboss. All 100+ infantry start on the table, his monolith starts in reserve, waiting to deep strike in and teleport one of those hordes through its gate. 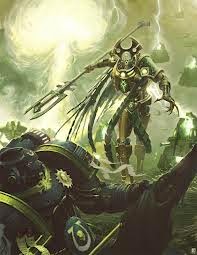 We wanted to do one of the new missions using the cards so we rolled on that table and got the "start-with-one-card-and-get-a-new-one-for-each-objective-you-control-at-the-start-of-your-turn" mission which I will use because as I write this Apprentice Blaster has my copy of the rulebook. It defaults to the usual long side vs. long side deployment zones so it was pretty conventional otherwise. Officially now you're supposed to set up the table and place the objectives before rolling for the mission and choosing sides and we mostly did that.

Warlord traits: they are much better in the book now, and if you're using a FOC your warlord gets to reroll his result. I ended up with all friendly units withing 12" can reroll 1's in the shooting phase which was pretty nice. Red ended up with a unit of his choice becoming "tank hunters".


On top of this I was setting up first so Red got to twiddle his thumbs for quite a while. I set up, he set up, then it was my turn. 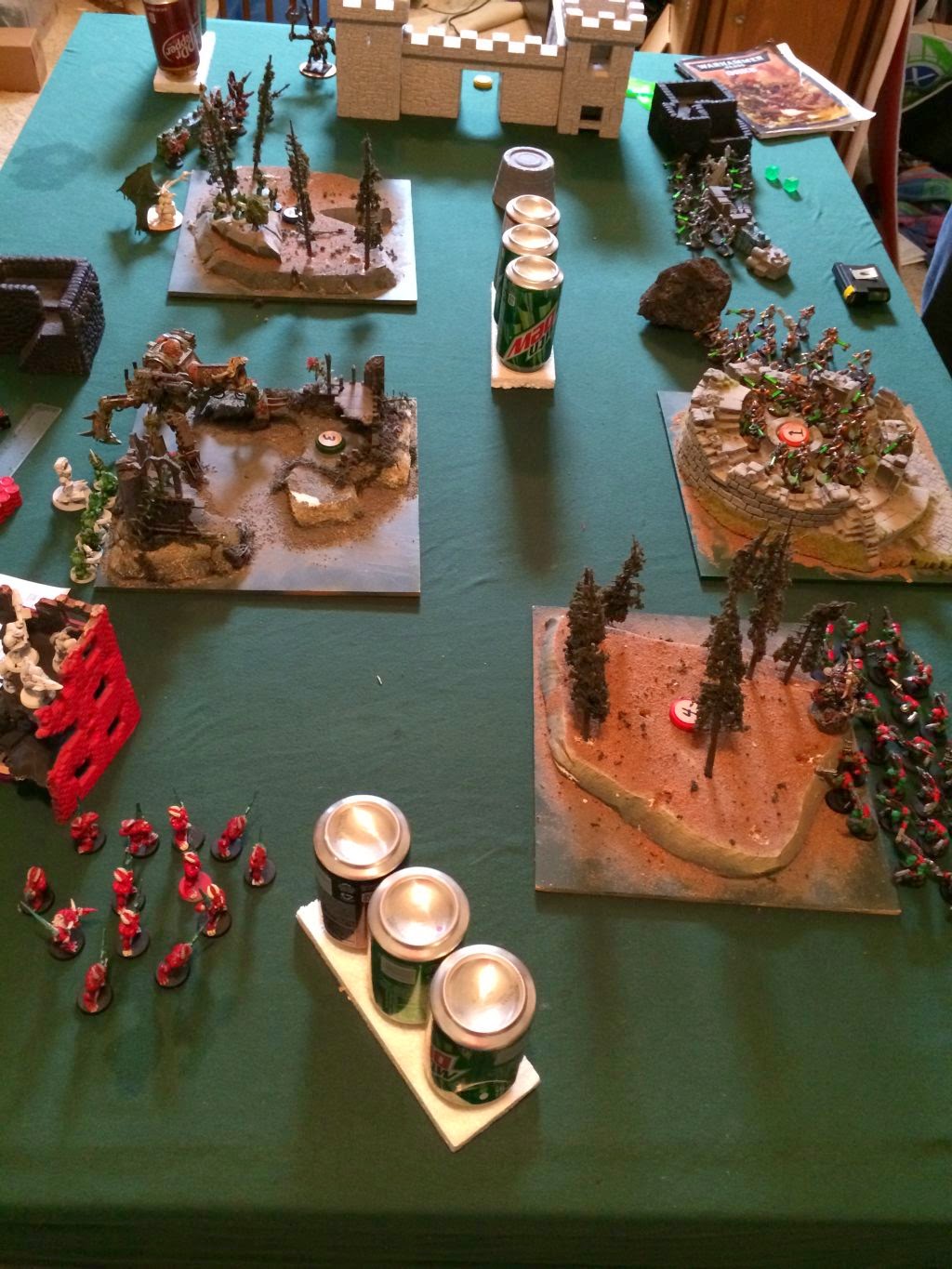 Turn 1 Chaos Movement
Starting at the bottom the bloodletters ran out towards the Orks (though I was hoping they could get past them), the Havocs parked in the red ruin (which was also the home of an objective), the plague marines and the chaos lord moved into the central ruins (another objective) accompanied by the defiler. The other unit of plague marines moved into the woods (another objective) backed up by the daemon prince. The possessed and the thirster moved up near the castle at the top.

(On his side, Necron mob #4 is lined up at the back of the board behind the orks, out of site.)

Turn 1 Chaos Shooting
The havocs open up on the orks (hey, they don't get back up and they're the only assault threat he has!) and blow away nearly half of the densely-packed greenskins. Awesome!


The defiler drops a battlecannon round to finish them off, it deviates, and tags one necron, who gets back up. Not so awesome! Everything else is out of range.

End of Turn - I get a VP for having Objective X.

The orks run up, predictably enough, but the woods are slowing them down. Then the bodyguard leader-guy teleports his tank-hunter squad up in front of the ruins. Gulp!

Turn 1 Necron Shooting
He fires a bunch of shots at the big walker, and with the super-special necron rule + his warlord trait manages 4 glances. Defiler has 4 hull points. If I make even one daemon save I can blow them off of the board next turn ...

End of Turn - Red gets a VP for having an objective and another one for First Blood, so he's up 2-1

The plague marines plant themselves on the two center objectives, the havocs stay put on a third, everyone else moves up to get ready for an assault.

Turn 2 Chaos Psyker
The daemon prince pulls off a summoning and drops ten plaguebearers in near his HQ warrior mob. This new power is pretty cool. 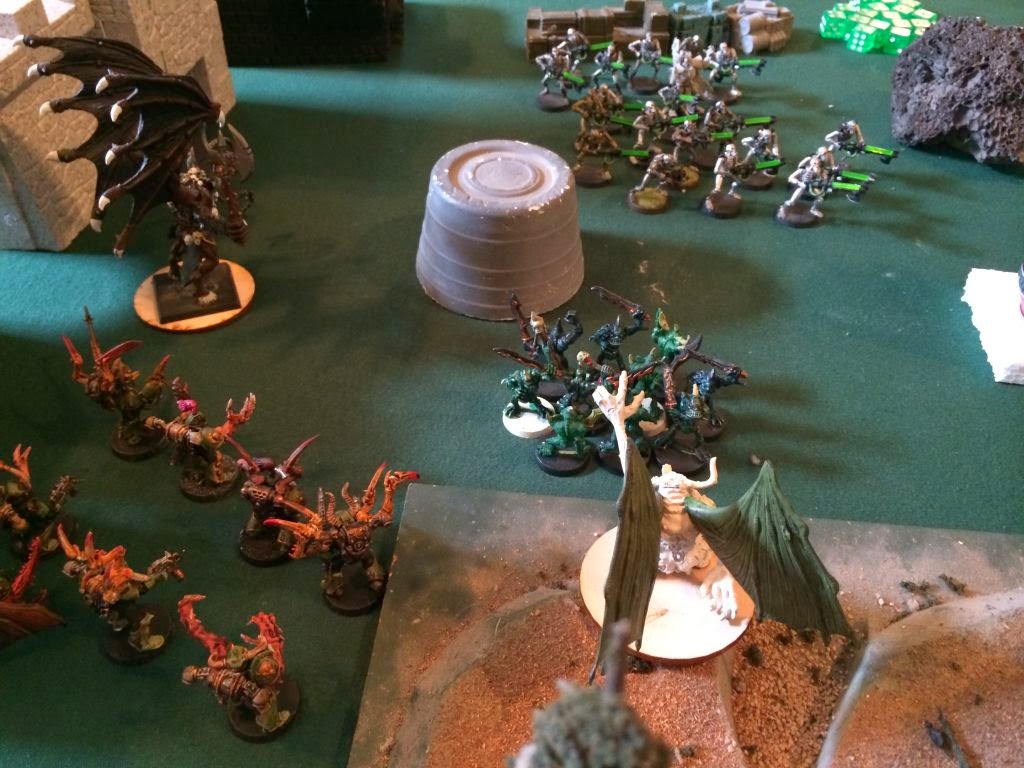 Turn 2 Chaos Shooting
The havocs blow the orks into single digits but the warboss is still around and they pass their leadership test. The plague marines pop off a few shots but nothing significant comes of it.

The Bloodthirster is just about close enough ... what the heck - charging! The robots open up with 33 shots and do ABSOLUTELY NOTHING! They hit, but need sixes to wound the beast and then I have a 3+ armor save. After this moment of glory I do fail the charge distance, but still ... it was fun.

The bloodletters charge into the tank hunter necron mob and cut down a bunch of them. The bodyguard HQ kills the bloodletter champion in a challenge but the overwhelming tide of daemonic violence rampages through them and wipes them out. There are no pictures of this, it was too ugly. Red hates the Sweeping Advance rule, especially when he plays Necrons.

End of Turn - I get two VP's from cards as I hold two objectives mentioned on them. I'm now up 3-2.

Turn 2 Necron Movement
He had thought I was going to charge his Orks. now he moves the greenskins into position so he can charge the daemons.

Turn 2 Necron Shooting
The Necron horde in the ruins blows the remaining bloodletters off of the board. Ah well ...

The HQ Horde opens up on the 'thirster once again - 38 shots, 1 wound!

Turn 3 Chaos Movement
The net closes on the HQ mob 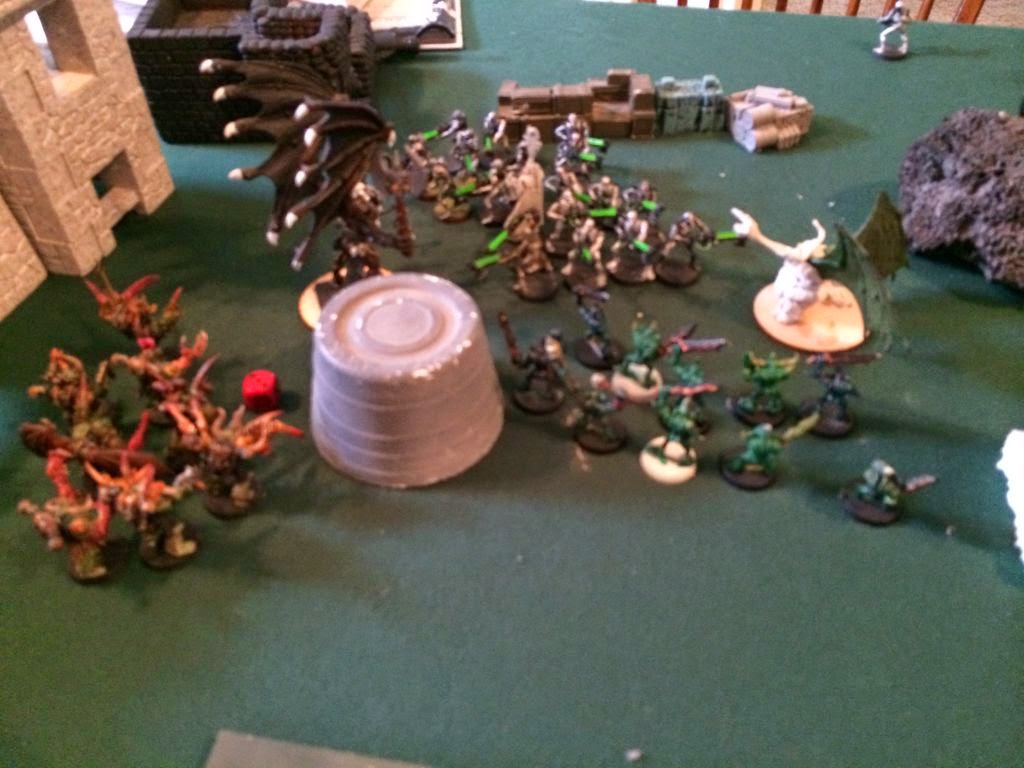 Also, a unit of cultists moves in between the havocs and the dead defiler

Turn 3 Chaos Psyker
The prince throws a plague wind into the necrons on the ruins to my right. It does nothing.

Turn 3 Chaos Shooting
The havocs begin softening up the necrons in the ruins. A few actually stay dead.

His warlord actually survives - with one wound - his challenge with the daemon prince, though it doesn't matter in the end. 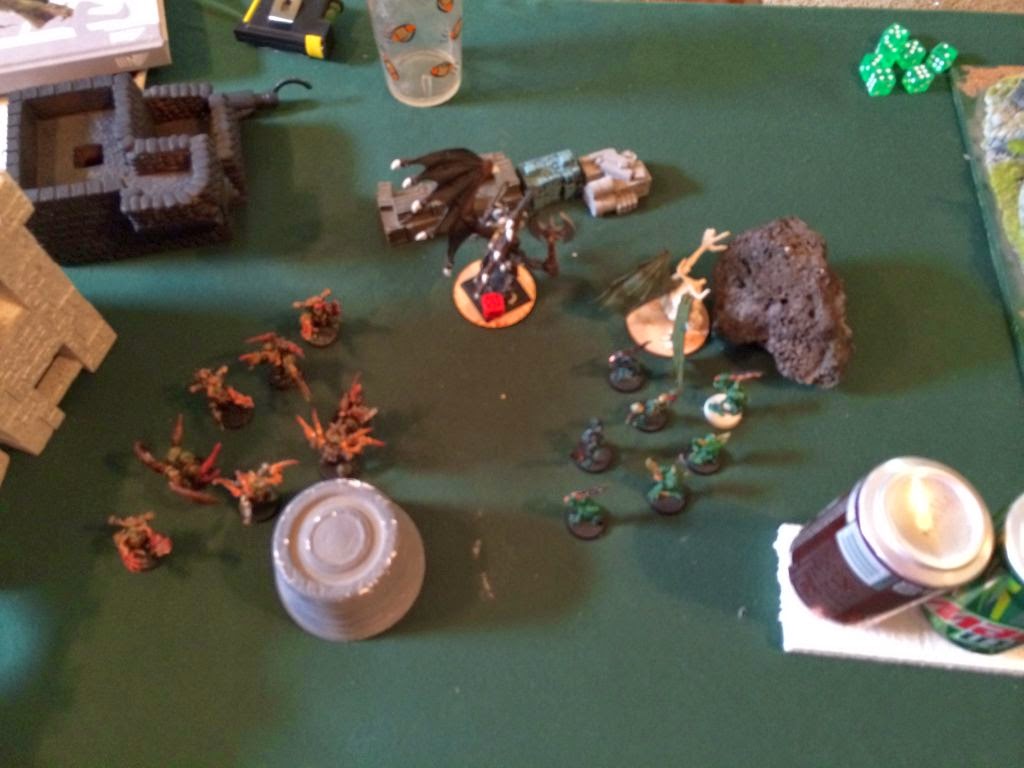 (This pretty much kills his morale though he does not actually quit).

Turn 3 Necron Movement
The orks eyeball the nearest objective and the small squad of plague marines guarding it and begin their advance. The back-of-the-table necron mob advances forward. The monolith tries to deep strike in by my assault force, mishaps, and goes back into reserves.

Turn 3 Necron Assault
The orks are not close enough to assault the plague marines, or anything else, but they did get close enough that it might happen next turn. The marines - and the Chaos Lord leading them - are not terribly worried about this.

End of Turn - Red gets no new VPs as he didn't really do anything. Chaos is still up 5-3


Turn 4 Chaos Movement
My daemonic assault group moves in on his mob in the ruins. 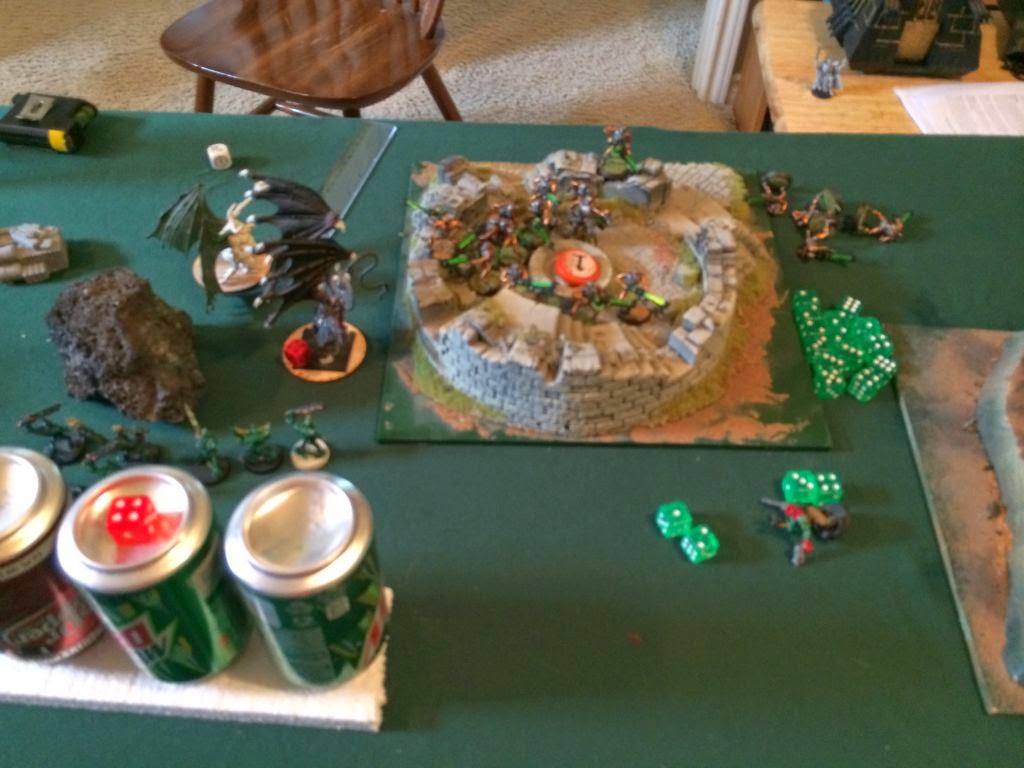 Turn 4 Chaos Psyker
The Daemon Prince summons a group of familiar-looking bloodletters behind the ruin we are about to assault.

Turn 4 Chaos Shooting
The havocs and the bloodthirster shoot up the targeted necrons while the cultists and the plague marines finish off the orks.

Turn 4 Chaos Assault
Realizing what's about to happen (and needing to get ready for a date) Red concedes. 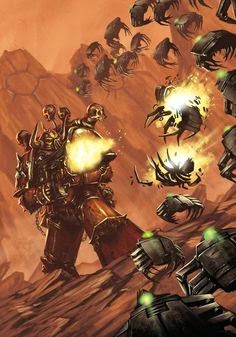 I like pretty much every thing I see in 7th. Most of the core move-shoot-assault saw only minimal changes. There are really three major areas of change:


Red would probably do better with a more mixed force. We've talked about it over the last few days and he has an idea on which direction he wants to go. He has other units, he just didn't use any of them in this battle.

As for me, what I want to do is a) play more and b) upgrade my terrain. I'm working on both now. Also, Chaos is a fun army. They may not be a "power" army but they have a lot of interesting units and look good on the battlefield.

If we can get another game in I will post it up next week!