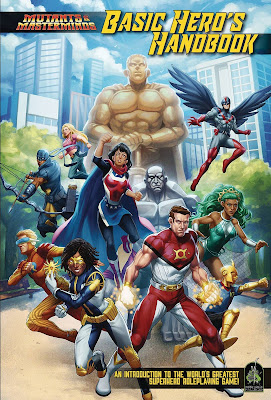 The short version: this is a lot like the recent "Beginner Box" products from some other RPGs without the box but with a little more long-term utility.

M&M 3E started with the DC RPG released in 2010 so we're at 9 years now for this edition, more than 1E and 2E combined. It's a nice change from the typical RPG life cycle and I assume that with the release of this book that Green Ronin is committed to continuing this edition for at least a few more years to come.

A quick breakdown - the first 3 chapters and about half of the page count is dedicated to making characters - stats, skills, powers, archetypes. Then you get about 30 pages (2 chapters) on playing and running the game, covering the basic mechanics and an intro to running superhero games. The last 30 pages or so is dedicated to 4 adventure scenarios and stats for some supervillians and teams.

As a veteran GM and Player, this book doesn't add much to the game for me directly but it is nice to be able to point a new player to this as a resource. the adventures are great droop-ins to any campaign and the bad guys are totally usable as printed though I am pretty sure I've seen some of them before. 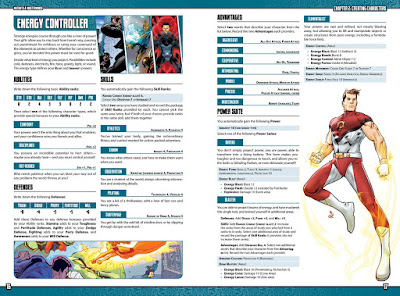 For anyone new to M&M I'd say this is the book to get because:


The picture up above is an example of how the archetypes work  in the book. You have the general type, and then several sub-type options to choose from within that archetype. To me it looks a lot like a class layout for D&D 5E - Class + sub-class options- and I assume that's deliberate to make it easier to grok for new players. It seems plenty smart to me and I have no issue with it.

However, if you already know M&M 3E and look closely at that you'll see what was the biggest surprise to me: No points!

And the second biggest surprise: No Power Levels!

Well, you can and they did. It is a limited set of options to choose from in this book, not the totally open-ended version found in the main book and at first I thought this was a fatal flaw. I mean, that's a huge part of the system right?

The more I thought about it though, the more I agreed with this choice for an intro product. In my experience new players to a superhero game do tend to follow some common superhero types. They may not want to play Batman directly, but the stealthy martial artist guy is a pretty common character and this book can accommodate that kind of approach within its "Crimefighter" archetype. This is a great way to get started and -GET PLAYING- without needing a week to "build" a character while still allowing for some customization. The best way to get your game going, and keep it going, in my experience. is to get people playing it, not just playing with it!

They started experimenting with this kind of thing in the GM Screen package years ago by including a random character generation system. it was refined in a later book and I assume this system is an evolution of that. once you have a set of interchangeable packages at PL10, well, if they work for random generation you can certainly make them work for a "controlled" generation system, and make them fit together even better. I'm glad to see the designers continuing to experiment and explore these options.

Power level is mentioned in the GM section but mainly as a tool for rating enemies. Changing up character power level is not really discussed other than "hey it's a thing and you can read more about it in the big book". It does mention that all of the characters created in this book are PL10 and all of the power limits presented are based on that level. 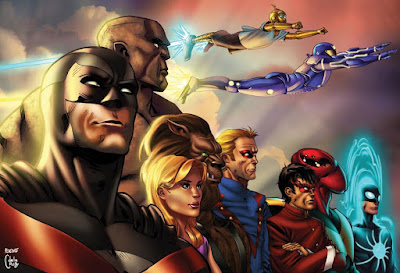 So ... if you have an established group playing M&M I'll say this book probably does not have much to offer you. The GM should get it because we get everything, right? Also it's great for bringing in a new player.

If you are new to the game and want to run it or play it or even start a new campaign for your group then I'd say this is definitely the place to start. It's a one-stop product that gives you enough to make characters, learn the system, and play through 2-3 sessions I would guess, possibly more if you start getting creative.

It's a 30$ book so it's not no investment but it's not bad compared to a lot of the big books pout there now and it's comparable to most of the Beginner Boxes out there today. The PDF is close to half that which makes it ridiculously easy even for the thrifty gamer.

As a follow up I'll  post up some thoughts on the rest of the M&M game line as it's been a while since I've touched on it and I have Superheroes on the brain right now - stay tuned as the blog staggers back to life!