So we're going to dust of the long-neglected Warhammer minis and try Kings of War tonight ... 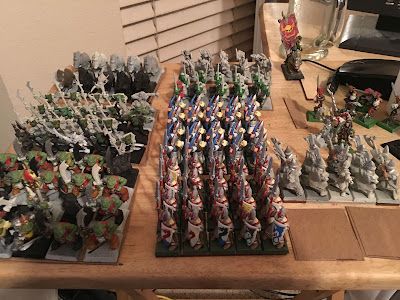 I'll let everyone know how it goes. Saturday may be Frostgrave's first run so I may have two new games to discuss next week.
Posted by Blacksteel at 12:00 PM 1 comment: 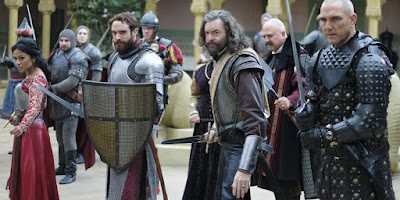 This is a very funny gem tucked away on ABC's Saturday night schedule. It's over now but you can catch at least a few episodes on the network site. What is it?


I mentioned it last year but season 2 is even better. I think my favorite episode is the one where they encounter dwarves, and giants, and a dragon, all for the first time. It's not exactly traditional but it's a bunch of fun and I am not usually a "hey it's a musical - awesome!" kind of guy. It works very well here though.

If you like any significant percentage of what I talk about here then it's worth a little effort to track it down.
Posted by Blacksteel at 10:37 PM 1 comment: 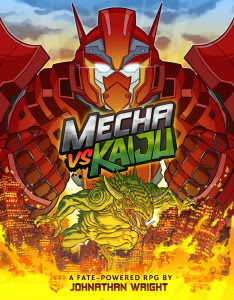 The short version: I so wanted to like this ...

I read this back before Christmas. Then I set it aside to give it some time to percolate. Then I went back and looked at a few specific things that were bothering me and ... they're still bothering me. Time to talk about it on the blog.

I have a huge soft spot for pretty much all of the kaiju movies - Godzilla, Gamera, King Kong Escapes, etc. They are one of those rarely obtained fruits from childhood back before everything was on-demand or even at a local video store. When one of them showed up on the Saturday afternoon movie listings (or one of the late night Saturday listings) it was a big deal. For many of them, watching on a big hi-def screen doesn;t really recapture the experience  - you have to watch them on a 19" tube TV, possibly even a black and white TV, to really go all the way back.

Nowadays, like so many nerd things, they're almost respectable, but back then while some kids loved them, most adults thought they were stupid. To a point, they are. But sometimes I don't want drama, or witty dialogue, or tastefully done nudity - I want to see a model city get crushed into rubble by some giant clawed feet. Not nuked and destroyed in one shot. Not a matte painting wiped clean by disease or a CGI background reduced to the near-silence of shuffling undead feet. I want to see models being viscerally, literally, stomped flat.

For that, there's one section of the movie universe that you go to. It's based out of Japan and subtlety is not listed on the ingredients.

As much fun as it is to watch, how much fun would it be to play as one of those things? Or even as one of the many human attempts to take one on in a giant robot? One of my earliest and fondest  Battletech memories is at a local con where 30-something players took our mechs against Godzilla. An RPG on the subject should be awesome!

It's for FATE - that's good, because that's a game I really want to like but I keep not finding a setting that really pushes me into saying "we're playing this next week".  A lot of them look good, seem like a fun concept, and then I dig into them and there's just not much there. I don't know if that's a signature of the system, of Evil Hat who publishes most of them, or just what other fans of the game prefer, but so far it's not helping me get into the game.

MvK, thankfully, does not have this problem. There's a pretty solid setting in this book though, much like a superhero setting, it's core is "now + some alterations". Nothing wrong with that - it's what I would want and expect in a Kaiju game.

The first part of the book is great. It starts with a tone-setting short story (and I mean short - less than 3 pages), a discussion of the inspirations for the game (everything you might expect), It then dives right into character creation - archetypes, skills, alterations to basic FATE to fit the setting - there are about 20 pages of this stuff and it's fine.

Then we start digging into the setting: a history of Japan with Kaiju (lots of nods to kaiju movies here), there's a discussion of the Mecha Assault Force (the central focus of the game - it's what your players will be a part of), rules for mecha in FATE (both designing them and playing them), sample mecha from the MAF (it's not Battletech or Mekton but it's plenty interesting for a system like FATE and I think it would be a lot of fun).

Then we get into the gamemaster section. There are spoilers below so be warned. 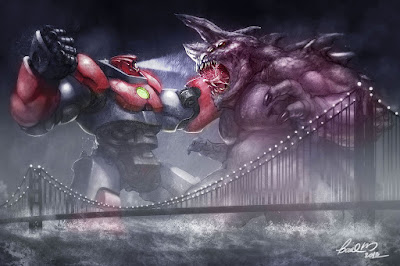 The first section for the GM has a bunch of sample kaiju and rules for creating and running them in FATE, much like the mecha section earlier. This is all good.

Then we get into the Secret History of Japan and this is where it falls apart for me: It's all supernatural. We get Kami vs Oni in pre-history. The Oni create Ogres and train humans in the dark arts who become ninjas, and they fight Kami-trained humans all through history.  The origin of the kaiju is tangled up with a demon-summoning ritual at the end of WW2 along with the traditional atomic aspects and this really derailed the setting for me. I don't mind supernatural elements being a part of the setting - they've certainly been a part of quite a few kaiju movies - but I really didn't want them to be the core of it and they are. The included campaign has ninjas (cool) and kaiju (of course) but it is mainly a fight against the Oni-powered Ogre Ninja organization and their efforts to control various Kaiju and use them to attack the MAF. Besides not liking the main badguys conceptually I also think it distracts from the main theme of this kind of campaign: STOP THE GIANT MONSTERS FROM FLATTENING YOUR HOME! I don't mind a ninja guest appearance. I don't mind a supernatural guest appearance. I just don't want it to be the dominant theme. I could rewrite it to remove this aspect, but it would be a very different campaign. Also, the way it is written feels more like an anime series than a kaiju movie or series of movies - one of the near-incomprehensible ones that you just have to go with, especially once you add in the supernatural stuff

I just really don't like the extremely heavy supernatural angle to it. It feels out of place to me and my own view of a kaiju universe. I was probably looking for more Pacific Rim - more straight-up man vs. kaiju. Like that movie, part of the campaign is discovering that there is an intelligent opponent behind the kaiju and then uncovering who they are and what they are up to. I'm cool with space aliens or dimensional aliens or even straight-up power-mad humans but the Oni/ogre thing just falls flat for me. I am pretty sure that if I ran it as-is my players would look at me like I was looking at the TV near the end of the Battlestar Galactica finale - "they're what?!" I just can't get onboard with it. 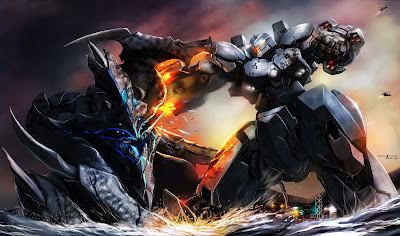 Now my own dislikes of the secret history aside, there is a lot of good material here. If the idea of a Kaiju-centric campign interests you and you are interested in FATE then this is still a great book. The "stuff I don't like" is less than a third of the book. The whole MAF section is a pretty good example that could be used in any game.

There is a website for the game that, while it hasn't been updated in a while, it does have stats for some additional characters like Optimus Prime and Ghidorah.

So, to wrap up: there are a lot of good ideas and useful material here, even if you're not playing FATE, and it's not like there are a ton of games on the topic anyway. Consider it, think about what you would want from this kind of campaign, and if anything in this review sounds interesting, well, it's not terribly expensive on DTRPG  - and it has a soundtrack too. How cool is that?
Posted by Blacksteel at 12:00 PM 3 comments: