Why I Like Rifts - Ley Lines, Nexus Points, and Magic 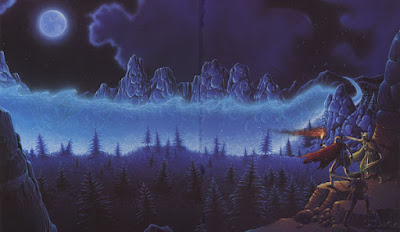 I touched on this in my previous post but I thought it deserved more discussion. Ley lines get occasional mentions in other games but they are a big part of the landscape in Rifts. Here's why:


Think about the above details. Before we have defined anything about kingdoms or races or other terrain we know that ley lines are where interesting things happen, and serve as paths to where more things can happen. Magic-using characters are likely to seek them out. Magic-hating characters might seek to avoid them, or they may seek them out to hunt demons or wizards or any other spell-tossing threat. Even without knowing much of anything else about the setting we know this is something to look for.

It also makes the calendar a little more significant. It may make a huge difference if there's an eclipse coming up if a nexus point is involved in one's plans. There are reasons to be in a particular place at a particular time, from traveling through a gateway to crafting some potent new magical item.

Once we do start fleshing things out, they help define the map. A nexus point seems like an obvious place for a wizard to live ...or a demon lord! Many wizards can teleport along a ley line with little effort, and some techno-magic devices can fly along a ley line - that could make it an easy path between cities of a nation or it might be a terrible window of vulnerability that must be patrolled. 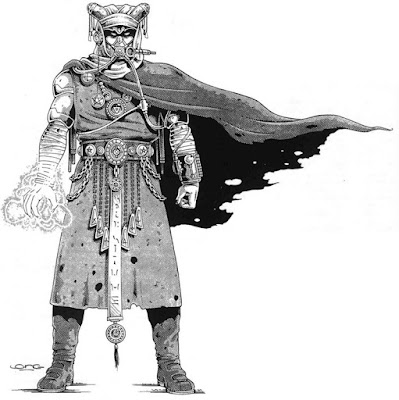 With Magic in general Rifts gets into more details than some games. Magic users can draw energy from outside themselves, typically from another living creature. The available amount is dependent on whether they are willing or unwilling targets, and then the energy doubles at the moment of a creatures death. This gives an in-game reason for why those evil types are always performing human sacrifices and might give non-evil types a temptation in difficult circumstances.

The thing I like about all this is that it grounds magic in the world in a very playable way and gives it some flavor that you don;t find in the typical D&D type game. Sure, you can still play a classic robed, bearded, pointy-hatted fireball tosser but there's more going on in the world than just that. Maybe the reason the warlord is conquering everything in the area like a madman is not because he's evil and that's what evil warlords do, but because his wizard has promised he can bring back the warlord's dead wife if he has control of a local nexus point on the day of the next lunar eclipse. It fits the setting and it's something the players could research and figure out to some degree because it's built into the setting.

It's significant enough that they made a whole class that has powers dealing with ley lines. It's great if you're especially interested in that aspect and it's one of the signature character types of the game. Even with the mechanics change I expect Savage Rifts will spend some time on "Ley Line Walker" as a character type.

So I like the presentation and the flavor of magic in Rifts and I'm looking forward to seeing what Savage Worlds can do with them.
Posted by Blacksteel at 12:00 PM No comments:

(I mentioned to Barking Alien a while back that I would do a post on "Why I like Rifts" as it's a game I like that he doesn't get and I know he's not alone. I think there's a segment of the gaming population that gets caught up in the messy mechanics or the 157 splatbooks and never gets to looking at the actual setting. With Rifts for Savage Worlds on the way I thought it was time to take a look at the setting again, so I will be doing a series of posts on "why I like Rifts". This is the first.) 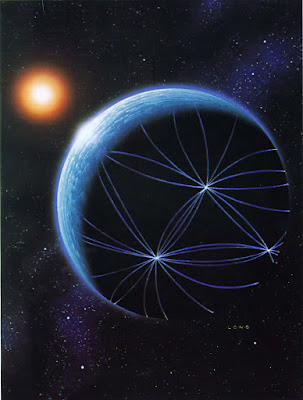 That title probably sounds a little strange but in any post-apocalyptic game the nature of the apocalypse plays at least a small role in shaping the setting. Most of them are the typical Nuclear/Biological/Chemical war, the traditional late 20th century end of the world scenario. Lately the zombie thing has made a strong showing. Rifts is different though.

The Rifts background is that sometime in the future, when technology is quite a bit more advanced than now an age of enlightenment ends in a series of short skirmishes that escalates quickly into a massive worldwide war that is over in a very short time. Thousands, then millions, of people are killed almost instantly. One of Rifts conceits is that psychic energy is doubled when something dies. The psychic energy released by this massive slaughter is so tremendous that the old ley lines, currents of magical energy from a prior age when the earth was a magical place, are reawakened and become more than just a current, they become torrents of psychic energy, rushing around the globe in a flood of power. Anywhere two or more lines cross is a nexus point, and at times of high energy these nexus points can tear open gateways into other dimensions. With this kind of energy unleashed, pretty much all of the nexus points around the globe rip open and stay open, and a ton of bad things come through, adding even more carnage to the apocalypse. Large areas of the land phase in and out, trading places with other dimensions, the old continent of Atlantis is pulled back into the world, and the earth is now a supercharged magical dimensional nexus point.

The reasons this stands out to me are these: 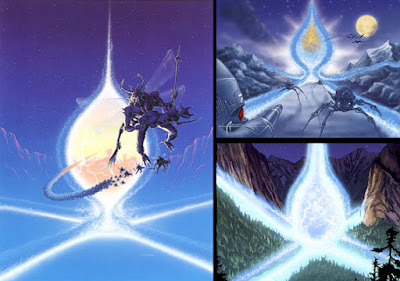 It pushes the apocalypse to be more than your standard nuclear war scenario. It explains both the end of the world and the re-entry of magic into the world at the same time. It sets up the ley lines and nexus points that are a fairly significant feature of the setting. I'll touch more on this in a future post.

One possibly overlooked aspect of the coming of the rifts is that it is considered tragic by most of the humans of earth, something to be "fixed", not some great blessing to be appreciated. Humanity used to own the planet (and some of the solar system) and that's no longer the case. Of course there are differing views but the biggest human powers view the time before rifts as normality, and the time since as a continuing war for the survival of humanity against an invasion of alien monsters. This coloring of viewpoints leads to some interesting shades of grey when it comes to non-humans who were born on earth and consider it home. That is, if you choose to explore it. Like many of the elements of Rifts, you can choose to ignore it and run a straight up shoot-and-loot campaign or you can let some of those differences play out between PCs and NPCs or even within the party. It's a nice little extra element that pushes things into more complicated territory than good vs. evil.

So that's the first element that caught my eye with Rifts and one that should remain interesting regardless of the system used for the setting.
Posted by Blacksteel at 12:00 PM 1 comment: