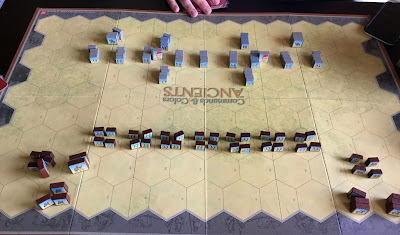 So Blaster and I have managed to restart our extremely long term Command and Colors Ancients series. This time we fought "Dertosa" which historically was a Carthaginian loss. Since the game plays fairly quickly we always play each scenario twice - once from each side. This time Blaster won both games so each side went 1-1 though that second game was really close as we both had 5 flags the last few turns and the win was to get 6.

The funny thing is we read through the "Cannae" scenario and were all fired up to fight one of the more famous battles of the ancient world but I walked away from the table and somehow the book got flipped over and we set up for Dertosa (the next battle in the book) instead. Ah well - it's probably good to have a warm-up before the bigger fight anyway.

I did not realize quite how long this had been going on til I looked back at the blog and find the first battle was in 2011 ... that is a really long time to still be playing through the first set of battles.

I suspect we will pick up the pace, considering how much we both like the game - especially now that I know.
Posted by Blacksteel at 7:20 PM No comments: