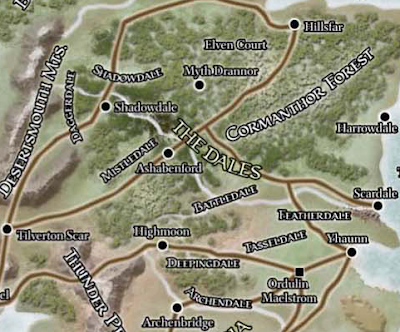 As I mentioned in an earlier post I have decided (after much waffling) to convert the Temple of Elemental Evil to 4th Edition and run it for the Apprentices. Knowing that the upcoming holiday weekend would be a good time to kick things off I spent some time going over my notes, rethinking a few things, looking over the maps one more time, and just doing some of that little tweaking that a 3rd look sometimes demands. I am using the original boxed flavor text so I mostly focused on mechanical things. In fact, my approach to running this is going to be to have the original adventure open for that text, descriptions, and notes on where the treasures are hidden and as a general guide for improvisation while I have my 4E mechanical details ready on another set of papers for skill checks, traps, and combat encounters.

The one non-mechanical area where I did go completely overboard was where to put the adventure. I have previously discussed setting it in Impiltur but upon looking at it again I decided the flavor just didn't feel right and besides I was planning to put all those Orcus-flavored original 4E adventures there. I needed some good solid farm country (for the village) near a major human kingdom (Furyondy in the original), a major elven kingdom (Celene in the original), some gnomes would be nice (Kron Hills -hah, good luck finding that kind of thing anywhere but Greyhawk), but it all needed to be kind of in the middle of things yet kind of outside the borders of any major power (Verbobonc in the original). So I spent several hours poring through old Realms material, chose and then discarded several options, and finally said to heck with it and put it in the Dalelands, Misteldale to be exact.

Yeah, I know, it's the most over-studied, over-emphasized, over-populated-with-high-level-characters part of the world - but -  while it was The Main Area for 1E and 2E, it was not really an area of focus in 3E material and is merely one entry among many in the 4E campaign guide. Additionally, most of those old NPC's (good or bad) are dead with the timeline advance, so the geography and general tenor of the place is still there without all the old heroes (and many of the old villains) cluttering things up. The layout is perfect with Cormyr taking over for Furyondy, the renewed Myth Drannor taking over for Celene, Archenbridge taking the place of Verbobonc, and while by the book it lacks the gnomish population, I can work some into the area if I feel the need. Also keep in mind that the Apprentices have never played or read any Forgotten Realms campaign material so it's not over-done to them - it's just a new area to explore where I happen to have tons of history just waiting to be discovered. I thnk that's important - it's "History" - not "Competition."

For Hommlet itself I made no major changes. Most villagers are Human Rabble (Lvl 1 minions) with levelled villagers taking whatever human monster entry seems most appropriate at the time - there shouldn't be a lot of fighting here so I'm not going to set up any kind of balanced encounters in advance. If something goes wrong then Rufus and Burne will be dealing with it. Jaroo is a druid of Silvanus, The temple is a temple to Chauntea. Rufus and Burne (probably 8th level humans using the class templates from the DMG) are part of the Riders of Mistledale who are sort of a local sheriffs organization of 20-odd characters that the PC's could end up joining if they wanted to do so. They can buy gear in the store, have things crafted or fixed at the blacksmith, find rumors and stay at the Inn of the Welcome Wench, and generally do everything their 1E/2E counterparts did back when.