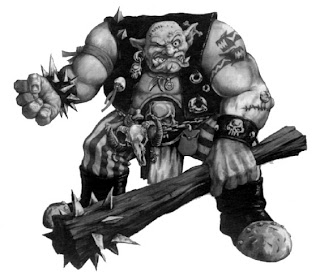 Our heroes, picking up from last session, were investigating the dungeon beneath the Moathouse outside Hommlet. After fighting off the Green Slime they retreated back outside and camped for the night. While encamped they spotted a lone figure moving through the semidark nearby and moved to investigate. It turned out to be an Eladrin, Dayeth by name, who had fled a bandit attack some days earlier and had been wandering lost in the wilderness ever since. The party brought him in, fed him, told him what they were doing (and that they had slain the bandits) and he agreed to join them in their investigations.

Re-entering the ruin, the adventurers went back downstairs and decided to open up some doors. Smashing down one led to an empty room - but it had another door. Smashing that one down led to an armed and alerted ogre and a seriously dangerous combat.

"You seek to slay Lubash but Lubash is ready! Now you will die!" was the opening line of the fight. A vicious fight erupted as the ogre tried to hold the party in the doorway, slamming back anyone foolish enough to push into the room. The Swordmage though knew his stuff and managed to hold the beast off long enough for the sorcerer and then the druid (and Po) to force their way in, though not without a wallbanger of a blow to the unfortunate druid. Doing this meant that the Swordmage did take a fair beating, and seeing this the horrified Eladrin wizard was only too glad to stay back and throw spells from the previous room, aiming through the doorway.

Mighty though he was, Lubash was eventually surrounded on all sides by his enemies, and died a warriors death alone in his lair beneath the Moathouse, feared by many but mourned by none. The heroes collectively took a beating but no individual was hit enough to fall - they are getting the hang of this now. Looting the ogre's room led to a nice stash of cash and a magical cloak - all in a day's work for this forcible fivesome.

DM Notes: A whole lot of this session was used up in adding a new player. A friend of one of the Apprentices was interested in the game and had received some of the books for Christmas and he joined in. Of course hand-rolling characters in 4E just isn't done -not if you want the math done right for a first-timer anyway - so he tuned up his character concept and his math skills in the character builder while their characters were swapping stories over the campfire.


As a result we didn't have a ton of time left and as luck would have it they took a turn (through two stuck doors!) and ran into one of the tougher monsters on this level, Lubash the Ogre. I decided that a single ogre was out of whack for a whole party, even if they were just second level, so Lubash became a Grizzled Veteran Ogre (template from DMG2, pg 127) which effectively makes him about the same value as a Level 1 Solo - good enough.


It was a good time for all of us and brought the party together against a single dangerous foe in a good way - with no casualties! They are quite a bit better at this than when they started - clearly I'm going to have to work a little harder.
Posted by Blacksteel at 12:00 PM