From the Archives - A Scarred Lands 3E Campaign Snapshot 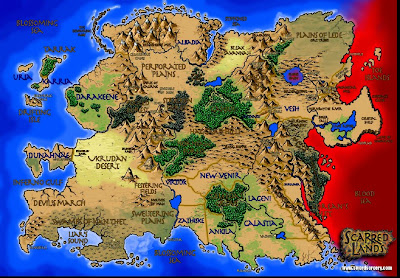 I ran across an old email from when I was updating a returning player who was joining the campaign and thought it was interesting.

Our first session in the Scarred Lands was 5/7/05 with the adventure "The Serpent Amphora" - rememebr that one? The really tough lizard-guys flatten the party to cries of "we're only 1st level" and "killer DM killer DM"? Ah, good times...


Other published adventures along the way have included "The Wizard's Amulet", "The Dragonfiend Pact", and "The Crucible of Freya".


I believe the Swashbuckler left us after Session 8, the long river voyage to the trading post at the
southern edge of Vesh.


We are now up to Session 22, which we just finished.


So we have spent about 11 months of real time, 4 months of game time, and we're running about 6th level on average.


That seems really low (note to self, party not dying enough, probably getting cocky, need to restore
balance)


We have spent about half the campaign in the current city/area/dungeon. It does seem to be working better than the temple camapign in that regard. Is everyone cool with that? There are other interesting areas around here, but no one has really gone looking for them yet.


One thing I'm noting here - the party wasn't much on sandboxes even back then, as i had seeded several other things in the area around the city and dungeon we were in and they had little interest in exploring - it was very much "let's finish our mission" when it came to how we spent our sessions.

This game eventually ended in an effective TPK where the cleric was slain y undead and came back within minutes as an intelligent undead version of himself, and took great joy in converting the rest of the party to the same state. All except the wizard who was secretly a dark elf, and her love-smitten bodyguard the fighter who remained safe behind a wall of force and then headed off to her homeland. It was a very memorable if unplanned and not wholly positive end to a campaign.
Posted by Blacksteel at 3:57 PM