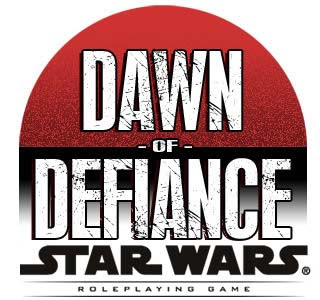 We kicked this one off on a Saturday afternoon with a few hours of character creation and catching up since it has been a couple of months since our last gathering. The bad thing was that no one else has a copy of the book, and given the price on the secondary market they aren't likely to pick one up either. So character creation took quite a while but this gave us time to work out backgrounds and ties between the characters so it all worked out. No one else has played either, and I've only run a few sessions for the Apprentices, so the mechanics will take a little time to smooth out.

So a lot of the session isn't really anything to relate here. Let's get to the party:


As you can see a theme quickly emerged. The campaign is set during the rise of the empire era, just a few months after Episode III. Jed's player had been working on a background and decided that he was an honest cop who was forced out when the Empire took a firmer hand with his homeworld and due to the circumstances around his departure he was now a fugitive. I had also emphasized that aliens were being pushed aside in many places in favor of humans so our Twilek was a successful corporate type who was downsized as the Empire rose. The Jedi - well that fit right in. Our other soldier and scoundrel got on board with it and pretty soon the whole group is sitting around a table in a cantina on a run-down space station orbiting the planet Brentaal...
Ardana is trying to organize a way off of this dump and has managed to recruit a pilot, some bodyguards/gunners, and a minion/copilot - now she just needs a ship. As the group discusses their options and their limited funds, they notice oddly observent men standing around the promenade and decide to keep an eye on them. A wounded woman stahhers into view, then lurches down the main way. Ril moves to aid her and is warned off by a pair of stormtroopers who move to arrest her. As Ril attempts to intercede blasters are drawn and violence erupts. The none-too-subtle agents join in with the stormtoopers but in short order all 4 of them are down while Ril and Talor sport some new scorch marks. They grab the wounded woman and hurry off the promenade.
In an empty room on the station they attend to their new friend, "Maya". Having determined that they are no friends of the Empire she thanks them and asks if they can help her finish a job, snce she is now too wounded and too wanted to finish it herself. She offers them payment as well as gratitude and everyone agrees.
To assist Maya the team has agreed to head down to a cargo bay and talk to a local "crime lord" named Switch. The bay is guarded by some gammorreans but Ardana skillfully talks her way past them, with the help of a few credits. Inside they find a droid who thinks he's a crime lord who is sitting behind Ardana's old desk! None too pleased, she refrains from an immediate repo attempt and the group slowly wheedles the location of some special cargo out of him. This cargo is what Maya needs to pick up and deliver to finish the job. Satisfied, the group turns to leave...
DM Notes: The players came together nicely and we jumped right into things. After the initial shoot-out dealing with the guards and then with the crime-bot was a good way to let them know it won't ALL be blaster fights. Plus Lady Blacksteel got to use her persuasive abilities, which makes her happy. Unlike a lot of my past campaign kickoffs, this one starts off kind of small but I think it was effective, especialy considering it was after a good two hours of character building and general gabbery. The desk thing was just out of the blue from LB - she decided that she had been a pretty well-place corporate recruiter (explaining her skills & talents) and that his nice desk (mentioned in the adventure) had obviously been hers before she was let go. It was pretty funny, and she was the player who was least interested in a Star Wars game to begin with. Anyway, the fuse is lit ... now to see where it goes.
Posted by Blacksteel at 12:00 PM

This totally makes me want to play in or run a Star Wars game. I've never had e chance, I remember day-dreaming about how cool it would be to have a role-playing game based on Star Wars way back when I was in 5th Grade. Tihis was years before the West End D6 version came out.

It's a lot of fun and a nice change of pace from D&D, even when the systems are similar mechanically. Part of it is attitude, and part of it is a familiarity unlike anything else - I mean, many of us who play these games have been doing it for a long time now, yet Star Wars is one of those things that we've known even longer. To get a chance to put that intimiate knowledge to something resembling practical use is a pretty big kick.

One other thing that I had not run into before is the plethora of apps out there for Star Wars sound effects. With all of the phones and tablets at the table, we quickly had a constant barrage of blaster bolts and lightsaber sounds as each player took their turn, and of course I already had the music going in the background - even tabletop gaming is affected by the ongoing tech revolution...

And he wasn't a fugitive until the boys he was negotiating with to fly off the station opened fire on Imps. He was just a freighter pilot who felt he'd been conned out his ship by all the new bureaucracy and new forms required since the Chancellor declared himself Emperor.

How's a man supposed to make a living if the government can just up and seize his ship? I tell ya things were better back when the Senate was in charge and there were 100 factions fighting 100 other factions. All you had to know was whose palm to grease!

This one guy in charge of it all and his goose stepping thugs in gray is cramping my style! ^_^

On the other hand, with all the legal hyperlanes being taxed and controlled and a whole crew of newly wanted downtrodden hopefuls along, suddenly there are lot of credits to be made by those willing to bend a few rules here and there.

And there's always the damsel in distress in need of a little authentic hero'ing.

Time to step it up!

What? The Separatists voiced their opinions about the Galactic Republic for years and even seceded. A little discontent from the working class isn't going to get me disappeared.

Sure I don't like all the power being in the hands of one guy, but at least that one guy is the Chancellor who lead us through the Clone Wars, it's not like he's some dark overlord building planet destroying weapons that'll disappear someone at the first hint of sedition.