I finally got around to picking up this book. I had not heard much about it, and maybe you haven't either, so let me share: If you've been playing (and liking) D&D for more than 1 or 2 editions, go get it. It's the missing piece to make an old-school flavored 4E campaign really hum.
The book opens up by adding in the missing armor types from older editions - studded leather, ring mail, banded mail, splint mail, full plate - I like that it's here, and I like the way it is handled mechanically as there is more too it then playing around with AC bonuses.
A lot of the book is magic items, namely old school magic items like the flametongue and frostbrand swords, the necklace of missiles, and the wand of fire - those kinds of things -but it's more than that. It also adds in potions, as in heroism and giant strength, and the cure light wounds/moderate wounds/serious wounds ala third edition.
The best part though, is near the end. A section on hirelings, henchmen, and pets is a nice warm-up, including rules and details for the hirelings and pointing to the DMG 2 rules for the henchmen and pets while giving some nice examples (including statblocks) for each. Then, we get to the equipment section: 10' poles, caltrops, ball bearings, hammer + iron spikes, jar of glowworms - it's stuff straight from the Basic & AD&D equipment lists and there are mechanical effects for all of the ones that need it! Hammering a spike into a doorframe boosts the DC to  open it by 5. Dumping some ball bearings in a square makes it difficult terrain, a crowbar gives a +2 bonus to open doors or chests - all very simple stuff that gives players a good reason to take the gear.

So I have to say I am 100% happy with it and it will be getting used as soon as next week, as some of this gear will be appearing in me 4E Temple of Elemental Evil campaign. It makes translation to 4E that much easier. I am also planning the new "main" D&D campaign to play with the regular group and I have to say an old school flavored Greyhawk game is in the lead as of now, mainly because I see more and better ways to handle it with this book on my shelf. 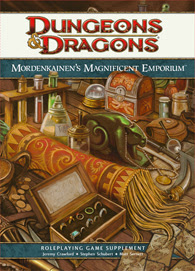 Glad to hear you liked the mundane gear - that was one of my sections! Mike Mearls gave lots of good feedback about getting the mechanical effects right; it was kind of a primer in how to DM 4E in an old-school way.

Well you did a great job! Thanks for getting it right.