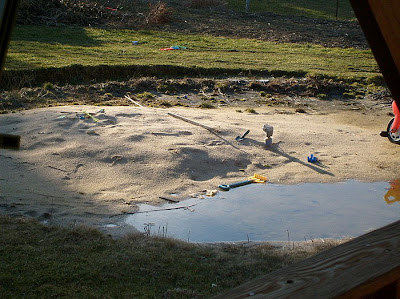 So I presented my West Marches style 4E campaign idea to my players and was met with silence - for several weeks. Then finally one of them spoke up and said he and some of the others weren't interested because if they wanted to play storyless games with random groups of strangers they had Living Forgotten Realms and D&D Encounters at the FLGS.

Alright, so apparently I can blame WOTC for screwing up my dreams of a Legendary 4E West Marches game - great.

He went on to say that the reason he played in my games was pretty much the opposite of the things you get in a sandbox game - character connections and feeling like he was part of a story without being railroaded.

Oh. Guess it's not entirely WOTC's fault then.

I should probably take that as a compliment as in the big picture it is - as opposed the small picture where it's a "we don't want to play the game that you've been consumed by for a month".

I could put the word out and try to scrape up enough new players to make a go of it anyway, but I was really counting on my regulars to form the cadre for the recruits, and the lack of interest on their part pretty much sweeps the leg for me. I'm going to put the West Marches on the shelf for now.

In the meantime I'm running Star Wars and I'm happy to be doing it. It started off as a kind of fill-in but I like the system enough that I'd be happy to run a full campaign. Plus I'm getting to play Brutallus Maximus again which is always a good thing for anyone who DM's almost exclusively.


Since I've been told I should expect to run D&D again in the near future I've already started coming up with options. Here are a few that I'm pondering this week:


So, there I am, looking to pull victory from defeat. More on this later.
Posted by Blacksteel at 6:00 PM

You could of course play your type IV sandbox... and the players can play their game. There is not a reason that one can not be the other, you just have a more preped version of a sandbox, and rely on them to make more decisions.

The thing is if I only have one group of players, and they spend their time looking for rumors and leads that I drop, then it's not really a sandbox game anymore at that point. I try to keep multiple paths alive anyway as they level up, but it's not really a classic "sandbox" environment, more of a branching flow type approach.

I'm not rejecting it for good - I'm just letting it go for now as if I try to run it like I was envisioning then we're all going to be unhappy. Plus the open table thing was a big part of it too and they really seem uninterested in that angle. I'll survive - I have enough other options that we're still going to have fun with it. Plus they owe me now, and I'm going to make them pay by going old school one way or another.

I've found the classic sandbox not to much to my current group's (most recent group's) liking either.

What works better for me is a sort of branching flow/directed sandbox approach. The world they are in is a sandbox, but pails, shovels and various small toys have been left in the sandbox for them to find (or not) in order to give them some ideas on where to go and what to do. I don't really show to much favor toward any one item or idea so they are free to pursue the story that interests them.

As time goes on, I use the early plots to reveal more of the world and then ask the players where they want to go or what they want to do next. This is when the campaign takes a turn toward a more traditional sandbox, with players saying, "Well, we were wondering what was over there on the far side of the map".