What is Lords of Creation? It's an early take on the multi-dimensional RPG published by Avalon Hill in 1984 and written by Tom Moldvay. It's cool to me, but it is pretty strange. The assumption is a group of characters that start of in modern times but in short order are encountering magic, alien technology, other dimensions, and time travel and taking it head-on. There are different skills and powers that characters can learn along the way, equipment from bronze age to Star Trek type weaponry. This is "weird" in the sense of "what kinds of RPG's get published" rather than in having a really abstract concept or setting. 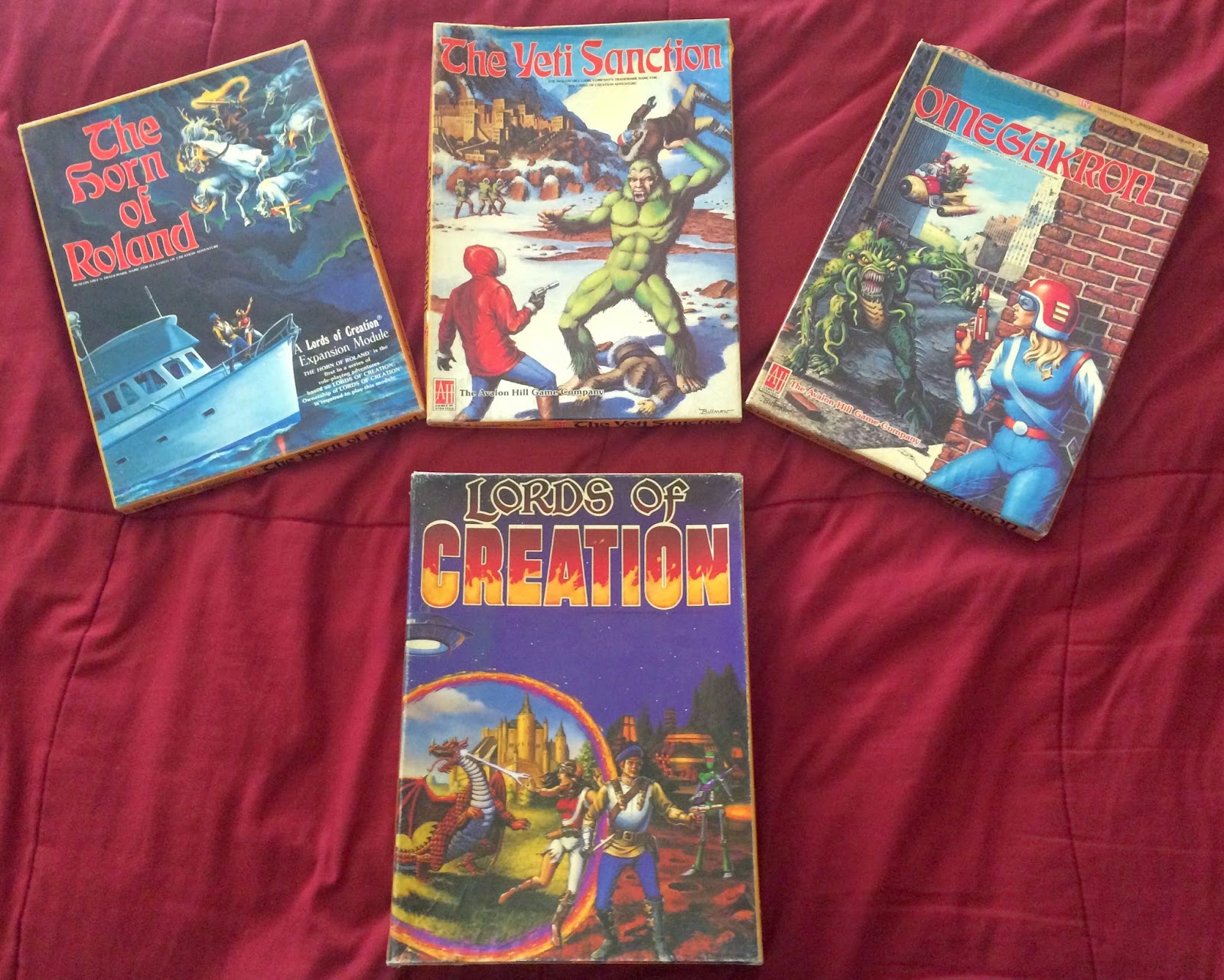 I've run LOC all of about three times over the years. I've never made it to a 3rd session.Back when I think the concept was just too weird for most players to really get into it, and maybe I didn't do a good job of presenting it , I don't know. Nowadays I suspect it might get a better reception although I wonder if "cooler" settings and mechanics might have passed it by. Despite this disappointing reception I can never bring myself to get rid of it as it just has so much potential.

I really need to write up a full rundown of this game but I can share some high points here.

Character stats are Muscle, Speed, Stamina, Mental, and Luck. Players roll 2d10 for each. The modifier for each stat is the score /10 rounded up, so most will be a +1 or +2. There are no classes or races - the assumption is that everyone starts off as a human from modern times.

There are 21 sets of skills, sort of like a skill tree as each is ranked from 1-5 and each rank covers a specific area of that skill. For example, "Mechanic" is 1 - land vehicle, 2 - water vehicles, 3 - air vehicles, 4- futuristic/magical*, and 5- special ships*. That 5th one covers thing like fixing the TARDIS - dimensional/time traveling ships. The "*" means they require special circumstances to learn, like being in an environment where such vehicles are present. Among the skills are some interesting choices like Commando, Stage Magician, and Theatrical. There is a Futuristic and a Magical set to allow characters to pick up some useful abilities in those kinds of settings. There are also skills for particular weapons, but only half of a character's starting skill points can be spent on them. Quite a few of the level 4-5 skills are futuristic/magical and so would not be an option for starting characters, but most PC's could get to levels 2-3 in an area or two and pick up a weapon skill as well. 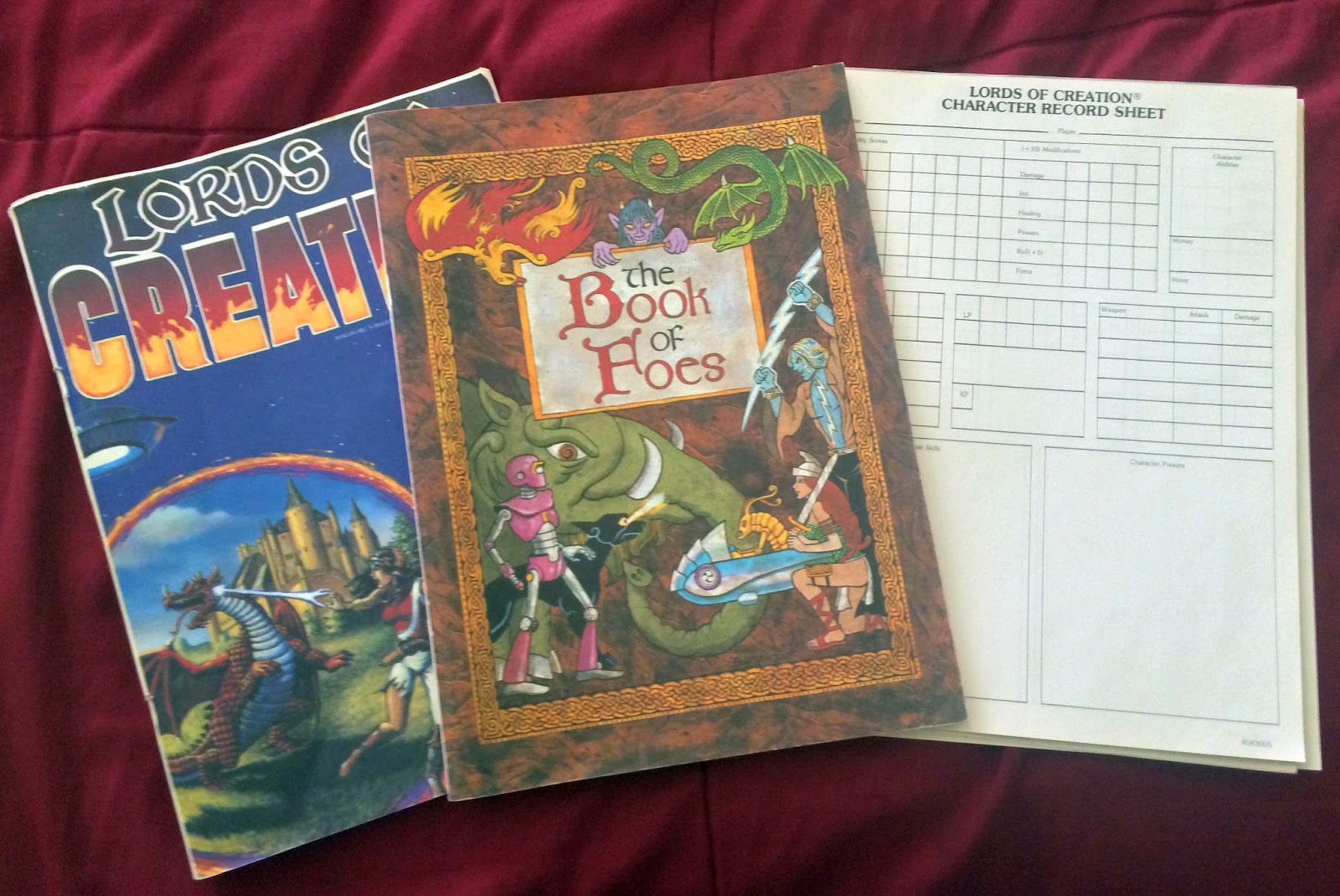 Skill adjudication takes two approaches. First the recommendation is to assume that skill level indicates general competence and that many tasks should be assumed to succeed if they make sense compared to the description of the skill. If there is doubt, the base chance for success is 20% per level. It's a far more modern approach than most of the percentile systems of the day where the general tendency was to roll for everything. Here it's explicitly stated that the assumed success approach saves a lot of time and die rolling and puts it on the GM to make the call on when to use each approach.

Combat is similar to D&D. Roll a d20, add and subtract modifiers for skill, armor, and conditions like range or darkness. It's a roll low system, so a 20 is an automatic miss here.

There is a sort of experience table. Experience adds to "Personal Force" and as it increases, characters gain certain set powers like Dimensional Sight and Dimensional Travel, and can also choose from a list of powers such as Sorcerer, Clairvoyant, or Cyborg. These are set up with a 1-5 progression like skills. The set powers basically facilitate further adventures as it's much easier to set these things up if the players can see ghosts - or talk to ghosts with Dimensional Language! The selectable powers give another layer of customization and while not quite super powers do give the characters options that normal people would not have.

One other interesting item: The final preset power is "Construction" which allows the character to create a pocket dimension or other location which they can shape according to whatever physical laws they desire. This could be any thing - a new elemental plane, the death star, a layer of hell, or a Lego universe. The idea, which is even stated with the power, is to guide players into becoming GM's as they begin creating their own settings and adventures for other players. I don't know how well it would work in practice, but it's a very cool idea and I think it's the only time I have seen a mechanical approach to this in a game. 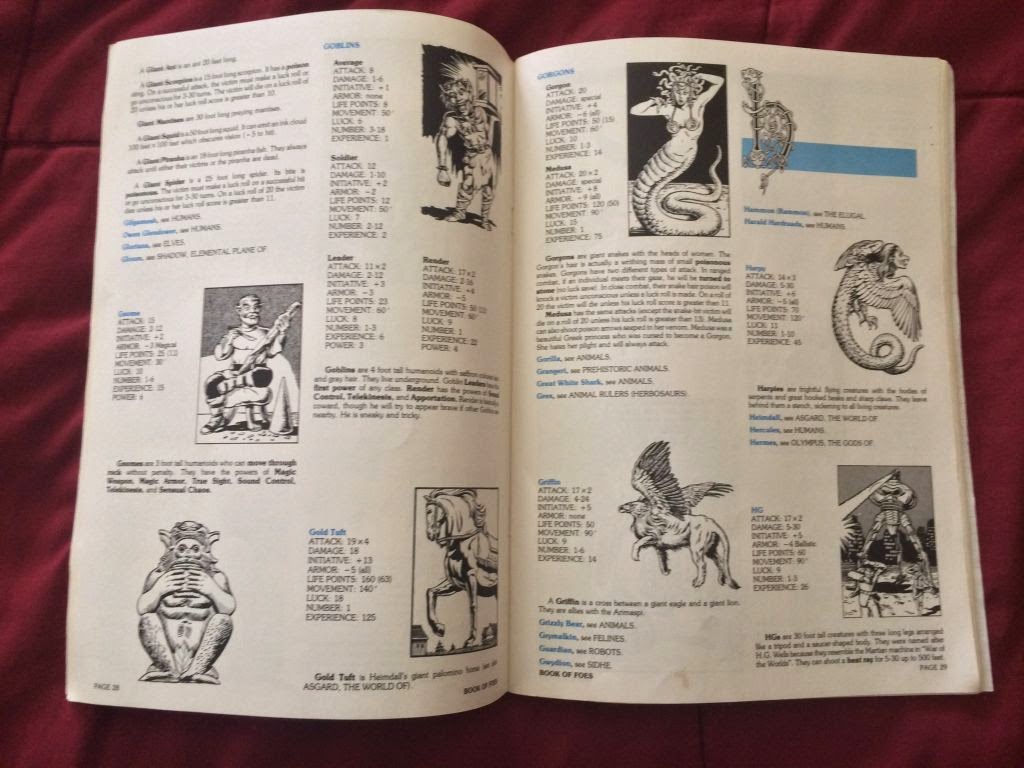 The "Book of Foes" includes all kinds of things, from goblins to griffons to "HG's", the tripods from war of the worlds.Many entries for races (rather than unique monsters) include multiple entries like with the goblins above. There are stats for "average", "soldier", "leader", and then "Render", who is a unique individual with some different abilities and a sentence or two of background or motivation. With touches like that it feels very much like it's built to be used, not just as a work to be admired. 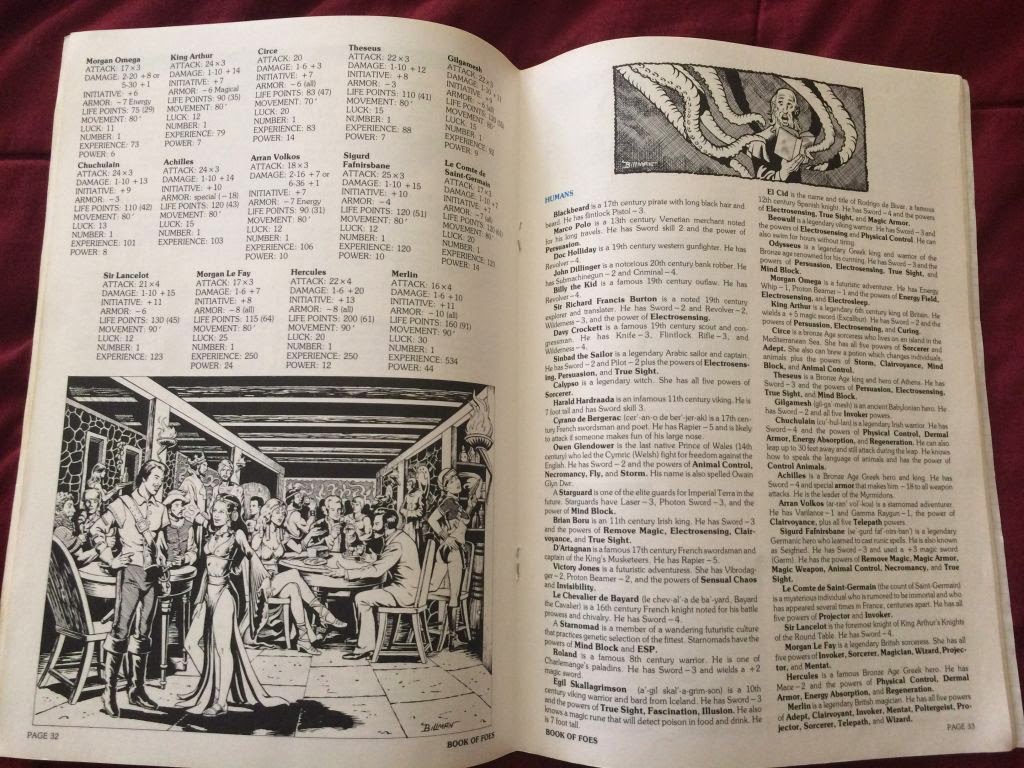 There are also a few pages covering historical/fictional heroes like Hercules, Lancelot, Sinbad, Doc Holliday, and Cyrano DeBergerac. Why not? With this kind of game there's a  pretty good chance they could turn up in play. 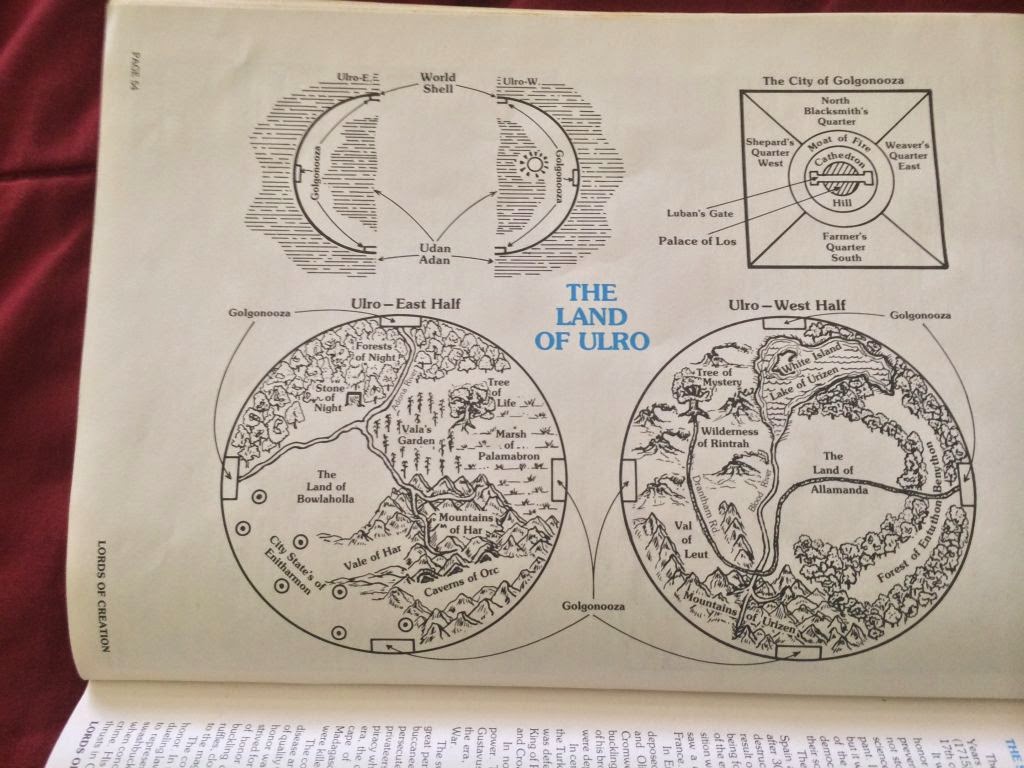 The game also covers (in a few pages each) several different settings with maps and notes. It's at least enough for a visit, maybe even an entire campaign for a motivated DM. 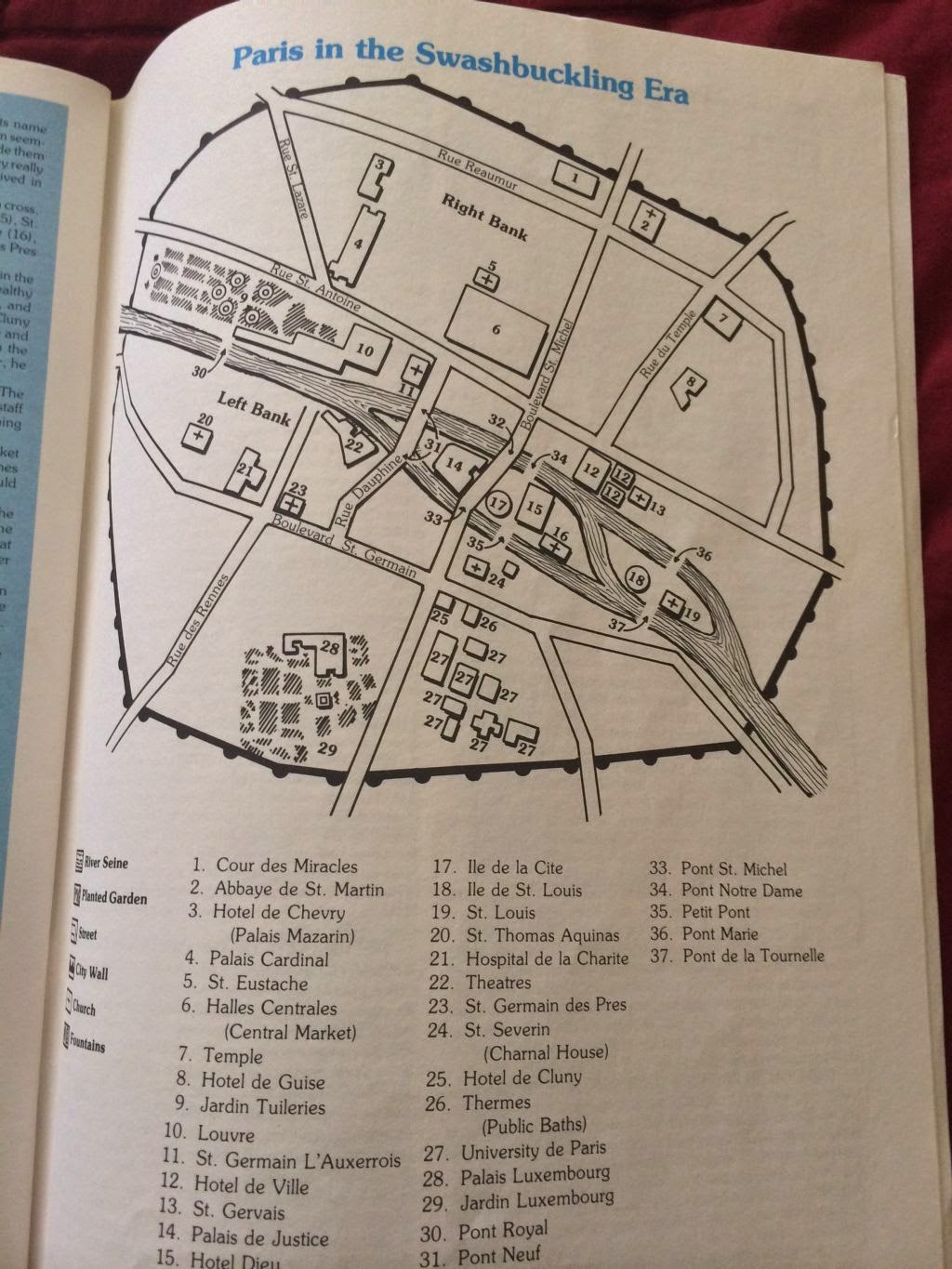 Most are entire worlds but some are a little smaller scale. 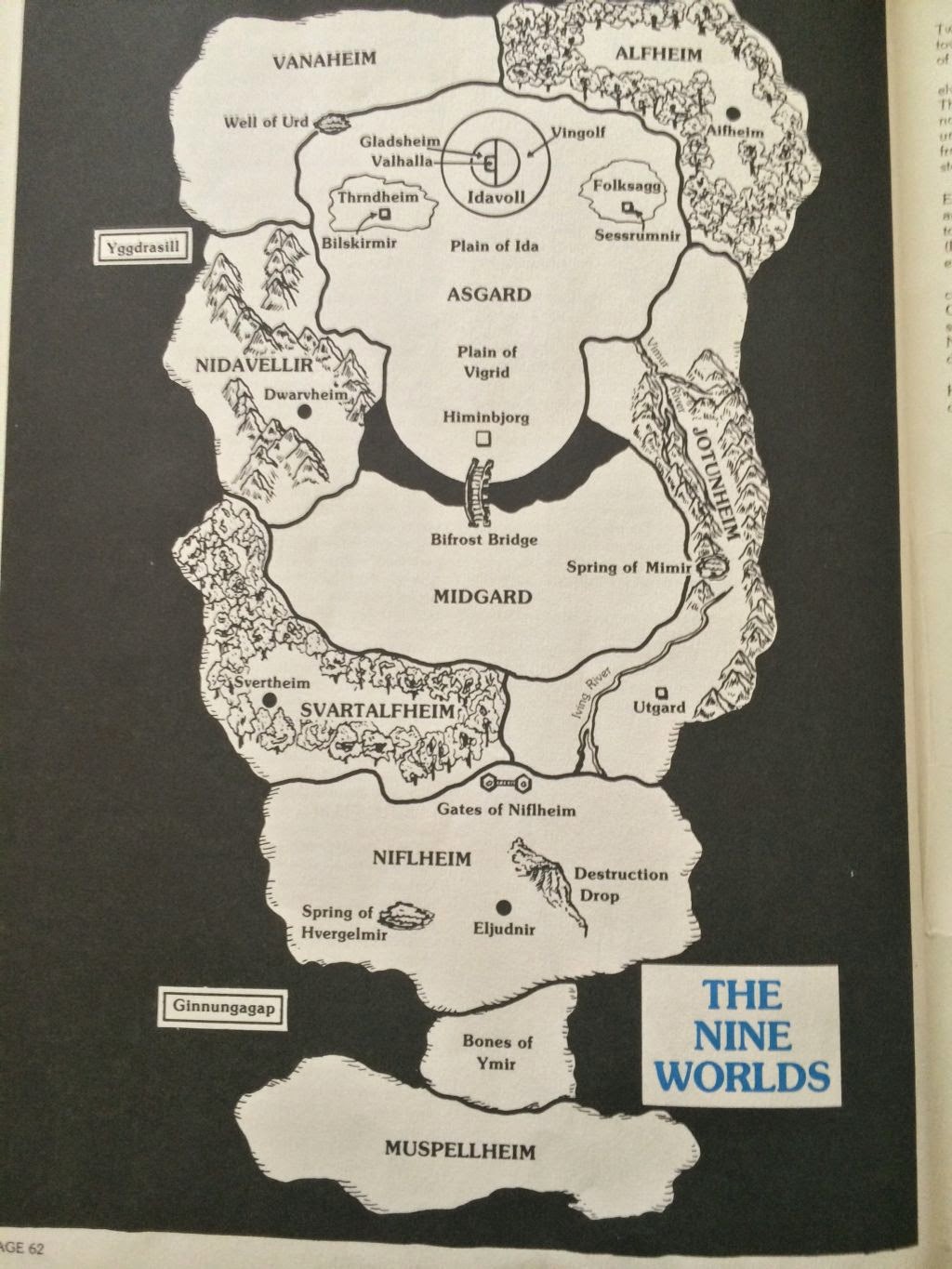 Some are a little larger. 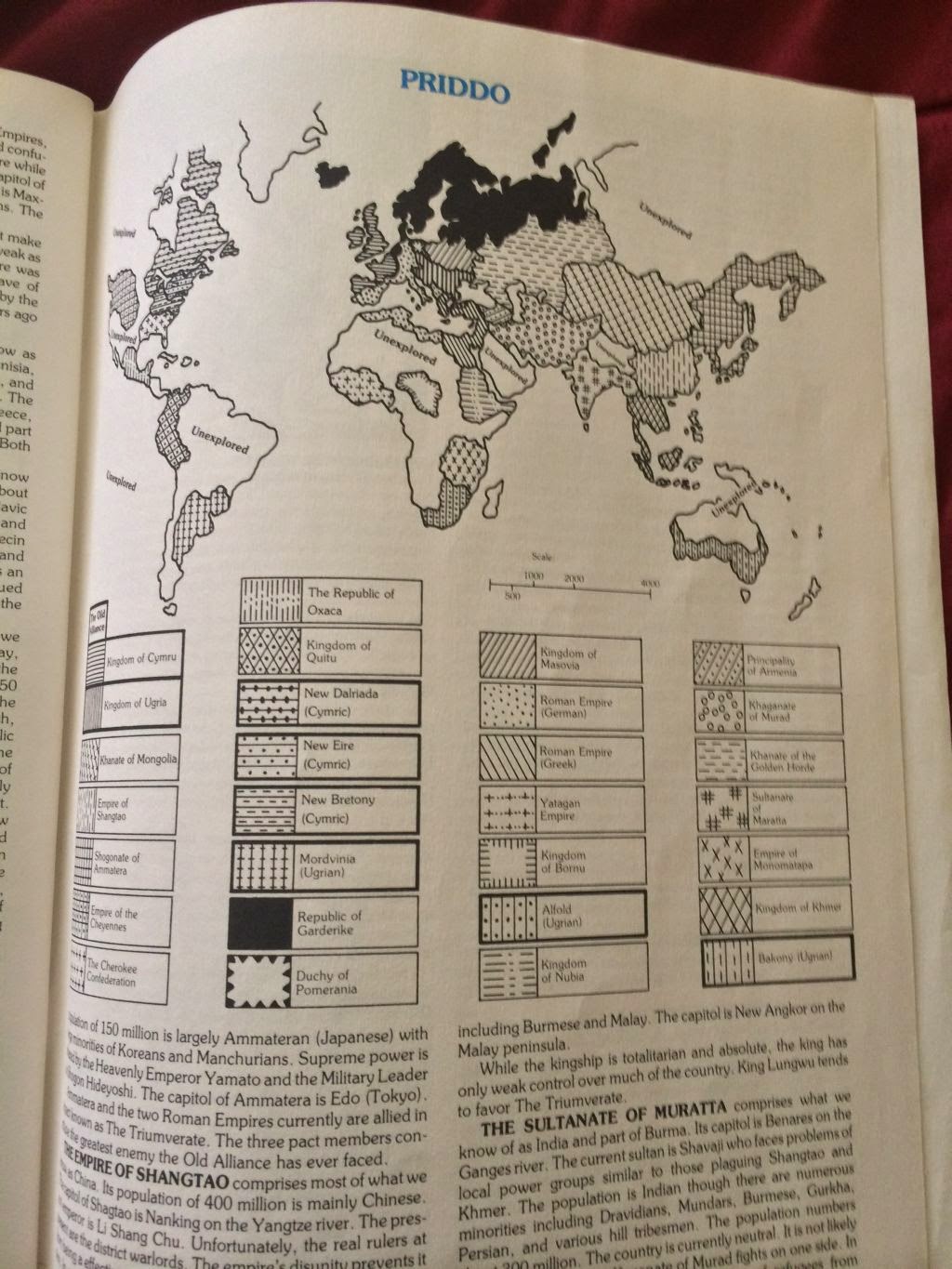 Priddo is the first steampunk world I can recall seeing in a gaming product. It's described with a fairly detailed history and as having a 19th century level of technology where "scientific magic" is used, e.g. trains are pulled by steam engines but the engine is powered by a fire elemental instead of coal. Remember, this book is from 1984. I'm sure this was my first exposure to the concept, even if it is almost a cliche today.

I haven't discussed the three published adventures for it but they are excellent showcases of just how wild a campaign could get. The first one begins with a murder mystery at a game convention, and ends up with characters running for their lives from killer robots on an island in the Bermuda Triangle. There are also sailing ships, dinosaurs, and some mythological figures involved as well.

With Tom Moldvay's involvement I'm surprised we don't see more about it in the OSR discussion universe, but it ranges pretty far from Basic D&D in concept and some mechanics, so there's not a ton of crossover utility. If you're at all interested in the branch of old school that mixes technology into its fantasy then you might like this game. Wrapping up this introductory post, Lords of Creation is mechanically simple game with a concept that fans of Sliders, John Carter, Dr. Who, and A Connecticut Yankee in King Arthur's Court could all find common ground. It's not a universal game, and it's not totally a kitchen-sink game. It has a fairly specific beginning premise (people from the modern world become aware of a larger universe)but is almost wide open after that. A particular campaign could focus on magical elements, sci-fi, dimensional wandering, or time travel in particular, or jump between them all. It is "weird" compared to most RPG campaigns I see being played, but at the least it could make a fun diversion from the ongoing D&D campaign.

I had not considered that but if I am ever going to experiment with running a game online, why not make it a weird one?