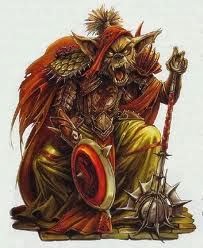 It is Flamerule 1450, outside Vraath Keep. 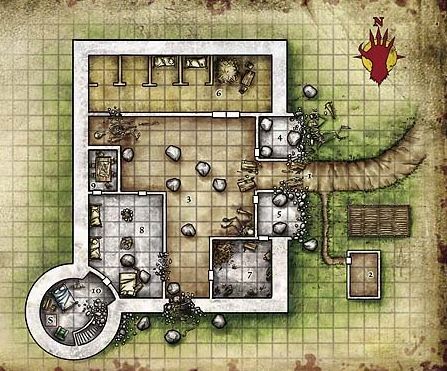 Observation has not revealed a ton of activity but there is some noise and the ranger sees multiple hobgoblin and wolf/worg tracks in set patterns, clearly patrolling the area. Seeing nothing that causes concern and not being a particularly stealthy group they decide to walk in the ruins of the front gate. As they do so an alarm sounds and a formation of hobgoblin infantry takes a position in front of the gate – a leader, two lieutenants, and ten warriors. Battlecries ring out on both sides and battle is joined!

Within seconds the hobgoblin captain is slain and the humanoids’ line breaks. As the survivors fight a desperate retreat one of the lieutenants sounds a whistle and a winged lion beast swoops into the fight from above. The manticore flings some spikes and adds an unexpected 3rd dimension to the fight.
The heroes are unstoppable though and gradually force their way into the keep. Soon enough the leaders are all down, the last warrior drops, and then the manticore is slain by a shot from the ranger. 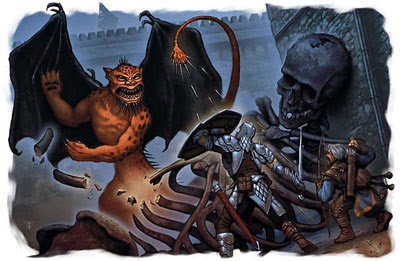 While some loot the bodies, others look around the interior of the keep. There’s not much left of the place. Noting a few giant skeletons around the ruins and numerous boulders and signs of impact it’s clear that hill giants played a role in the destruction of the fort. The dead hobgoblins all bear the symbol of the Red Hand, the same markings as the group that ambushed them on the way to Drellin’s Ferry.

Exploring further there is one largely intact structure remaining – and the door is barred.

Breaking down the door the party sees a single figure standing before them, weapons drawn. He tells them that he is Wyrmlord Koth, and having defeated his soldiers they can join him or die. Gravis presents his deed to the keep and informs Koth that he is the new lord of Vraath Keep and that he will need to answer some questions. Koth snarls and charges.

A vicious melee erupts in the room as Koth takes on an outraged warlord, a blood-hungry vampire, a motivated paladin, and a couple of dwarves looking for a “real” fight. Additionally the ranger stands across the room, calmly drawing and releasing his bow, never really in any immediate danger as he plants arrow after arrow into the Wyrmlord. He lands some mighty blows, but the numbers are against him and Zarra lands the final blow, tearing his head from his neck in an appropriately gory finish.

DM Notes: This was a fun session with the outdoor fight against the hobgoblins and the manticore. I should try to encourage more recon type activities but there was not a whole lot to learn other than those are the kinds of creatures camped in the keep now. I’m not sure what else the party was expecting to find out, and after one night of observation they got bored with it and attacked. They figured out the basics of the keep’s history pretty quickly. Then I hit a low spot as a DM.

The fight against Koth should have been a classic. Instead they find him alone and in a medium-sized room with no particularly interesting features other than some furniture. Once Team Beatdown surrounds him the fight is basically over – he has no way to push through them – bad monster design on my part – and as a solo he has no “encounter reset” abilities like a mass stun or summon or flight to give him a chance to reframe the fight on better terms for him. Instead it was just like a bad 3E fight – the melee characters close in and just pound the hit points out of him in a long boring number-crunching fight. Not every encounter has to be the opening sequence to an Indiana Jones movie, but this one could have been a lot better, especially considering the tools 4E gives you to liven up things up. 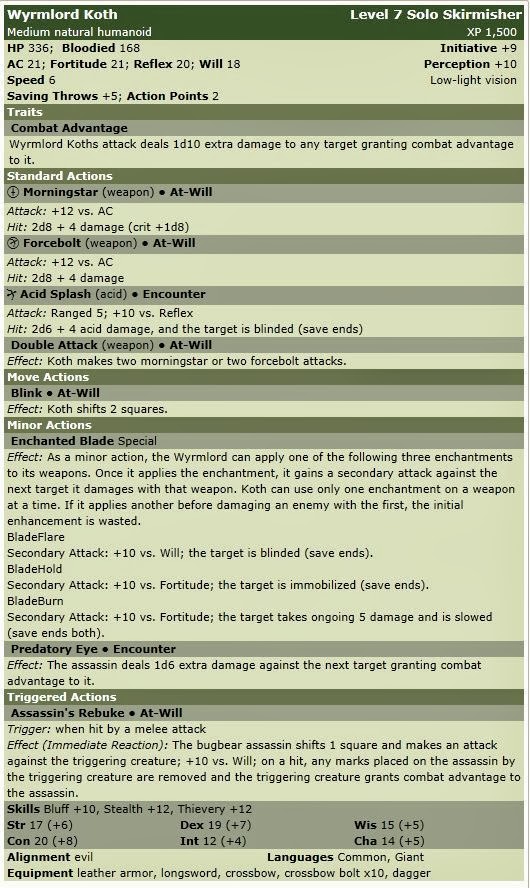 Here's his statblock for those of you who might be interested. He's pretty much a solo'd bugbear assassin. I like to adapt existing monsters as much as possible and this fit him pretty well - other than the lack of abilities mentioned above. Hopefully I will do better next time.