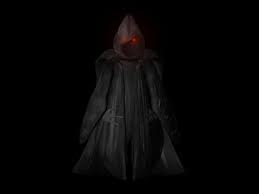 We begin in the feasting hall of the Cairn of the Winter King, or what appeared to be a feasting hall anyway. Having dispatched the inhabitants the party now searches the room and opens doors, looking for loot and a way forward. There are two doors leading out.

Exploring the corridor behind one door, they come to a locked double door with a sign on it - "Do not open on pain of death by order of the Winter King" - and for the first time ever in the entire history of D&D they do not open the door that has a sign that says not to open it!

Moving further inward they find another set of double doors around a corner, fiddle with the locks.  As they work on this a ghostly figure manifests partway through the door, gesturing and silently saying something. The party backs off, watches for a bit, decides they are not in immediate danger, and ponders. The "drow" tries to pick the lock and is blasted in the face with magical frost for her efforts*.  The spirit appears to be a dwarf. The two dwarfs in the party confer and agree that he is mouthing the words "ice" and "key" in the dwarf tongue. Clearly a quest item! With renewed purpose the party moves back through the dungeon.

The group follows a new direction and comes to an empty banquet hall. They hear some noises coming from farther on, but decide to take the "quiet" exit out of the place, ending up back in the feasting hall they began in. Apparently the two exits from the room make an "H" and they will have to explore the farther ends of the "H" to find the keys and the King himself. 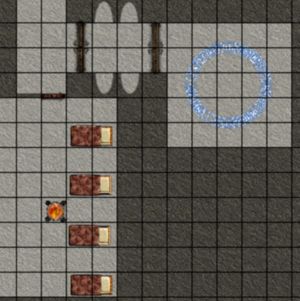 Deciding to take a more methodical approach they head back to the first door, the one with the sign on it. They smash it down, proceed inward, and briefly note a frosty room with a runic circle of some kind on the floor - then they are attacked by babbling wraith-like creatures! An ugly close-quarters fight breaks out where the Paladin takes a beating but dishes out some massive blows, the Vampire devastates one, and even  Marko the halfling manages to strike out at the undead things.Finally the wraiths are destroyed and the party pauses to explore and catch their breath. The circle is a teleportation circle, apparently a receive-only type. Interesting, but useless to the group right now. Feeling better, they prepare to move down the hall.

A short way down the hall our heroes discover another door and after a listen and a search they take the traditional approach and smash it down, revealing a laboratory. Poking around the delicate glassware they discover some potions and tuck them away for later.

Exploring a bit further, the team discovers a huge room full of frozen figures, lined up like they are organized for some reason. Among them is a white dragon, hanging from the ceiling ... and around his neck is a key made of ice. There is clearly some thawing going on but the party goes straight for the key, grabbing it and heading for the ghost-door from earlier. Everyone that is but the Paladin, who notices that one of the nearer figures has a really nice sword. He tries to be gentle but the figure is frozen so there's really only one way this is going to go - SNAP! As he examines the sword he hears a noise ... and realizes the dragon is stirring. He runs out of the room to where the party has gathered in front of the door and mentions that they may have company in just a minute ...

DM Notes: This was still a "getting organized" type session in some ways as there was a lot of indecision on how to explore the dungeon. I was shocked that they walked away from the sign-door but they did come back to it eventually, restoring balance to the universe. They passed several other doors too, listening and looking them over, then moving on past, which was a little odd as not many groups have operated that way in my experience. Even in the banquet hall there were several passages leading out and some noises to investigate, but they circled back around to known territory instead. The ghost dwarf and the hint about the keys seemed to fire them up and things got organized after that.

There was only one combat this time and it was fun for the DM though perhaps not as much for the players. Behind the door is a short hall of 10' by 15' and then a larger 25' by 25' room. The wraiths are insubstantial and can move in and out of the stone while the PC"s can be pinned in a very tight area. The wraiths also have an Aura 3 that does damage and lets them slide characters 2 squares, enabling them to bottle up the PC's in that small area if they choose to do so. They also have powers that lower defenses and another that lets them force the target to attack an ally - lots of fun for the DM as I love those hit-your-buddy-powers, but the characters took a pretty good beating.

*This spurred a whole conversation about how vampires should be immune to cold, in her view. A discussion which has never really gone away. It came up just this past weekend, nearly a year later, as she takes damage from a dragonborn's icy breath - "I still think they should be immune" and the occasional snide comment from one of the other players as I rattle off the damage - "oh but you're immune to that". It's funny. Most of the time.

Oh, and the sword was a +2 Frostbrand, so Dar was a pretty happy paladin - until he realized the next big enemy was a White Dragon.

Do you feel the lack of a controller is a hindrance to them? I could see a mob (rather than a Solo like a white dragon) making life difficult.

I thought it might but the warlord is such a crazy force multiplier that they blow through hordes almost as fast as they do more elite opposition.

Later on I do discover the one thing they have trouble with. A controller would have helped in that scenario but in these early adventures it didn't seem like a big loss.

Our main problem is a complete lack of ranged attacks. When the ranger isn't available, which is often as the campaign continues, we're all melee.

When that happens artillery crushes us, anything with AE flattens us, and oh man do we have terrible Will defenses.

We're really a very sub-optimal composition in a lot of ways. But we swing a mean surfboard (as many times per round as we can).