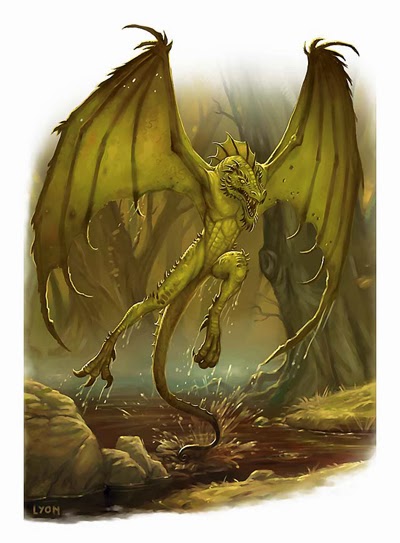 Our Heroes (now 7th level):
We open at the now-defunct fort/tollgate constructed by the Red Hand on the Old North Road. Presumably this was part of their invasion plans, but the party isn't sure what role it was to play.

(Also, my players had a heck of a time remembering some of the details from the previous session. This is odd, because we only had the usual two-week gap here but they were pretty fuzzy about some of the decisions/findings/conclusions from last time. We got it all sorted out and moved on.)

Having learned something of the local lore while in Drellin's Ferry the party knows that the ancient city of Rhest was the center of some long-lost realm that was destroyed before the war captain Imphras founded Impiltur in 1095 DR. Now it is a ruin in the middle of the Blackfens. This seems the most likely place to find this "Saarvith" noted on the captured map. With the ranger leading the way, they head into the marsh.

After a few hours the ranger notices an unusual set of tracks and the party notices a hill with some trees (it's been pretty sparse so far) rising out of the muck. They approach cautiously and soon spot a giant owl, dead (recently killed) at the base of one of the trees. Deciding to investigate they draw the attention of a large green draconic beast that stands up, hissing as they approach. The paladin moves to stand between it and the party and as he does so the thing charges.

Sir Abel and the dragonspawn clash, sword and shield against blade-like wings and acid spit. The ranger begins firing on the creature as well. Quickly, a second beast rises out of the murky water an charges the vampire, who is all too ready to mix it up blade-to-claw. The warlord and friend move in to help as does the warden but Zarra takes a serious beating from the second dragonspawn. Sir Abel is also in bad shape, bearing the brunt of the beast's blows on his side of the battle. He calls upon the power of Torm and manages to finish the thing off in a flurry of blows. Gravis rallies Zarra enough to let her loose one last burst of fury that rips the other beast apart, then uses its essence to heal her wounds.

After the battle, the group's best guess is that these monsters are some kind of mutated green dragon and that they are not native to the area. Investigating the dead owl it looks like a pet or companion and based on the clues they end up cutting the greenspawn open to see if there's any sign of the owner. They find nothing recognizable other than a ring. Some other gear scattered around the area (along with other scattered remains) does prove to be useful and some of it even magical.

As they gather up these things and search the area an elf riding on the back of another giant owl drops down out of the sky and holds them at swordpoint, demanding to know what they are doing in the marsh and how that other owl ended up dead. The party explains and Killiar Arrowswift relents enough to realize they did not kill the owl or his missing friend, Lanikar. As more elves and owls descend, the leader decides to take the whole party back to their village to try and make sense of what happened. The team agrees. 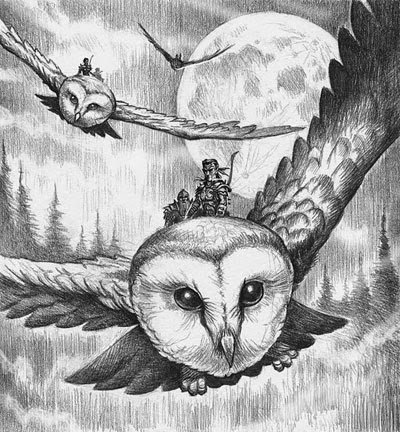 Our heroes are led to Starsong Hill, the largest encampment of the Tiri-Kotor elves, a rustic group who dwell in the Blackfens. This is a large area of solid ground, heavily wooded, and topped by the hill it was named for. Lit by lanterns, many elves appear to live in tents on the ground though there are some larger constructs in the trees. As the patrol splits up, Killiar takes the newcomers to meet the leaders of the tribe and to share the hard news that one of their own was killed. The party does well in these meetings and is invited to watch the funeral for Lanikar the next day.

DM Notes: Another multifaceted session with some thinking by the players (both in and out of character), a fight, and interaction with some unexpected allies. Having a pair of nature-oriented characters like the ranger and the warden is a real help in this adventure as there has been a lot of cross-country travel, tracking, and just dealing with the wilderness. Having two means the game is unlikely to get bogged down in basic travel/survival issues.

The fight was with a pair of Greenspawn Razorfangs, down-leveled to be a decent challenge: 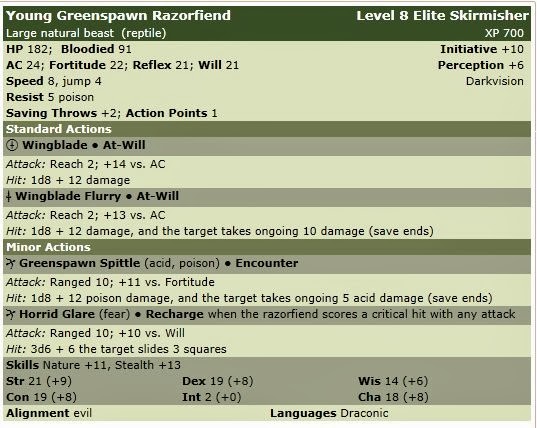 Magic Items here were filling in some lower level gaps so lots of utility if nothing spectacular: Iron Armbands of Power (lv6), Boots of the Fencing Master (lv7), Amulet of Physical Resolve (lv7), Flagon of Ale Procurement (lv5), Bag of Holding (lv5)

The interaction with the elves was a skill challenge drawn out over several locations and with multiple parts.

This is a Skill Challenge to successfully work things out with the Tiri Kotor elves.
Complexity 5, Level 7 – Moderate = DC 16, Hard = DC 23

Stage 1 is convincing Killiar (Ranger) that the PC's are friendly – 3 Moderate, 1 Hard


They did very well with this one and set things up well for the future. This was a part of painting the picture of the Vale as not just being full of monsters and farmers but keeping some of the "fantasy" alive in it for the good guys too. I will admit that when I first read it elves living in a marsh riding giant owls did not impress me. They come across as a flavor of "wood elf" and I seriously considered making them much more barbaric "wild elf" from old school Greyhawk lore. I ended up not doing it, mostly because they are just not remote enough to justify it. As I spent more time with them I came around on the original description and decided it was OK. Hopefully the players did too.
Posted by Blacksteel at 1:22 PM

Silly as it sounds, I was too wrapped up in their name (they are knights of the old republic?) and Zarra doing everything she could to keep the ring to equate the oddity of swamp elves riding owls to anything. My recollection of them was just like Iroquois living in wigwams, at least that was the mental image my brain insists on clinging to.

The name bugged me too but at least it's easy to remember.

And the vamp was pretty attached to that ring. I believe "finders keepers" was uttered at least once during that little "negotiation".