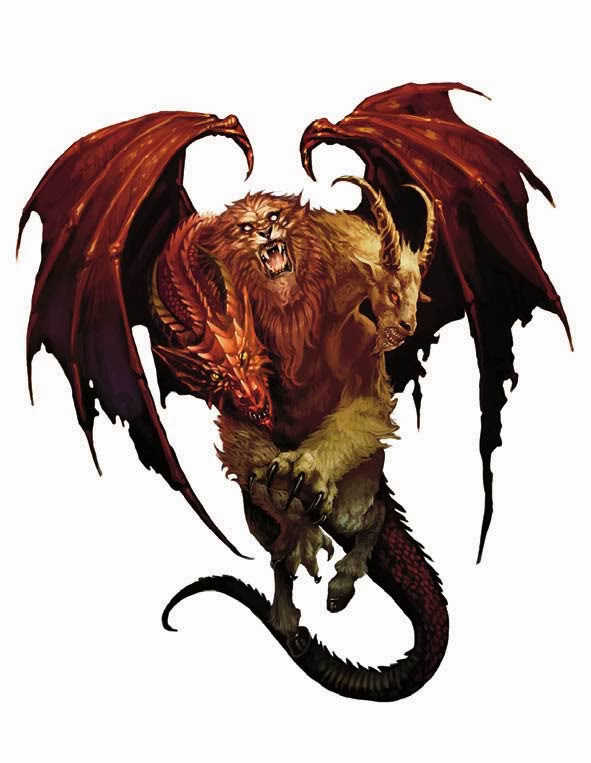 Our Heroes (6th level):
We begin on the outskirts of Drellin's Ferry, where the team has returned with news of an invasion only to find the village under some kind of attack...

Somewhat dismayed by the smoke rising over their safe haven, the party rests briefly and then pushes on into the burning section of the village. As they move in they hear some unusual noises, then finally confront the source of the fires - a chimera! Concerned about taking on a beast like that, but unwilling to let it burn its way through the entire town our heroes move in - Gravis shouting commands, Gartok calling on the spirits of the earth, Sir Primies chanting the battle hymns of Torm, Zarra showing her fangs, and the elf silently drawing his bow.

There is, of course, a breath weapon in play here and despite their best efforts it does catch a few of our heroes but they press on. The ranger is fairly safe at his firing position but the rest of the party is under heavy threat as each of the thing's heads is a vicious opponent up close. Quickly, although they are inflicting some harm, Zarra is down and in bad shape. In response the paladin calls out and strikes with a radiant blade, infused with the divine. The blow lands but brings mixed results as the dragon head responds with another blast of fire The warden summons his strongest spirits, taking blow after blow to almost no effect while the warlord tries to think of a plan to salvage this situation. In a brutal half-minute of redoubled action, the swords, arrows, and hammer of the heroes put an end to the beast right there in the western village square, though they take a serious beating to do so - except for the bow ranger. Sometimes, there's no secret weapon other than force against force. The vampire is saved, but as her wounds heal her pride does not and she is in a furious bloodlust, looking to avenge her fall. 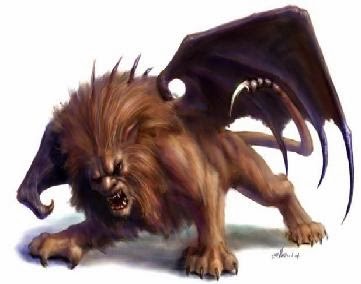 Fortunately a pair of winged shapes sweep over the rooftops and the riders on their back throw javelins as the leonine forms fling tail spikes - Manticores! With goblins riding on their backs! The vampire however has very few ways to attack an airborne target, pushing her rage even further! In fact the entire party (other than No-Name) is having some difficulty reaching these airborne enemies but eventually one of the riders becomes a little too confident and swoops in for close combat. With an evil, anticipatory grin she tears into the manticore who is going nowhere now. Gravis leads Ivan into melee as well and the owlbear lands a telling blow The rider is knocked off of his mount and rather quickly slain, even as the other rider drops in to try and extricate him. In a tremendous terrestrial tussle both riders and the first manticore are killed. The second manticore struggles out of this furious furball and flies off, wounded repeatedly by the bow ranger. The creature finally passes out of range. As the elf finally lowers his bow, Gravis, Gartok, and Abel realize they still have news to deliver, and the vampire wipes the blood from her lips - and smiles. 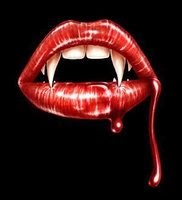 DM Notes: This was a combat-heavy session and it was a lot of fun. I dug out the old Mordheim buildings for some 3D terrain and spent a little more time on the map. I thought I had some pictures of the fight but I cannot find them.

A chimera, manticores, goblins, and hobgoblins are all part of the forces that can attack the village depending on what the players do and how much time they take. I wanted to keep the flavor true to the source so that's what appeared here, adjusted to fit 4E's encounter system.

The chimera fight was tough - a level 9 solo going against a 5-man party of level 6 characters. They beat it in 5 rounds (with one casualty) but it was a fairly tense 5 rounds. The vampire was hit in each of the first 3 rounds and was down and dying in round 4 - even with marking it's hard to lock down something with 3 heads. A party member dropping is usually the signal to take it up a notch and as powers were fired off the warden hit AC34 at one point and that's a tall order even for a chimera.

The manticores & riders fight went 10 rounds, mainly due to the party's lesser abilities in ranged combat - at least compared to their melee prowess. Early on the vampire landed a 45 point hit, somewhat making up for her KO in the last fight. The bow ranger burned an action point to finish off one target and managed to miss with both shots from a twin strike but yet another attack from the warlord finally let him grab some glory.

This fight is one where a controller could have made a big difference. Partly because they usually have a fair amount of ranged capability, and partly because they might have been able to tangle up or knock down the flying targets to get them in range of the meat grinders. The bow ranger is a very potent ranged combatant, but when he's (effectively) the only one making attacks compared to all 5 when in melee, well, it's not great.

Regardless, it was a successful defense against aerial scouts and raiders from the Red Hand and set up the next session quite well.