Over the last month I have acquired just about all of the parts I need for my Dark Angels army. That's a new thing for me - I tend to start small, building and painting and playing as I go and building an army up over years. For this one while I sort of started out with the Dark Vengeance set in the fall of 2012 I never really had a desire or a vision of a full DA army until the end of 2013. Once I knew what I wanted to do with it, I decided to go ahead and put it together all at once.

So, a month into this, how does it look? 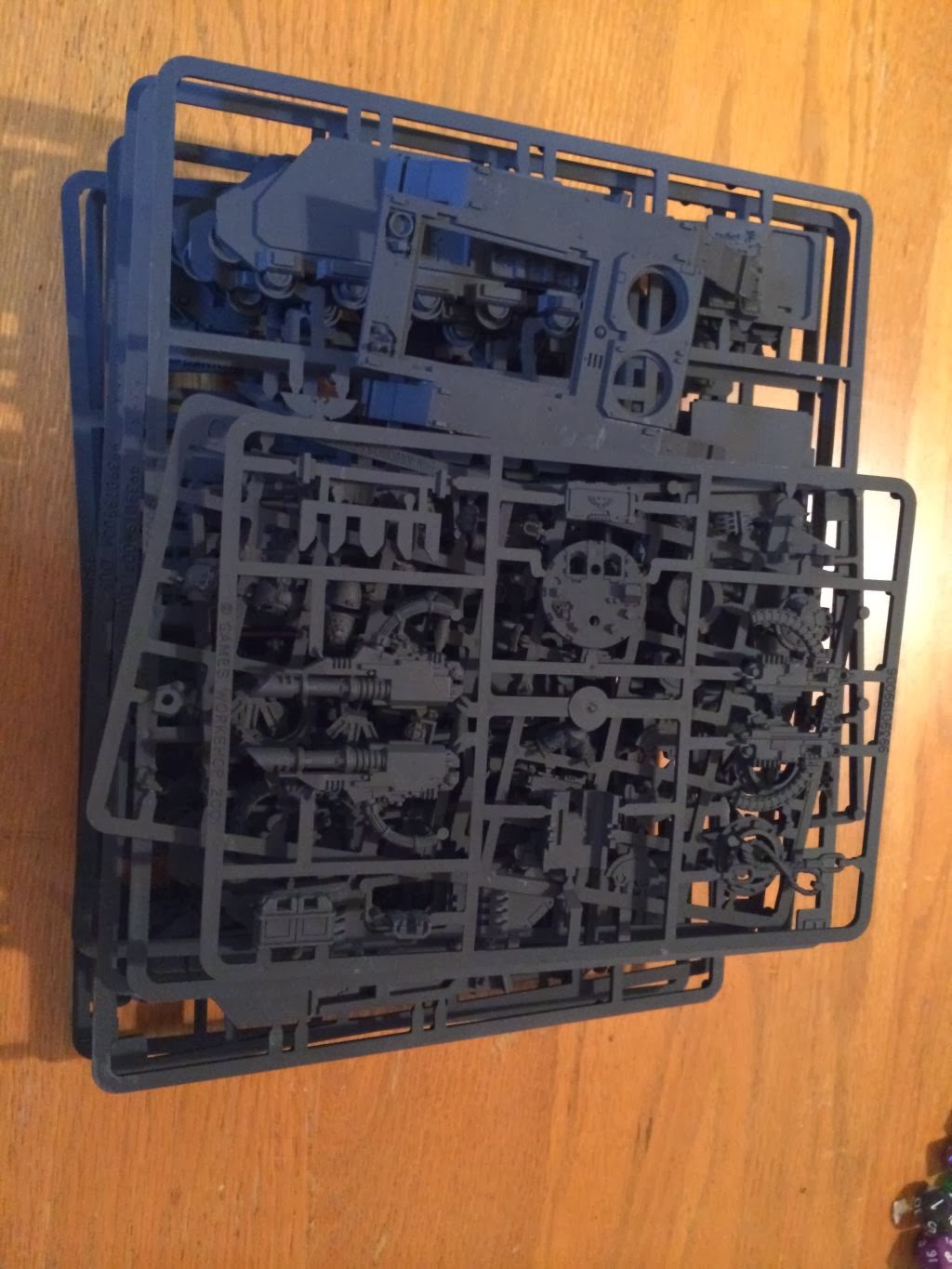 Well, everything is basecoated in a nice flat black. That pile includes a razorback and two rhinos. Yes I spray coat things still on the sprue - it's easier in some situations. 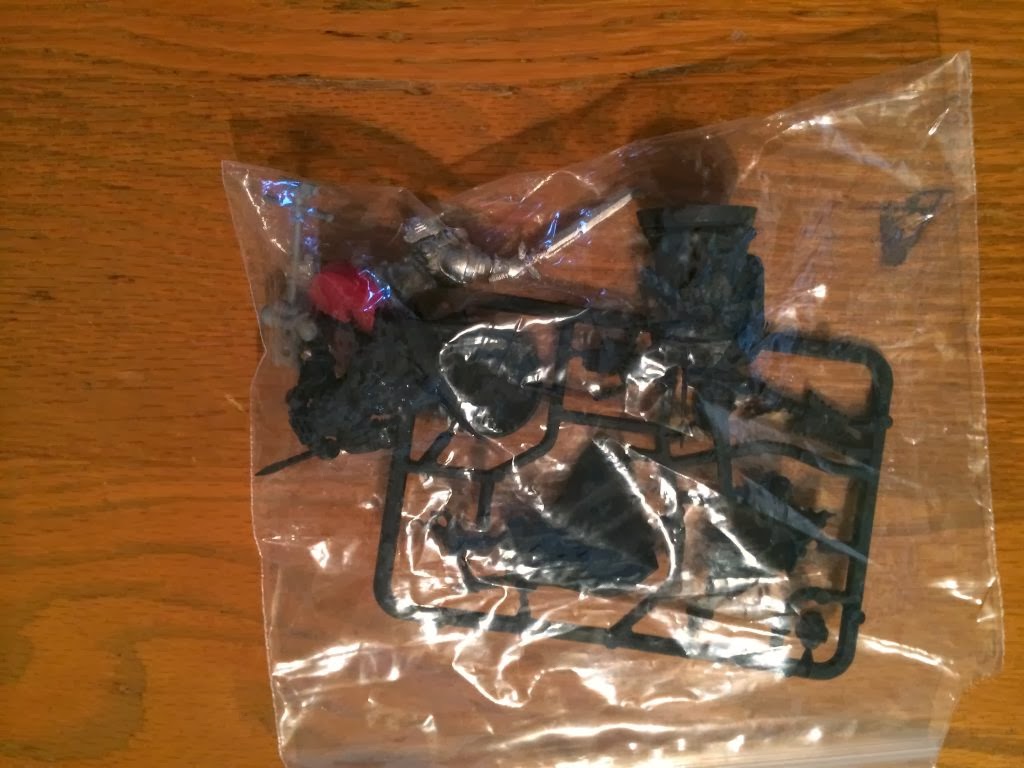 HQs are still in their baggy. Work on them comes later. I need to get the paint scheme completely finalized before I finish them. 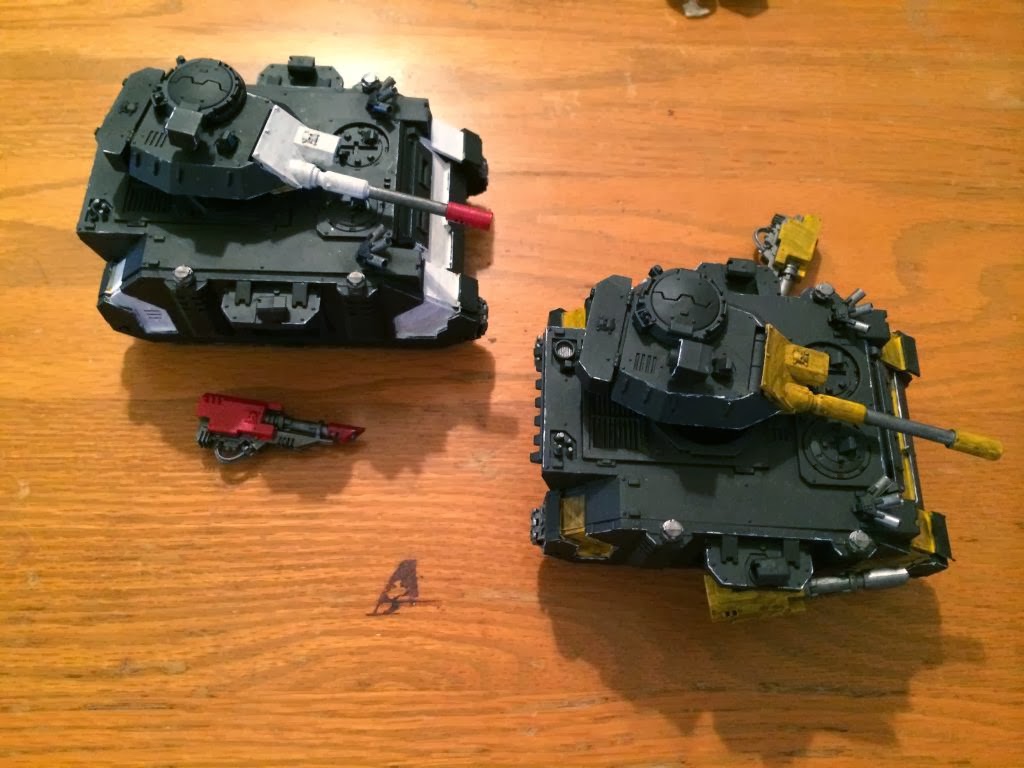 Predators actually were painted with some yellow when I acquired them. I am carefully converting them to something that matches this army. Still experimenting a little here as it's going to take some false starts to get the exact mix of red and white details that I think looks good. Not there yet. 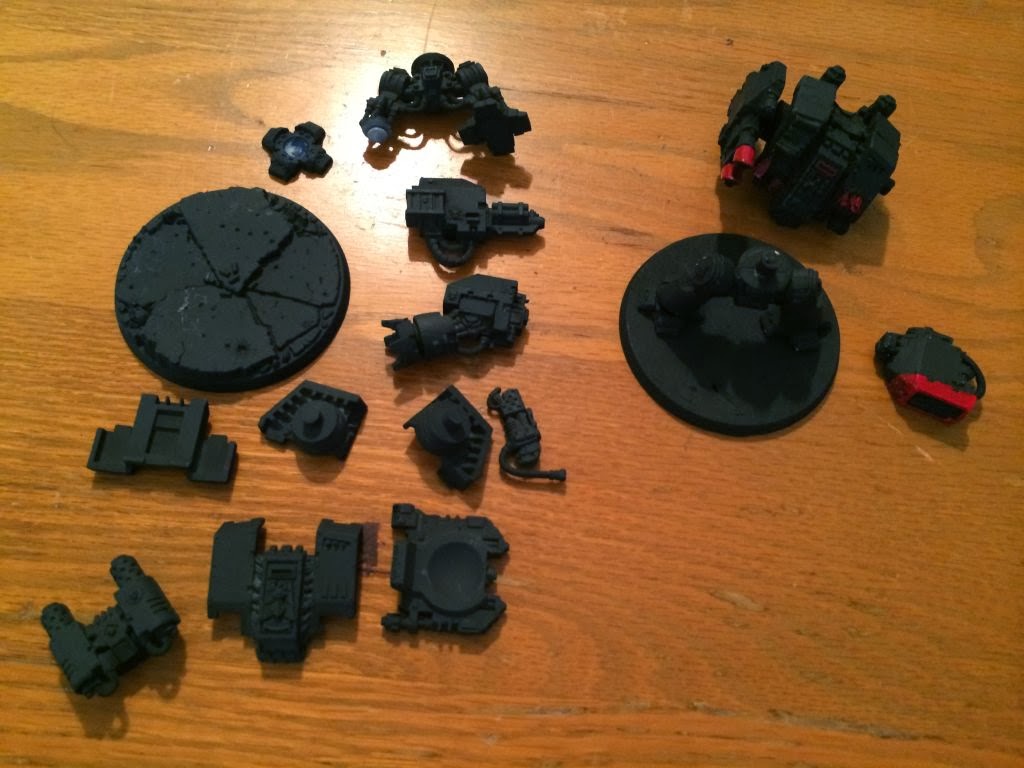 I'm still experimenting with the dreadnoughts too but they tend to be easier for me as they mostly follow the infantry paint scheme. That's one classic metal "Dark Angels Dreadnought" - first Hellfire type - and one current plastic version that's probably going for the classic assault cannon + powerfist combo. 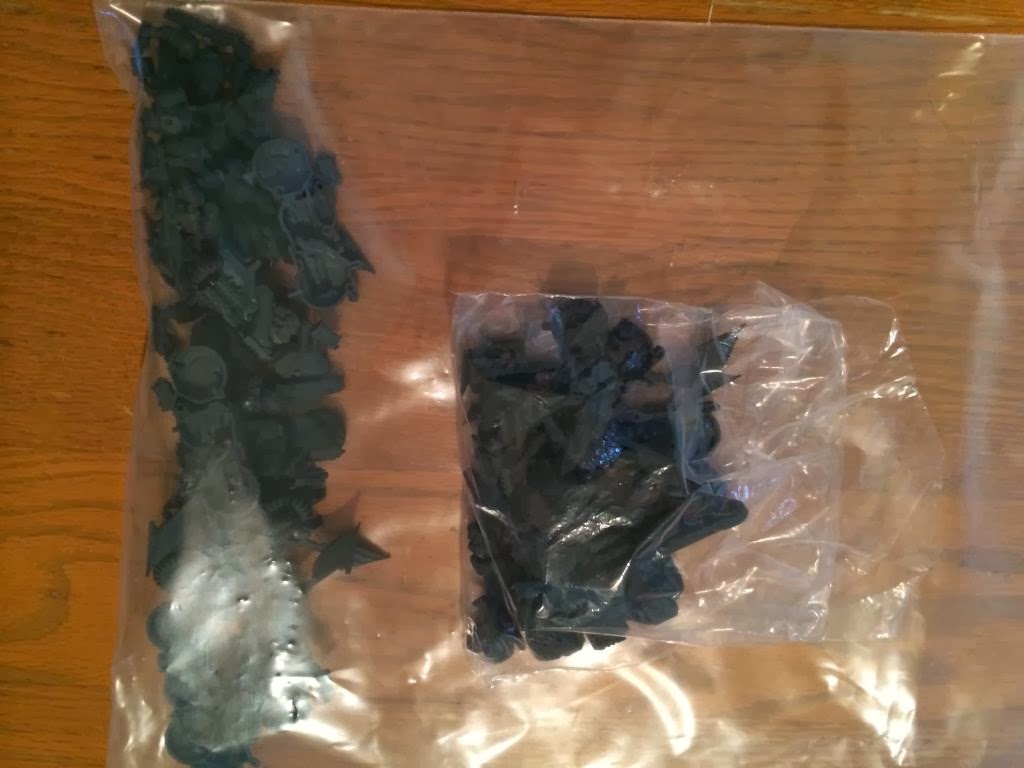 That's two ravenwing bike squads in bags. Basecoated, saving for later. THinking about getting a command squad for them too for a more bike-heavy version of this army. 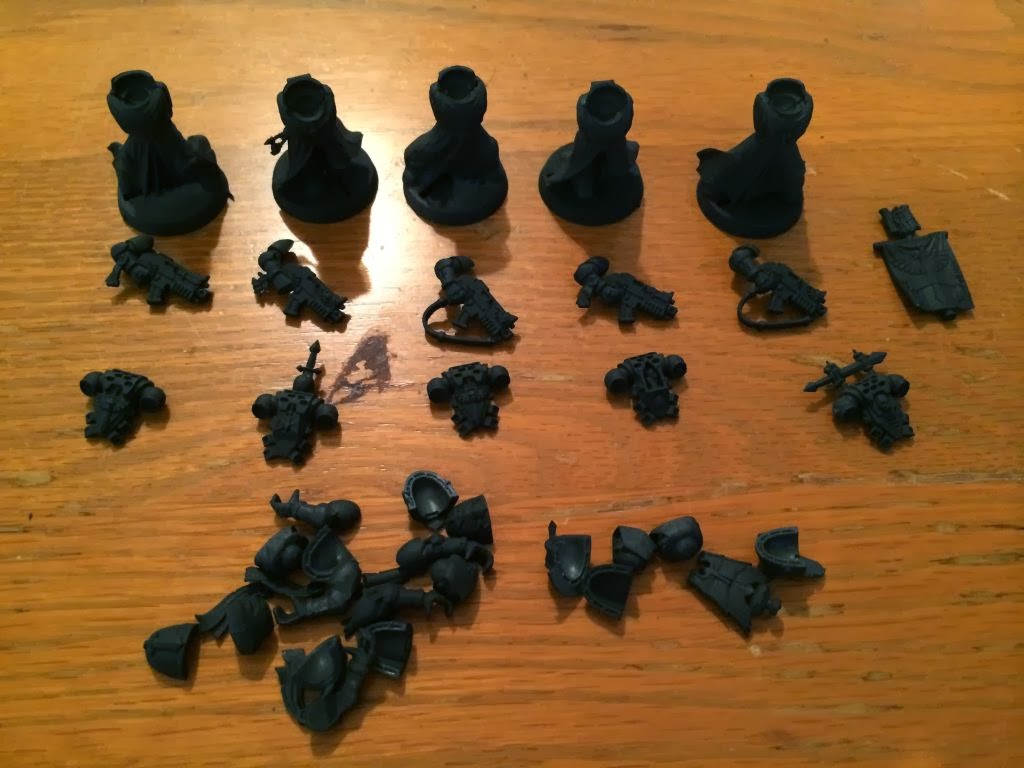 Command squad! These guys will be carrying the banner of devastation and are a key part of my infantry force. I am still trying to decide on whether I need to make one of them a medic - a few more points, but it does give the squad Feel No Pain. To keep the banner alive it's probably worth it but I may have to make him an extra figure. No special gear for these guys, just bolters. While their 2 attacks make it tempting to load them up with power weapons and stormshields it would make them stupidly expensive. That banner makes bolters pretty special and that needs to be the focus. They will be riding in the razorback. 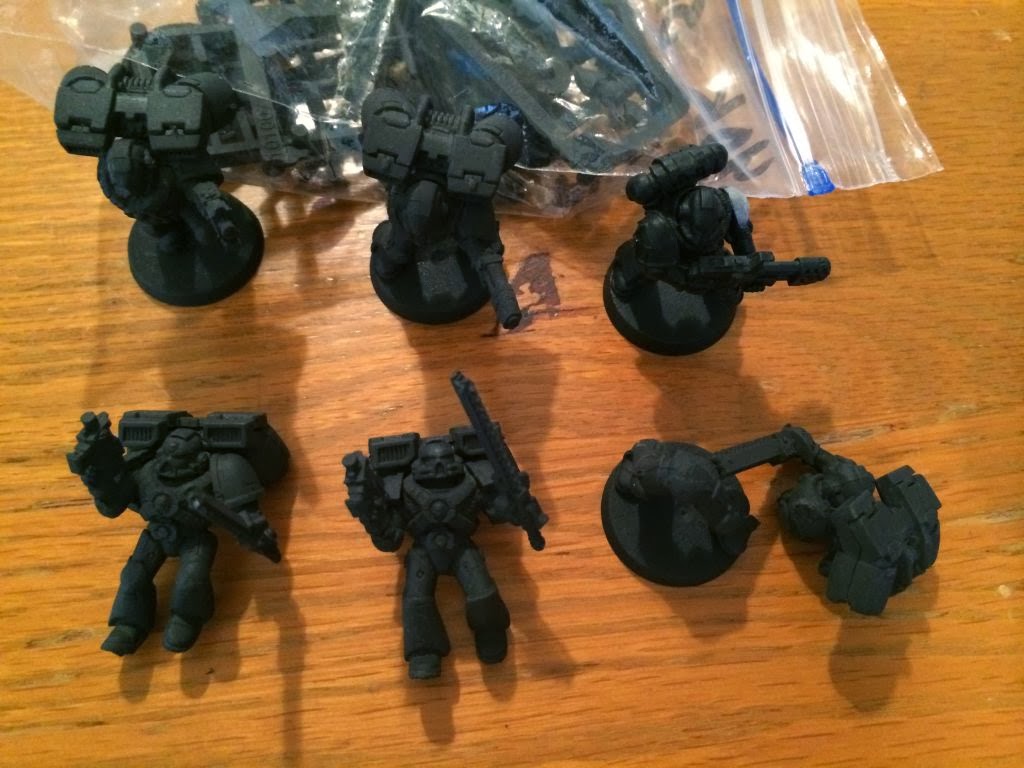 The harassment/trolling assault squad. Five guys, two flamers, melta bombs and krak grenades - look out cheap objective holders and lonely vehicles. While I don't think of Dark Angels as an assault force, I'm not really planning to use these guys as a typical assault squad. 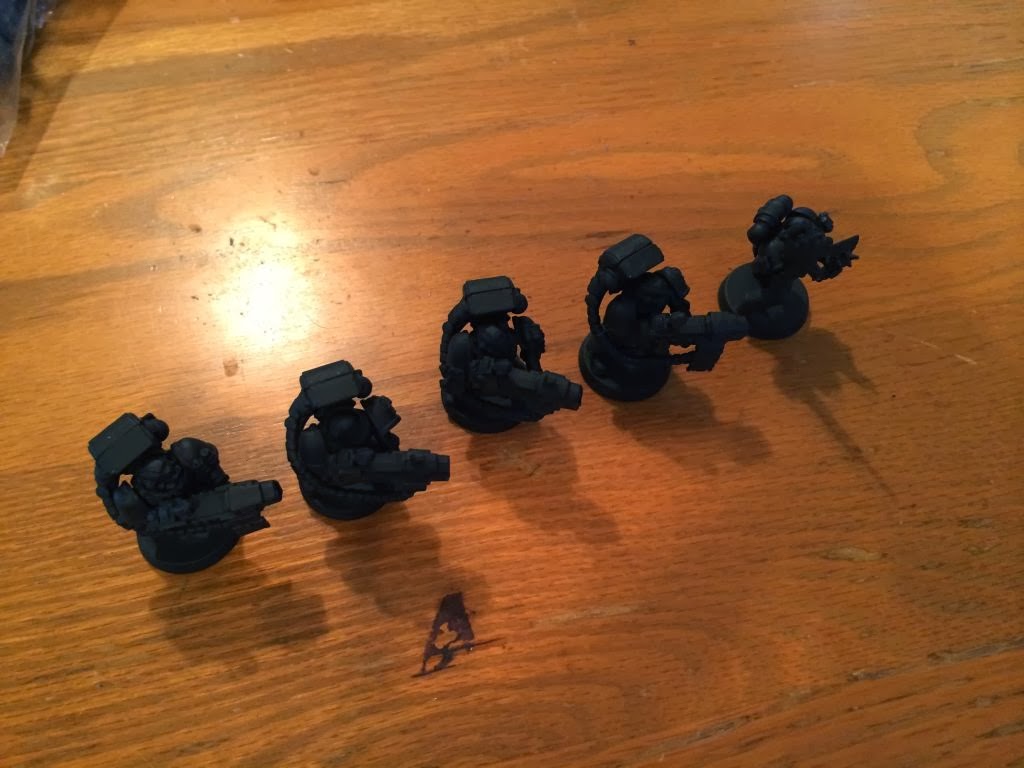 The all-plasma devastator squad. Yes it may be overkill, and yes, the odds are one of them will blow himself up during a typical game, but this is a plasma-themed army. Plus they make people nervous, which is good. 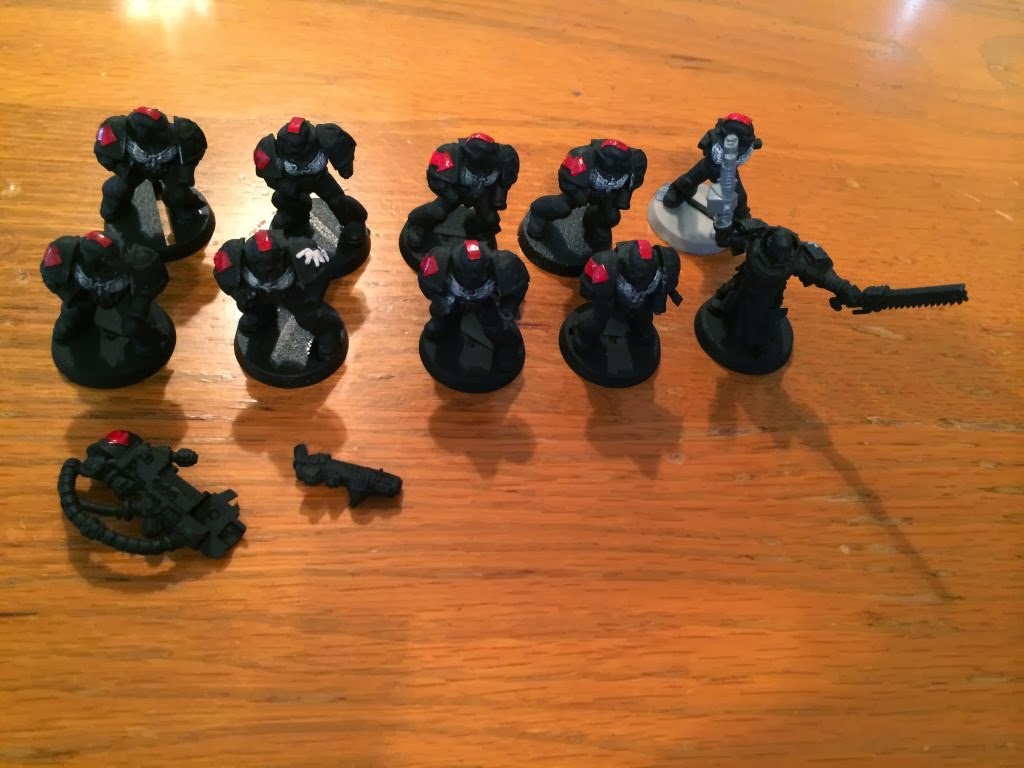 Tac squad number one - this is where most of my attention is going right now. The two tac squads along with the command squad make up the core of my initial force. Two rhinos and the razorback move up, dump out the troops, who then start unloading on anything in range with quadruple-normal bolter fire.

The main challenge is getting the basic paint scheme right - everything else in the army will be a variation of what goes here. The red helmet top is almost too mohawk-like but it looks alright on the table. The unit type insignia on the right is red, the chapter insignia on the left is white, the chest eagle is white, and the weapon will be largely silver. Right now I think the robes will be white/off white but I'm not sure - have to see how it looks with the rest of the scheme. 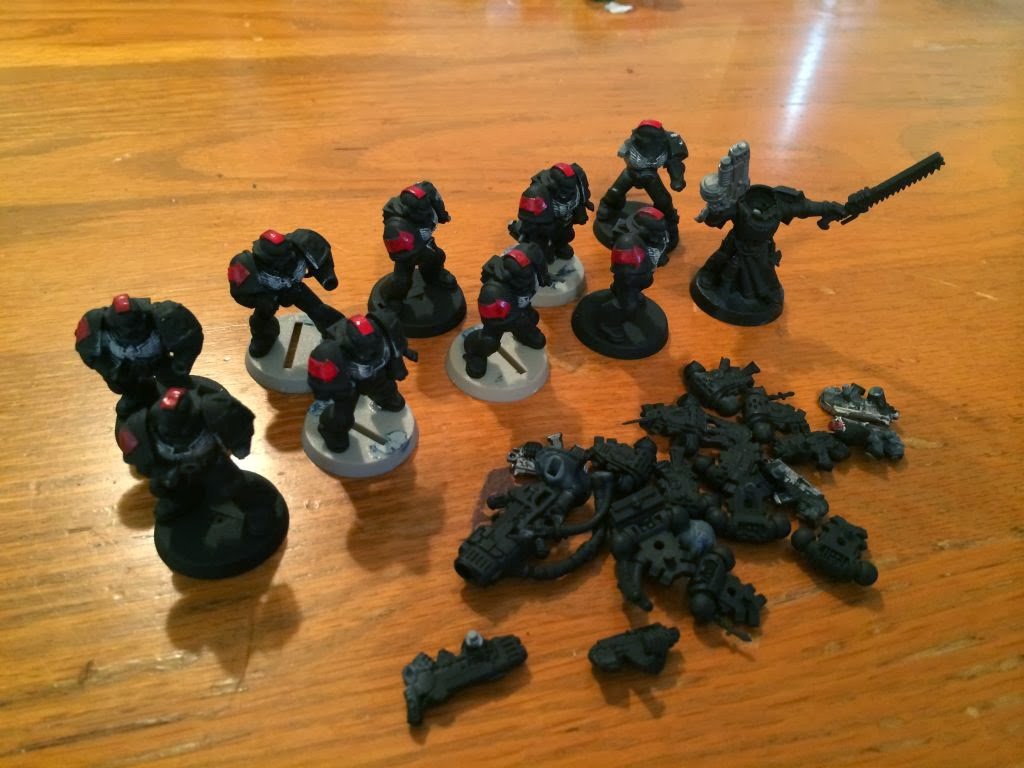 The other issue is the visually cool but tactically stupid weapon choice on the sergeants. The DA codex has sergeants starting with a bolt gun and a bolt pistol. That makes perfect sense for a squad whose main job is shooting things. In the Dark Vengeance tac squad the sergeant comes with a plasma pistol and a chain sword! To do this he has traded in both of his starting weapons for two shorter-ranged weapons and paid 15 points for the privilege! That's terrible! He's now an assault sergeant in a shooting squad - and he's not particularly effective in HTH! A power weapon I could understand, but the plasma pistol is the single most overpriced weapon upgrade in the game and all it does in close combat is open up the two-melee-weapon bonus attack - for 15 points on a one-wound model!

That configuration was just not going to work for me. Getting rid of the bolter in a squad I intend to park next to the banner of devastation is not going to happen, but it would be nice to have another special shot in the squad. So I picked up some combi-weapons and started cutting. I agonized over choices here and ended up going with "more plasma". The flamer is nice defensively but I'll take a 4-shot bolter (or specialty shots) if I get charged and I just don't see this squad making an assault, limiting the flamer's usefulness. I seriously considered melta but it's only 1 short-ranged shot, it's really only contributing against vehicles, and I don't want to rely on a single shot in those situations. I like stormbolters but they don't qualify for the banner bonus so they were out. So, comi-plasma it was and it keeps the "plasma plasma plasma" theme of the army alive too.

I went ahead and kept the chainsword - it does look cool.

That's where things stand now. I also have a land raider crusader and some deathwing knights on the way - more about those next time.
Posted by Blacksteel at 6:00 PM