K is for: Karl Bloodaxe

I had played Warahammer Fantasy for several years before the Warhammer Fantasy RPG came out, and I was very excited when it did. It was a completely different look and feel from AD&D and it was very different mechanically as well. One of my friends decided to run it and so we all made up characters and he ran each of us through the starting adventure in the back of the book, "The Oldenhaller Contract" , in separate sessions with some slight variations to kick off our campaign. It was a blast and we played that campaign in between our regular AD&D runs and other games for around 3 years. 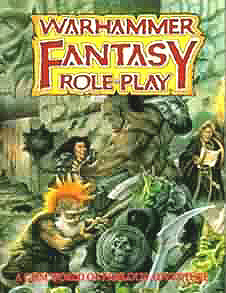 The first character I made for WFRP was a human outlaw I named Karl Bloodaxe. Race and career were your main choices when starting a character back then (and you were supposed to roll for both but out GM let us roll twice and choose what we wanted) and Outlaw looked like a pretty good one. There were also Advanced Careers which were a little like Prestige classes in 3E D&D only 14 years earlier. The Advanced career I chose was "Outlaw Chief" which as you can imagine built on the preceding career quite nicely. That's as far as he got though, we didn't play long enough to exhaust all of the advancement  possibilities of that second career. I gave him a sort of barbarian look and attitude assuming that he had been raised in the wilder areas of the Empire and preferring to live out in those wilder areas most of the time. He was also based on this mini that I painted up specifically to be him. 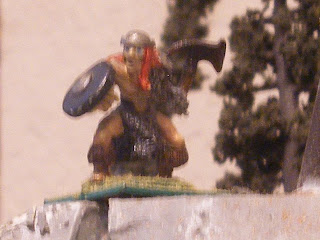 It's one of the few times I have painted up a miniature wit h a specific character in mind. I've only used it a few times since, as it's pretty solidly linked to Karl in my mind. I'm pretty sure I had his character sheet up until at least a few years ago but I can't find it now. I suppose it makes sense that the metal miniature would outlast the paper character sheet but that hasn't always been the case with my characters. 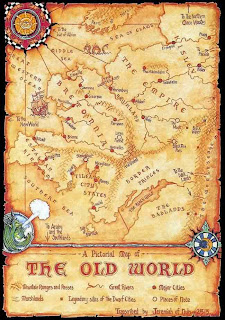 Inspiration for a character can come from many places (as I'm trying to demonstrate in this month's posts)  and more than one of mine have come from specific miniatures. Typically this happens after I've already painted it and it's resting in a case somewhere. When I start looking at the world and the rules for a new campaign sometimes I think "ooh, I could finally make THAT GUY" and attach a definite personality and skill set to a particular mini. In this case I had bought a pack of 3 barbarian miniatures from some company I don't remember thinking that I needed some mini's for D&D berserkers, which are a fairly common low-level opponent in Basic D&D. Before I did anything with them the whole WFRP campaign thing came up and I rolled up my outlaw and remembered the mini and suddenly a few lines of description and eventually a fair amount of background detail sprung into my head over the next few hours. I got out the brushes at the next opportunity and painted him up the way I saw him and it came out fairly well. That was about 24 years ago (it came out in 86 and I think we started up in 87 and while it's not my best paint job (that was still early in my painting career) it's held up despite handling, moves, and an apartment fire years ago. Looking at the miniature itself I have no idea why that particular miniature clicked for me as that particular character. It's not a particularly distinctive barbarian, though I do like the posing and the stance of him - he looks like he's wary, and about to really lay into someone. Most people that hear medieval outlaw would think of a more Robin Hood style figure but that never even occurred to me in this case. This particular combination of mechanics, look, and personality just clicked for me. 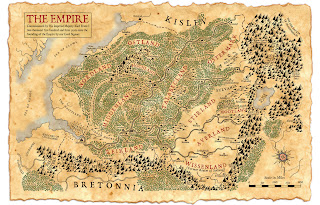 A few years later I made a version of him for a GURPS fantasy game set in a very warhammrish world (grimdark fantasy with early gunpowder weapons) and it was fun. I went more barbarian in that version but he still worked and some of the personality traits had some mechanical benefits as well. Alas I can't find that sheet either. 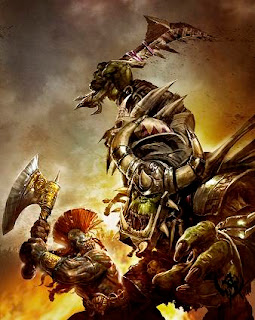 So for now I'm going to leave this as a sheet-less and stat-less entry. If I find it I will update this entry and I have an idea on how to update him later this month for another system which could be fun. I'm writing quite a check for myself with this end of month update thing for multiple entries but if I concentrate on one or two systems it should be do-able. 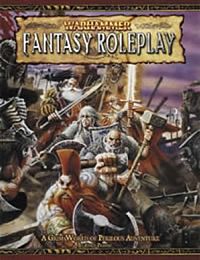 I will say that Warhammer Fantasy FRP is a good system with a great background and a very different feel than the traditional D&D type campaign. The 1st Edition came out in 1986 and was well supported for at least a few years, 2nd came out in 2004 and was very well supported during its 5-year run, then 3rd edition came out at the end of 2009 and is a completely different kind of game of which I have nothing to say as I have no experience with it. If I was recommending it to someone today I would say find the core rulebook for the 2nd edition and see if it's your thing. It's a rare example of what I consider a new edition where they did everything right - improving the mechanics without screwing up the flavor or feel of the game.

Tomorrow: Something completely different.
Posted by Blacksteel at 1:00 PM

Thanks for the post, it was an interesting read. I have never played WHFRP myself, but I love the setting, and have a couple of books (2e)... I need more potential players though. :)

It's a good game. You could run it with as few as 2 players I think, but you would want to go a little easy on them - death can come quickly - or let them play 2 PC's each.