J is for: Jeet Kundo

Inspiration for character creation can come from many different places. I've designed characters based on a concept (Dragon Man!) but I've also designed them based on an illustration and a miniature too. Some have been deliberate parodies. Some have been based on a particular mechanical idea within a system. Sometimes something as basic as a name can get you started.

I played some scattered games of d6 Star Wars over the years but I didn't really get into a sustained campaign until the d20 era. I was designing a long adventure for a campaign - described here - and I had a Jedi NPC that was going to be revealed as a darksider at the climax of the adventure. Now this character was the former padawan of a player character and he would be discovered on a planet appearing to be a normal Jedi refugee, so his name was going to be coming up a lot. I was stumped for one that sounded Star Warsy enough to fit well but didn't sound completely dumb. As I pondered it over a weekend I eventually arrived at Jeet Kundo as the name, which seemed to fit on several levels.

Now some of you have already gotten the joke here (link at the bottom for those of you who don't get it), but none of my players did and somehow the name does seem to fit the universe and a Jedi character, so it stayed. I proceeded to stat him up and this is what I ended up with: 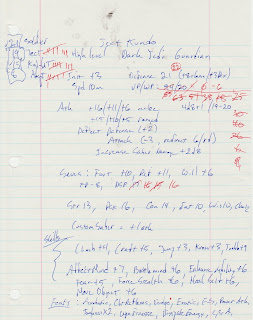 The red is from his final combat against his old master at the climax of the mission. NPC's don't always get sheet protectors...

(Yes, he was an NPC but he was built as a PC so my rule for April still stands, sort of. Besides this was an easy way to work in some Star Wars characters. )

One tendency I have is that once I have a concept for a character I like to keep using it to create variations on the theme within a particular game or genre.  Taking the same system for Star Wars names I soon created Tigh Quando, smuggler captain. This was a human smuggler who was mechanically adept and a fairly decent martial artist and so was not helpless when blasters were unavailable. Visually I saw him as looking something like John Milner from American Graffiti . Here's a very small picture of him along with the car from the movie: 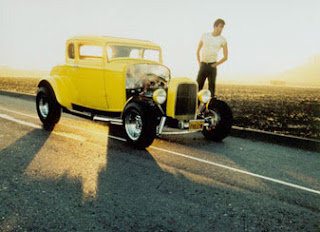 My original idea was that he travelled with a yuzzem companion named Falfa (another American Graffiti nod) who was useful for lifting heavy things and for getting him out of fights when he got carried away. He also had a technical droid named Greaser. There was more background for them and their ship (painted with bright yellow stripes of course) but as you might guess if you've been reading the blog this month, this was a character for (let's all say it together) yet another campaign that never launched. Annoyingly I've only been in one game since then as a player and it was set in the prequel era so I never have gotten to play Tigh in an actual game. I also don't have his sheet anymore so I'll be starting from scratch mechanically.

The last character named in this fashion was another started and played once character named Jooj Itsoo, a Rodian scout aiming to become a bounty hunter down the road (as it's a prestige class in d20 RCR Star Wars). This was about the same time as Tigh's  campaign was supposed to start playing so I wanted something a little different. I liked the idea of a Rodian's mouth making those "ooo" sounds in his name so I tended to overemphasize them when speaking in character. He was flying about the galaxy learning about different environments and creatures in preparation for his future career. He didn't really develop beyond that but I liked the name.

The only other Star Wars character I have played to any degree is Shub Nurath, below. 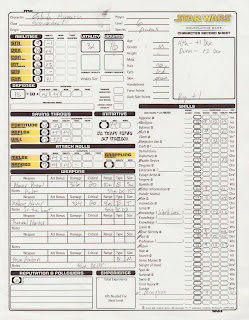 He's a Duros Scoundrel, mainly a pilot and fixer of things. 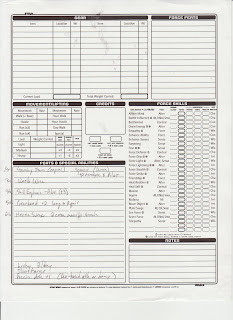 He's a decent shot and an experienced traveller of the galaxy. I played him as the "ready for anything" guy - 3 blasters on his person plus a grenade, plus a pistol and a grenade hidden in the party's astromech droid, plus tool kits in his pockets, plus any little gadget he could find a use for and a place to keep it. The goal was to never run out of options, and he was pretty good at it. I played him as a very happy person, always interested in something wherever he happened to be. This campaign didn't last long either, but it was fun for a time.

I haven't played a character in Saga edition yet. I've run it, but not played it. If I get a chance to play any edition in the near future then Tigh Quando will be resuming his career in short order, with Shub a close second choice. Jeet made a reappearance in my Saga Campaign as a Jedi master for one of my players' padawan Jedi characters. The cycle turns, and the old ideas just keep being reborn for some reason.


Origin of the name "Jeet Kundo" - take a look here. The rest should become clear after that.
Posted by Blacksteel at 4:00 PM

I love your site and as I browsed your blog I decided to award you the Medieval Madness Award.
Go to http://astorybookworld.blogspot.com/p/awards.html and pick up your award.
~Deirdra