One of these days I will finally run a sustained WFRP campaign ... lord knows I have the material and the miniatures for it ... 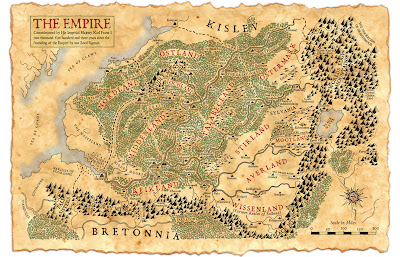 The Warhammer universe is extremely rich, which, oddly enough, makes it difficult to decide what kind of campaign to run. For some games, they are built around a particular type of play: Mechwarrior is mainly aimed at playing giant robot drivers; Shadowrun is focused on largely criminal behavior by off-the-grid free agents;. Sure, you can try something else but the premise of the game and most supporting material drives it in a particular direction. Other games present a universe and a mechanical system for playing in that universe and leave the rest up to you: Traveller is pretty strong at this, and most universal type games are good at this. Even something like a Star Trek game can fall into this category: Fasa Trek started out centered around playing Star Fleet officers out exploring the galaxy. Over time it added support for the major alien races for similar kinds of campaigns, then it added rules for the intelligence services opening things up for espionage type games, then it added rules for playing a merchant type campaign as well. After digging through my WFRP material I would add it to the list of games that says "here's a universe - go!"

The mechanical part of the game does make certain assumptions:

- you're playing a human, elf, dwarf, or halfling. That covers some physical items but culturally there are a lot of options that are independent of physical race.

- technology is at a renaissance level: armor, swords, early firearms, telescopes, and some beginning experiments with steam power

- there are gods in the universe that are benevolent to indifferent

- there is a thing called Chaos that underlies the world, it's bad, and it contains entities that care nothing for the current state of the world or the beings that live in it

There are not a lot of assumptions, though, about what characters will be doing. There is a combat system, but it's pretty d*mn dangerous and it is explicitly stated in the game that a lot of combat leads to maimed and dead characters, so much so that a Fate point mechanic was added to help mitigate the seriousness of those consequences. There are various skills and abilities that relate to personal interaction between characters and to business transactions too. 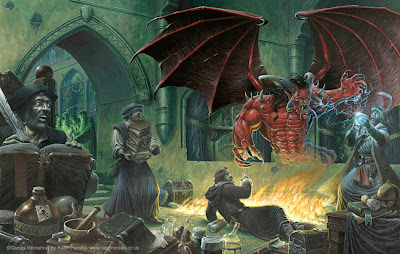 I could certainly see running a traditional D&D style campaign that involves dungeon and wilderness encounters on a personal quest for wealth and power - it would probably feel quite different than most D&D campaigns but it could be done.

Having recently looked through Pendragon and then through my Bretonnia supplement, I think you could run a very solid "Lords and Ladies" campaign similar to what a Pendragon game would encompass set in Bretonnia and involving a little more of the fantastic than a baseline Pendragon game. I'm thinking about writing this up in more detail a bit later but I do like the idea of combining these two things.

You could run a Traveller-style Merchant game running a ship up and down the major river of the Empire.

If you wanted to tie in the Warhammer miniatures game you could have a very fine Mercenary campaign that included some occasional mass battles.

Need political intrigue? The nobles of ther Empire are quite a bickering lot, as are the major religions, and then there are the hidden threats of Chaos cults and the Skaven to make things even more shadowy that stubborn noble houses. 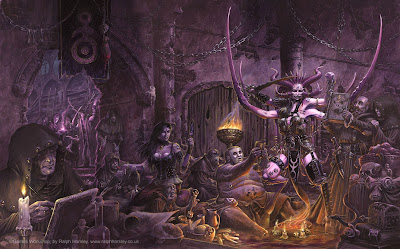 Picking up the Tome of Corruption supplement then you could flip things upside down and go over to Chaos, running a campaign where each player runs an aspiring champion of chaos, perhaps using the recent Storm of Chaos invasion as the background.

There is another supplement that covers the Border Princes but is largely composed of a system for creating, mapping, and then managing a small realm  pacified, claimed, and run by the player characters.

Now you could try a lot of these in various editions of D&D but the difference here is that there is quite a bit of support, both mechanical and with background material and advice for each of them. That was not always true in various editions of D&D - or Runequest or Fantasy Hero or whatever other system you care to compare. The fact that all of these options feel like they could fit coherently within one edition of a game set in one particular fantasy world is a pretty strong positive in my opinion. I like the idea that I could run 3 different campaigns at the same time in this world and not feel like I'm repeating myself at any point. 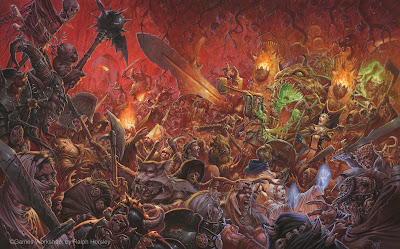 I also think that this could be run as an episodic campaign if the DM had a particular aspect in mind - say one fo the items above - but it could also run just fine as an open-ended-wander-the-world-and-see-what-happens kind of game. I do think I would run it as a more traditional serial campaign in most cases as that just feels more right to me in an age when traveling long distances is supposed to be part of the adventure. You're in Altdorf and need to talk to someone in Marienburg? Getting there might be a whole session in itself whether by land or by sea!

There are several published starting scenarios, more if you drop back and use some of the old 1st edition material. There are quite a few published adventures, both long and short, linked and independent, enough to sustain a decent campaign if that's the way you wanted to go. I do like the idea of using some of those for that shared experience  that lets you swap stories with other players about how YOU handled that trouble in Bogenhafen, but I would definitely want to mix in my own stuff as well. The border princes book is pratically a campaign in itself, as is the mammoth Thousand Thrones advanture and the Altdorf-Nuln-Middenheim trilogy. For a limited campaign I think any of those is a solid choice.

This is a little more general than I originally planned but I have some ideas on some specific campaigns that I will get into in a little more detail and some other ideas too.
Posted by Blacksteel at 12:00 PM