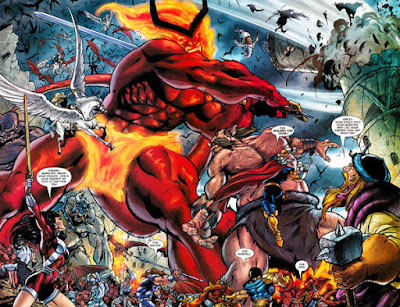 I saw this over the weekend and it was awesome. The Thor movies have been more fantastic than the other Marvel films in that they typically do not deal with car chases, skyscrapers, bank robbers, hacking into some computer system, or corporate intrigue. They are much more about what's right and what's not set against a backdrop of fantastic vistas, monstrous creatures, and tremendous fights. This third Thor movie amps up all of that and outdoes the rest in sheer spectacle.

Bonus: We also get a side view and what is presumably the cinematic universe's take on Planet Hulk. I'd love to see a full Planet Hulk movie but I assume this is about all that we're going to get on that.

There's not a ton to discuss - if you like the Marvel movies you've either already seen it or plan to see it and you should! 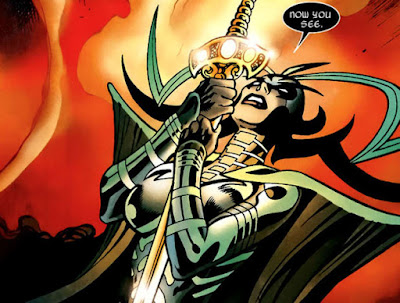 Cate Blanshett does a great job as Hella - an interesting, competent villain who's plans largely succeed despite what the heroes attempt. She's billed as a tremendously formidable opponent and she lives up to that, opening with shattering Thor's hammer and punting him and Loki out of the world. even when they do find their way back she pretty much handles them again! The only way you stop her is to unleash something at least as bad if not worse - Surtur! "A titan to fight a titan" to quote a completely different movie.

This gets to one of the more interesting aspects of the movie - there's no reset button! Thor loses Mjolnir early in the movie and he doesn't get it back! Thor is injured significantly later in the film and it does not magically heal up before the movie is over. The Warriors Three are dispatched early on and they stay dead!  Perhaps most significantly Asgard is threatened, taken over, and in the final battle, destroyed! It truly is Ragnarok! The remaining Asgardians are a group of refugees, looking for a shining planet ... well, you know the rest.

I have to say that on the list of "things I never expected to see in a live action movie" Surtur destroying Asgard would be a significant one. I used to own some Thor comics where he made it into Asgard and seeing that up on the screen was wild.

So yes, I liked it and I am looking forward to the next Marvel thing!

Posted by Blacksteel at 2:11 PM