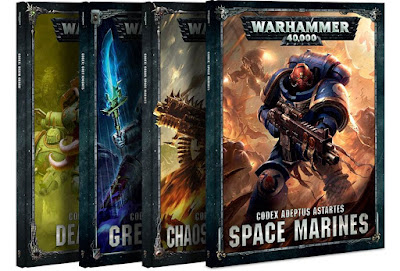 They've added Guard, Mechanicus, Eldar, and Tyranids since this picture was taken, with Dark Angels and Blood Angels on the way by the end of the year and Chaos Daemons coming in January! 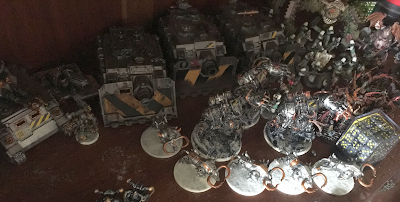 I've fought multiple battles with these guys, mostly losing against Blaster's Space Wolves until I took a heavy tank army - 3 Predators and 3 Vindicators at the core - and blew away his new Thunderwolves. I am happy with how they are developing and there's really not much "new" I need for them - it's mainly a matter of finishing up what I already have.

Acquisitions are largely completed here as well and most of the army is built - they just need paint. It's pretty much the same force as I described here. The second half of the theoretical 2000 points is a trio of 5 man CSM squads with lascannons to both get me an additional battalion for the 3 CP's and to get some lascannons into the army. The HQ is usually a daemon prince and a chaos lord. I have some other options here I am still fitting in to the force - a defiler, a helbrute or two, a second daemon prince, a melee cultist squad, a lascannon predator - it's good to have options but I need to get in some more games to really nail it down.  I've thought about adding one (or three) land raiders as an option too. The good thing is that with 2 battalions + a Spearhead or a Vanguard I end up with 10 CP's.

I figured out recently that I can fit 3 battalion's into this one for just under 2000 points. now it ends up being 3 cultists squads, six plague marine squads, the requisite HQ's and not much else, but it does fit.  It lacks speed - I mean it really lacks speed - so I probably won't keep it as the final form but it was a fun exercise. This is another force that's already acquired, build, and even roughly half painted. The only thing I may add here is Typhus and some Poxwalkers, as I do not own any of either of those.


Between those 3 armies I am at roughly 11,000 points of chaos marines a bunch of which is finished. I don't see it going over about 12,000 because while I do like them I also do have other armies I like to play. 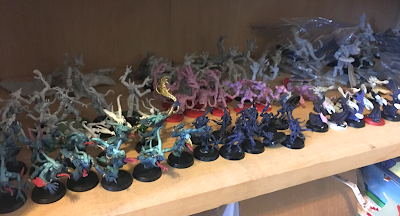 I'm just lumping these in to one bunch. I have quite a few, plenty to use as reinforcements for the Chaos Space Marines if I want to go that route. I'm holding off doing anything more with them until the codex drops. That's partly because of the potential for change, and partly because I need to focus on finishing said CSM's.  I still like them and they are a very different army to play from a marine army - I just need to put things in some kind of order. 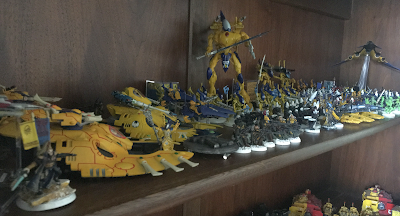 Well the good thing is that after finishing up all of that stuff last year I don't really need to do a whole lot here for the new codex. 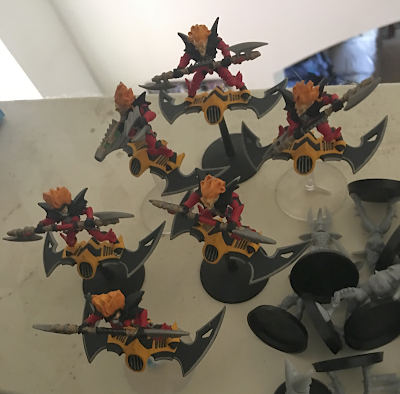 I added quite a bit to these guys but I've only played them twice in 8th. They're not really a coherent force yet as I'm still figuring out how I want to play them but they have been fun.

Next time  - the Imperial side of things!
Posted by Blacksteel at 1:00 PM