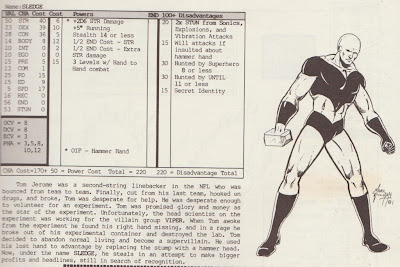 This week: another supervillain from 1982's "Enemies" supplement for Champions. The awesome concept making this villain worthy of a place in a supervillain supplement? He, uh, lost a hand and replaced it with a sledgehammer. Yep, that's it.
Now I kind of like the idea of the hammer-handed-hero (or villain) but everything about this one from the illustration to the mechanics is lame. Technical issues:
So let's see what kind of thought went into attacks and defenses. A 12d6 hammer-slap against himself would  do an average of 12 Body and 42 Stun. His PD of 25 (another unexplained ability) will stop the Body and let through 17 Stun. With a Con of 28 he's not going to Stun himself and with 53 Stun he can take 3 punches before he's in trouble. That's not terrible. In Champions a 50 Str is a typical starting point for a "Brick" character so he's alright there. He's in serious trouble though if he gets attacked by a Sonic or Radiation blaster though - ED of 15 and 2X Stun means that a 12d6 EB would inflict 54 Stun (Average 42 Stun, 27 get through his energy defense which is then doubled) knocking him unconscious in one shot. That's pretty weak for a Brick type character. I've noticed a lot of this in older Champions write-ups - there are way too many 2X Stun vulnerabilities tossed around, especially on characters with low defenses.

So yes, I think this is a rather weak character though not as ridiculous as some (Frizbe). How could we make it better?

For Atomic City I would probably recast him as a  cyborg and replace his whole arm with an obvious chromed replacement and something like a thunderhammer from Warhammer 40K The pro-athlete burnout/accident victim who seeks alternative means of power could work just fine as a superhero or villain. It just needs more than this guy got in 1982.
Posted by Blacksteel at 11:00 AM

I have the uncontrollable desire to redraw these characters in line with your updated ideas.

My drawing ability was "good" in my own opinion in about 9th Grade. Unfortunately it has remained there ever since so I will not be sharing on the blog. My game illustrations would best be described as "sketches" and even my players tend to make fun of them, so they will remain strictly analog. Thank goodness for google image searches.

I've seen the ones on the walls of your internet home though and I would be honored to help kickstart the the inspiration process.

The solution for this guy is to make him an Encounter Critical character...

Even with my limited knowledge of EC (mainly from Jeff's blog) I can see where that might work.