Return to the Ruins of Adventure - Session 14: Parvus Sed Potens 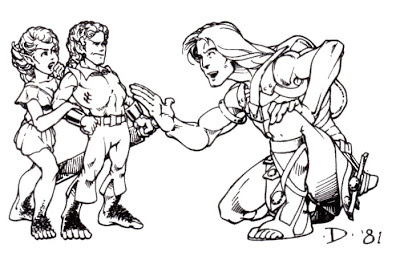 The negotiations with the Fire Knife halflings were brief and unproductive as there was no way that Kordan, sporting his new possessed suit of armor, was going to take guff from something that little. As the Warlock dives for cover (player was absent) the Wizard and the Bard open up on the 14 halflings surrounding them (well - 11 halflings, 2 elves, and 1 human mage*)

The halfling leader charges into combat with some of his band while others stay back and shoot. The barbarian is the main target as he crushes one halfer into paste. The fighter jumps in too and despite the shorties preference for keeping the ambush at range a fair melee scrum develops too. The halfling commander is using poisoned weapons and manages to tag both Uthal and Jovanni, making the fight a little more even. Kordan ends up trusting to his armor more than he expected in its first fight as he is hit by several area blasting spells but comes through OK.

In the end the leader is the only one still standing and decides to run when his last accomplice drops. The Bard, however, manages to pull him back into range and the party snuffs him in one satisfying volley.

As the party heals up, Uthal arranges the bodies into unflattering positions for the various scavengers and allies no doubt lurking in the ruins to find. Then the party heads back to civilized Phlan to recover.

Back in Phlan there is great rejoicing at the return of the lost priest, the Invulnerable Coat of Arn(ol)d, and the wealth of information gathered by the team. Councilman Barnabus starts talking about a possible land grant outside the city if the party will agree to stay long term. A commission is also issued for the destruction of the Fire Knives. The Bard, the Wizard and the Warlock head for the Mage's Guild while the Fighter and Barbarian head for Martial Hall and the training facility next door.

DM Notes: This was a pretty good little scrap. I had planned to have more halflings run away (to show up later) but the fight only lasted 6 rounds. The leader's poison, the elves' mobility, the mage's area attacks, and the halflings' having both melee and ranged capabilities plus their second chance power (reroll once during the encounter) made for a fun fight that was the opposite of the stand-up brawl last time. The Warlock player missed this session so they were down 1 man and that made things a little tighter too. Most of the party was bloodied at some point during the battle which always makes me feel like I'm doing my job right.


Despite only having one encounter, this was not another whole-session combat. Much of the time was spent back in Phlan cashing in, leveling up, picking out gear, talking to NPC's, and looking at what to do next. Most of the party is now level 4 and there are multiple leads for them to pursue. The first 2 areas were fairly linear, then the 3rd was a little more open with options for more exploration, interaction, and stealth in the Plaza. For the next few levels things will be largely up to them until certain looming threats pull them back together for the climax and finale of the campaign - for Heroic Tier anyway.
Posted by Blacksteel at 11:00 AM