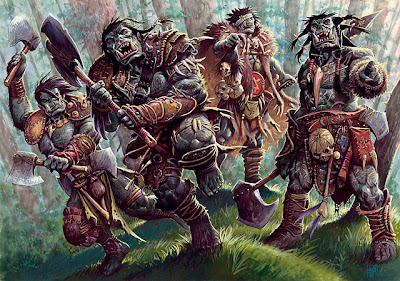 As the trio of heroes catches their breath after defeating the orcs in the banquet hall they hear footsteps approaching from the basement dungeon. As they prepare they see Althea and Kordan emerge from the darkness. "Right where they said we would find you" quips Kordan.

DM Note - the two returning players worked through a quick skill challenge to follow up the rumors, move past the Plaza guards and locate the rest of the party. I ran this pretty quickly as I wanted to get the group together before continuing into another battle and leaving half of my players out of the action.

Our heroes this session:
Uthal and Kordan kick down the door to the next room and see 2 winding staircases leading up to a balcony. Three orcs on the balcony begin throwing axes while a raging orc shouting challenges charges down one staircase on the back of a dire wolf and launches himself at the party - apparently they were expected.

As the party is peppered by axes the big orc does some damage with his greataxe as he and the dire wolf team up.  Despite this the fighting is over fairly quickly as the heroes overwhelm the leader and his wolf then swarm up the stairs and slaughter the rest.

Looking around the group sees that the remainder of the ground floor has collapsed but the balcony has one large door. Opening it they see a library with a roaring fireplace and a big wolf with an even bigger orc waiting for them inside. He challenges Kordan and, encouraged by his armor, Kordan challenges back and the fight is on.

The warlock starts blasting as Kordan charges in and things seem to be going OK until the two bodyguards jump out and hammer Kordan hard. Uthal charges in to mix things up and more blasts and shouts emerge from the Wizard and the Bard. Althea drops a flaming sphere next to the Chief and the Wolf which forces them to move about more than they would like. The close quarters fight with a flaming sphere and a large-sized creature is pretty dangerous and the fighter took a serious beating but Uthal's long-reaching great spear helped a lot as did the judicious use of spells that did not harm allies.

In the end the orc chief stood alone fighting Kordan and Uthal directly while being roasted, magic-missiled, cused, blasted, and taunted mercilessly  until he finally collapsed. Uthal cut off his head for a trophy/bounty while the rest searched the place. On the chief the group found Iron Armbands of Power, a map, and some gold.

Many of the books had been pulled from the shelves and piled or tossed around the room. It was difficult to tell what the orcs were looking for but the party did find several ritual books and hoped that more educated persons back at the temples would be able to help them discern the purpose of this curious move by the orcs.

DM notes: These were two good fun combats that also set up some further adventure options for later.

In the first, the stairs + balcony meant that the party was being attacked at range while being engaged in melee and could not easily jump the shooters. Now the fight only lasted 5 rounds so it was not huge but it was pretty funny to hear the fighter's player taunting the orc shooters for cowardly attacking from safety.

This was not a part of the original delve. I had written up an orcs-in-the-mansion scenario earlier and decided to just use the delve instead but added in this one encounter to make it a little more extensive than the 3 encounters of the original. Plus I liked the visual of the berserker orc charging down the stairs on a dire wolf.

In the second fight I ran it pretty much as-is and with the chieftain being a level 8 Elite Brute he makes for a tough fight. Add in the close quarters, the large wolf alongside, and two starting-out-of-sight berserker assistants and it's looking pretty tough. Then the wizard goes and complicates things with a flaming sphere (which harms everyone in a radius around it) and the fight gets a lot more interesting with repeated shifting and forced movement to try and maneuver out of the fire zone and get someone else into it.This fight only lasted 7 rounds which is long enough to feel serious but short enough to not drag. It was a lot of fun and a good way to wrap up this orcish sidetrip.
Posted by Blacksteel at 11:00 AM