The New Old Campaign - Part 11: The Fungus Among Us 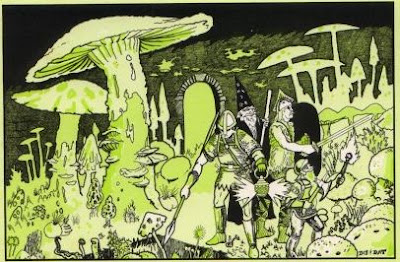 Back at Falcon Keep (the Keep on the Borderlands) our heroes gear up for another expedition. This time they plan to head back to the solitary cave they discovered (The Cave of the Unknown) and explore more of the dungeon within (which is Quasqueton or B1: In Search of the Unknown). Our heroes are:

This time the trip to the cave is uneventful and they quickly scout out the interior. Not wanting any part of the Ochre Jelly in the eastern half of the dungeon, they decided to explore more of the western side. This led to a lot of moving through dusty, empty rooms. They eventually found the fungus garden and while poking around disturbed a crab spider. As it attacked - scaring the bejeezus out of the players when they realized it had a poison bite - the party tramped all over the garden, disturbing another spider and making the battle that much more exciting.

The fight is short but brutal, as both spiders end up dead but Horus and the one remaining hench fighter both end up poisoned. Scrambling around the hall of exotic fungi the rest of the party manages to put together something they think will stop the poison and they feed it to the downed pair. Miraculously it works and after a short rest the group is back on their feet, ready to explore.

Heading for the northwestern section of the halls they hear noises and proceed cautiously, arranging the party in a hall-fight formation. As it turns out, just in time, as they encounter a band of giant rats exploring the hall and moving in the opposite direction. After a short fight the rats lay dead and the party has suffered only a few scratches. They prepare to move on...


DM notes: This was a nice productive session that didn't take a lot of time. The Ochre Jelly in the pool room really put the fear of dying into them so they want no part of that side of the dungeon even now, months of real-time later. I had not put much into the part of the dungeon they went for first and that was probably good as they  had a chance to explore and get their confidence back up.

The Spider fight was fun but it did remind me of some of the differences between old D&D and newer D&D. There were really no terrain rules back then. I gave them some cover modifiers for moving into the fungus forest and setting off clouds of spores but there was nothing in the module and if it was a 4E game I probably would have worked up all kinds of weirdness in advance. For this I mainly went with a +2/-2 for various conditions. I also was reminded of how much I dislike instant-death poison - hated it then, hate it now. In this case if the PC fails his save vs. poison then they die in 1-4 turns. That's pretty harsh at low levels and with no magical healing. Since they were in a fungus garden I gave them a wisdom check to come up with an "antidote" that would give a poisoned character another chance to save upon consuming it. They managed to make a few doses (each un-poisoned character got one check) and the re-saves were successful, so they felt pretty good.

We then wrapped up with the rat fight in the hallway which was a nice straight-up fight - no traps, no engulfing, no poison.

For the "poison" problem I am thinking about possible house rules. One idea I am toying with is adding the condition track from Star Wars Saga Edition to the game. Something like a Crab Spider would inflict a -1 on the condition track with a failed save. Stronger poisons might inflict a -2 or more. It might even work with petrification and the like, so that if you go all 5 steps from one of these attacks you pick up a persistent condition that doesn't go away until the proper spell is cast or potion is drunk - neutralize poison, stone to flesh, etc. It's just a rough idea but it would eliminate the all-or-nothing element and give the players a chance to strategize or even retreat from a bad situation  rather than losing a character to one bad roll. I don;t want to over-complicate Basic D&D (simplicity is kind of the point) but I don't like losing a character in every other session either and this might be an acceptable compromise for us.
Posted by Blacksteel at 11:00 AM

I find that using creatures with effects like that is actually quite effective to ensure that the players are taking their encounters seriously and not just rushing in because it's "easier".

I would never think of throwing in a death-poison or petrification monster every other session, but I might have one rarer entry on my wandering monster table for a location have that kind of a power, and potentially one or two keyed entries in a dungeon.

A good way to approach monsters of this type is to provide at least hints nearby to give a sense of what the party might face if it continues onward--spiderwebs hanging from the ceiling or covering walls, oddly-positioned statuary, etc. Reward players for being observant and asking questions, rather than penalizing them for bad die rolls.

I think monsters have to have some impact besides just raw damage so I'm all for it, I'm just less tolerant of it as a DM now trying to run a long-term campaign than I used to be as a player. One bad roll can kill off a PC that has otherwise behaved sensibly for the whole run.

I do like to use some foreshadowing but I didn't do much of it this time. Even if you do though, their only real choice is to go around the room or engage anyway, and at low levels they just don't have a lot they can do as far as potions or magical aid. Higher levels mitigate a lot of that danger but below about 5th it's pretty unforgiving.

I knew all of this going in but it's still part of the game and sometimes bad things just happen. It did get me started on thinking about another way to handle things though and I'll post more on that later.