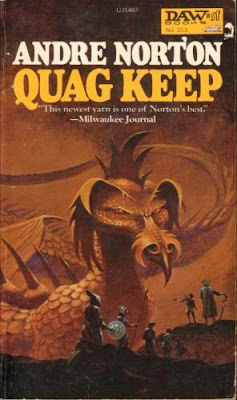 Since I noted I was reading it on the sidebar I figured I ought to put something up about it now that I am finished.

It's an interesting read. I had forgotten a lot of it since I read it many years ago so I really could not remember the resolution of the story. To summarize it's a fairly average quest story. A party gathers at an inn in the city of Greyhawk, discovers details about their quest, then heads out. They encounter danger and weirdness, get some further information along the way, then eventually reach their goal (I'm being fairly vague here but spoilers will be plentiful below). The initial difference here is that the main characters are from the real world and have been sucked into a proto-Greyhawk. This is a device that turns up quite a bit in early game-related fiction but it makes it's first appearance here. Also it is technically a Greyhawk novel but well...not really. more on that below.

-Is it a good fantasy novel? No. It's just not really all that fantastic, the characters are shallow, the world is very lightly described, and the quest takes about a week from what I can tell. Plus it has something of a science fiction feel to it - not a bad thing, and not unusual in a lot of older fantasy fiction, but it doesn't read like Tolkien or even Moorcock.

- Is it a good D&D novel? No. It feels somewhat old school as in the characters are really not superhuman but the plot of the quest is not something that would happen in a D&D game and the conceit of the merged players and characters is also not something that would come up in a game. Additionally there is no magic-user in the party but there is an elf ranger, a bard, a cleric, a female fighter who knows some kind of magic, a lizardman, male fighter who knows zero magic, and a wereboar with a pseudo-dragon pet. Not exactly a typical adventuring party.

-But it's a Greyhawk novel right? Sort of. It's set in Greyhawk but it's at best a proto-Greyhawk where the city and the Sea of Dust are the only anchors to the GH we know today and almost all of the country and regional names are different and the gods are unrecognizable. They run into some strange shadow creatures, some undead (confusingly referred to a Liches though they are clearly not the MM style Lich) and some human opponents. They do speak briefly to a Gold Dragon, so there's something familiar at least.

-Sooooo...what's the point? Well if you're a longtime Greyhawk fan or want to read the first gaming novel ever, it's worth a read. If not, skip it - there's nothing precious here. I admit I was a little disappointed in the lack of Greyhawk here. I'm not sure if it's due to Andre Norton ignoring details from EGG, EGG not sharing much, or EGG not having a lot of the countryside nailed down (as we know much of the classic flanaess map was developed for publication, not in his home campaign) or what exactly influenced how this ended up but it's minimal at best.

All that said this is the first D&D novel and a thumbs up to TSR for getting a real science fiction author to write it. It's not among her best work but at least they tried to get an experienced professional and not a game designer who just wanted to be a writer like so many later novels would feature.

At the time this was published (1978) fantasy was entering a new period of popularity and I'm sure that drove some of the effort to get this published. If you count the rediscovery of Conan and LOTR in the late 1960's and Frtz Leiber's Fafhrd and the Gray Mouser stories and Moorcock's Elric stories in the early 70's as a "first wave" of the modern era then you have a second wave of popular fantasy starting in the late 70's with books like the Sword of Shannara, Piers Anthony's Xanth stuff and then Thieves' World as a sort of "second wave". From what I can tell this novel did not do terribly well and there wasn't another D&D novel published until 1984 - Dragons of Autumn Twilight which you may have heard about sometime in the last 26 years. Fortunately that means we don't have to blame Andre Norton for the tide of crappy D&D books that washed over us in later years and that's good as I like a lot of her work.

So anyway, Quag Keep - at this point it's really more of a historical curiosity for old-school gamers and fantasy fiction fans than an actual good read. I'll be keeping my copy, mainly for that reason.

I remember my brother Jim buying this book when he was in high school. I still have that copy.

While Quag Keep is certainly wanting in terms of plot and characterization, I still read it every now and then for the sheer atmosphere. There's a darkness that permeates the book, a definite sense of the strange that I like, for example the descriptions of the City of Greyhawk and the tower of Hypaspes(?).

This book also contributed to my abiding love of lizard men (though lizard men should be of the desert, not of the swamp...but that's another matter entirely).

I do have to say that we ran many campaigns with ourselves as the PCs trapped in a fantasy world when I was in elementary school, too...and many parties were run thru our dungeons with nary a magic-user in sight (too weak at low level, according to some in our group...they'd always bring an elf along).

So, yeah, not a great novel or even a D&D novel, but it has its charms.

Oh I agree that it has a special place just for what it is, beyond some if the specifics of the story.

Storywise it does have an almost dreamlike quality to it.

The only game I can remember that specifically mentioned playing yourself as the character was Villains and Vigilantes but I'm sure people did it some in other games too, like you mentioned. My groups never did. Personality-wise they ended up that way a lot of the time, but not stat-wise.

We typically had at least 2 mages in our parties - they were the flaming oil/wolfsbane/holy water/mirror carriers in our games because they usually had some money left over from not buying weapons and armor. It made them at least a little more useful than the one spell.

One thing that I do like about QK is the fact that it has some ties (however tenuous) to Gary's Greyhawk campaign. Places like Greyhawk, Blackmoor, and so on are mentioned. There are a couple of passages detailed enough that one has to wonder if Norton was writing with a map nearbly.

She had played with Gary sometime before and there was some back and forth communication when she was writing the book (letters I believe) so maybe he sent her a rough map to use with the book.