The Forgotten Realms and Me 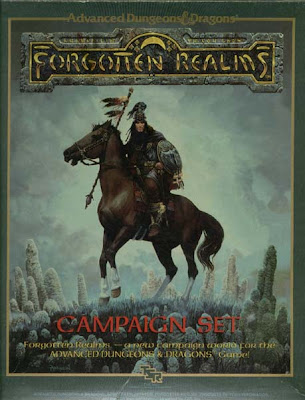 After all of my talk about Greyhawk I though I should spend a little time with Brand X...

I remember reading Ed Greenwood's articles in Dragon in the early 80's and liking almost all of them. he had a very easy way of making it seem like all of this stuff was coming from a real place  - the seven swords article, Pages from the Mages, the ecology articles. There was one he wrote about building a campaign world that stuck with me for years because it was so good. So when the word came down that TSR was putting out a new campaign world and this guy was the driving force behind it I thought it would be pretty good. It was.

I have a friend that I've known since I was 13. We don't see each other much anymore but he got the FR boxed set when it first came out and when we DM'ed for each other (and others) we pretty much settled that he ran the Realms and I ran Greyhawk, and we kept that arrangement for more than 20 years. So I played 1st edition Realms but it really took off for us with 2nd edition.

The 2nd edition Realms boxed set was just pure gold - gods, monsters, lots of maps, some NPC's to place. At the end of the 80's and the early 90's, the Realms was the hot world to be in - everything from the gold box computer games to the Bloodstone adventures (Battlesystem!) were set in the Realms, and I had a blast. My friend was very much an old school DM with no fudging, wandering monsters, and a fairly strict adherence to the rules, so I can't tell you how many characters I buried there but it's in the double digits somewhere. I know that just counting clerics I was up to Brutallus Maximus III, priest of Tempus, before we wound down and moved to 3rd.

The thing I liked best about it conceptually was the maps - lots and lots of maps. Poster-sized maps. Faerun. Waterdeep. Undermountain. All of these came with lots of big huge maps just dripping with interesting places. The Hill of Lost Souls. The Halls of the Hammer. Dragonspear Castle. The Battle of the Bones. The Moonsea. All of these places make me want to gather a party and go exploring.

The thing I liked best mechanically was Faiths and Avatars. Finally, clerics could belong to a specific god and play differently than each other mechanically. Once this came out I read my friend's copy, bought my own a week later and never looked back. I played specialty priests (usually of Tempus, the war god) from then on and that's how I finished out 2E Realms.

The thing I liked the least about the realms was the novels - many of them were just bad, some terrible. They did little to enhance the world and a lot to cheapen it. Many of the concepts in the game - The Harpers, Evermeet, Dracoliches - were cool, but then the novels just destroyed whatever uniqueness or mystery there was to them. I'm pretty tolerant of game fiction, but these were the novels that showed me it could suck.

There's a lot of old-schooler hate for some aspects of the realms, but most of them never bothered me - Elminster, etc. but I was coming from Greyhawk where we had a bunch of named high-level NPC''s too so that didn't really seem all that different to me. Modenkainen, Bigby, Otto, Robilar and Tenser didn't come from Faerun. Seven Sisters? We had the Circle of Eight. Too many gods? Look at the list in the 3E Greyhawk Gazeteer and tell me that's a short list . It's compiled from all of the 1E and 2E published material, it's not just made up for 3rd.  Now I didn't care for Kara-Tur or Maztica (more bad novels - though the final Horde novel, "Crusade" was pretty cool )  but they've largely ignored those areas since 2nd edition anyway, and in 4th Maztica got replaced by a big chunk of Toril full of Dragons and Dragonborn, which is much cooler anyway.

So once 3rd edition came along I kept running Greyhawk and playing in the Realms and it was good. My final character was a 3.5 human barbarian who took the shield-bashing feats and had a good time smashing things up. We saw the terror of Rappan Athuk and fought some giants in a conversion of G1. I discovered the fun of high level druids who could wild shape into a Dire Bear and have a Dire Bear as a companion, letting our party take 2 giant melee beasts into the oversized hallways of the Steading, where much butt was kicked. It was a good run and 3E fit the Realms just fine. The DM was great. He didn't care about the stupid novels or the metaplot, he just ran his adventures in the world and we liked it.

Along came 4E and I would say that a majority of the people who liked the Realms through 1-2-3E hated the changes for 4E. Gods died, nations and cities changed, NPC's died off or disappeared, continents were moved or reappeared or retconned...and I was fine with it. I wasn't sure what I was going to do with 4th, but when I finally got a look at the Realms campaign guide, well, the parts that changed I kind of like. It is a more modern cinematic style of high fantasy (floating chunks of rock in the sky, etc) and it does explain the mechanical differences with magic and the new races quite well. Plus the Realms has always been a kind of anything goes type of world so you can fit darn near anything in it and 4E finally gives us a system that supports the ridiculously high power levels seen in some of the older material, including being the chosen representative of a god on earth. One problem with older version of D&D vs. the novels written about D&D (yes Gord the Rogue included) is that the book characters would do crazy powerful things that could never happen in the game so they tended to be the Chosen of Mystra or the son of a deity or some other very special background. Now all that stuff can happen in the game  - between 20th and 30th level. If Greyhawk is a Heroic tier to Paragon tier kind of world, then the Realms is a Paragon to Epic kind of world and there's nothing wrong with that.

I haven't played any 4E in Faerun. My friend isn't running 4E as he hated the changes and there are other issues there too.

I have however run 4E in the Realms. When I finally started looking at running a 4E game (after much resistance on my part) I didn't want to run a published module, I wanted to write my own stuff. I looked through my material and realized somewhere along the way that one of my favorite touchpoints with FR was the old computer game Pool of Radiance. It was a cool idea that was handled in a rather lackluster fashion for 1E as "Ruins of Adventure". The setup though was perfect for 4E's new "everything is leveled" approach. Once I grabbed onto this idea I pretty much had to set it in the Realms - like the Temple of Elemental Evil belongs in Greyhawk, Phlan belongs on the Moonsea in the Realms. It's not really a conversion - it just uses the same general layout of the city and has some of the high points I remember from the computer game and some of the same background. The encounters are my own creation. Many 4E books and sheets of graph paper later we're playing through it and the group is having a good time, including the DM.

So much fun that when the time comes to start the apprentices on 4E I may place them in the Realms instead of Greyhawk as it opens up the possibility of their party meeting up with the Friday night party and teaming up for an adventure or two. Multiple parties sharing the same campaign world and crossing paths with them either as allies or rivals - now that is truly old school.  Greyhawk will be seeing some attention with the 1E campaign anyway, so I may delay its 4E time until later - I don't think it's feelings will be hurt. Down the road I can turn the Realms campaign over to another DM -maybe one of the apprentices - and actually get to play 4E - and the Realms - again.