Dark Sun and Me 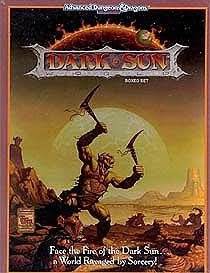 Dark Sun launched as a boxed campaign in 1991 (a revised set was released in 1995) for AD&D 2E. I owned this set and liked it a lot. The world was very different, magic was tweaked, races were different, and even classes were modified somewhat, but it had a lot of possibility for traditional fD&D activities - looting, pillaging, fighting, and carving out your own place in the world. It was "Points of Light" (4E's catchphrase description) before PoL was conceived with a few scattered city-states (that were not bastions of good by any means) separated by a whole planet full of hostile deadly wilderness where even the halflings were nasty cannibals.

One of the reasons it clicked with me was that it felt like it was written for grownups, unlike Spelljammer's "Saturday Morning Cartoon" version of D&D or the PG rated Forgotten Realms this felt like it was the "rated R" version of D&D - more raw, more violent, less nice and not coddling new players. It touched buttons in me that covered everything from Road Warrior to Spartacus to some of the Conan stories to countless westerns.

Specifically, making psionics a major element distinguished it in a lot of ways both flavor-wise and mechanics-wise. Adding half-dwarves in any other setting would have been laughable but in this one they were bad-ass bald guys that were tougher than just about any other race. Half-giants (another questionable race that worked out OK) were even tougher. This world was so tough that you started at 3rd level and rolled up you backup characters as a standard part of character generation! I really liked it. I talked my players into trying it out, we made up characters, and I ran something like 4 sessions before it petered out -

To some degree it was too different with things like bone weapons, weird monsters no one knew anything about added on top of the magic and racial changes. Additionally, 2E psionics was a wildly unbalanced system more akin to Gamma World mutations than any coherent levelled sub-system and that didn't help. A lot of our vision of D&D was tied up in a Human Paladin, an Elf Wizard, a Dwarf Fighter, and a Halfling Thief gearing up in town then riding out to some ruin and that was tough to recreate in Dark Sun.

Timing was also an issue -1992 was a year with a lot of changes for people too - some of us were working our first jobs out of college, some of us were having babies, and our once-stable schedule for the groups I played in was a thing of the past. I brought it up a few more times over those next few years but I could never get more than one other person interested in it at a time.

One of the issues I've sort of retroactively discovered is that as we get older and we have less time to devote to games and other hobbies is that the interest in trying out Option Y decreases significantly, but not because we're older necessarily. It's more because if I have 4 hours on Friday night every week to play something and I know I like Option X, then when someone brings up Option Y I have to consider whether or not I will like it better than Option X. It's not that I think Y sucks or is an inferior thing. It's not that I would have to go buy a book for Option Y. It's not even that I think I won't have fun with Option Y - it might turn out to be a great way to spend that time. It's that I have Option X, I know I will have fun playing it, and that playing Option Y means I won't get to play Option X. this is known as "Opportunity Cost" in economics and it applies quite well to this problem. There's a cyclical element to it too - when I was in junior high to high school to college I had plenty of time for games but not a whole lot of money to spend on them. For the last 15 years or so money hasn't been a huge issue, but finding time to play has become harder.

Recruiting the kids now that they are old enough to play has broken this logjam to some degree as they are more available than my adult friends who have jobs and families of their own and they are enthusiastic about everything really - they don't have enough background to declare that  Option Y sucks or that Option Z had rules  issues that were never fixed or anything else (and I count myself among the guilty here) - they just think these games are cool and want to play more of them.

With Dark Sun coming out now for 4E there's a pretty good chance I will pick up those books down the road and run at least a limited campaign at some point. This is sort of a drilling-down of the problem stated above - now beyond having more games than I have time to play, I have more campaign ideas for each game than I have time to run. For example, I have 3 or 4 good ideas for 4E D&D campaigns and I have only been able to sustain 1 and that one has been spotty lately. Rather than retro-gaming back to 2E I expect the 4E version will retain the same flavor and provide better mechanics which make it the version to run whether it's with my grognards or with my Apprentices and that's probably the next time I'll bring up Dark Sun, though it may be 2011 before it kicks off.