The Known World and Me 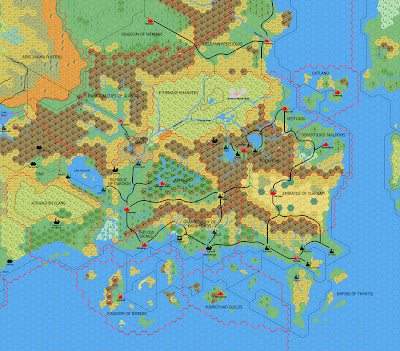 I know it's called Mystara but it was introduced in the 1981 Expert Set as "The Known World" and that's how I like to remember it. When I first saw it I thought it was awesome. I had seen Greyhawk and loved it and the Darlene map but this was a started-but-not-yet-finished map that spurred some creativity in different ways than GH. it was generic D&D but we didn't care back then because there weren't a dozen D&D worlds out there already. Much like the GH folio each nation had about a paragraph of information, then there was a more detailed map and description of Karameikos. Plus the Isle of Dread - don't underestimate the Isle of Dread's impact in making this world cooler because not only did you have this nifty map but you also had an adventure in the box that required you to do some traveling to get to it and a rulebook in the box that gave you rules for how to do it! It was a complete package and one that I am sure a lot of people used.

Later sets expanded on this world and the gazeteer line gave it a realms-like treatment in regional detail and maps. I have some of these and they are very nice. The Companion Set gave us rules for ruling territory and fighting mass battles and I thought those were cool too.

All that said and despite the long history of this world, I never really played or ran it very much.  I know we used it some back in our BECMI D&D days  but we didn't go into much detail with it as back in those days we made up some of our own worlds or just used the Greyhawk folio.  As we got a little bit older some of the names were a little too simple or obvious and the whole world seemed a little too kiddie for us teenagers.

There was a big overdone box set for it in the 2E era but I never had one or played/ran with it. as we had moved on to other worlds by then. The whole Immortals thing was a little weird to me then but I actually like it now and can see how it could be used for a pretty decent D&D 4E setting if WOTC decided to make it one or if a fan group really dug in and worked it up well.

So my history with this one is...limited. I'd happily play in a campaign run by someone who was passionate about the setting, but otherwise it's not something that's really on my radar. I just thought it deserved mention since it was one of the early campaign worlds and had a lot of influence on how people built their own worlds, including myself.