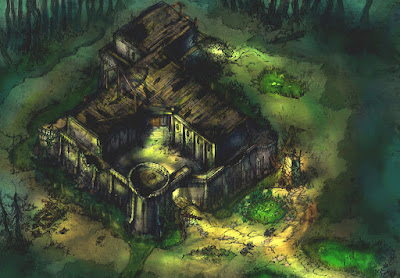 ... my kids were mangling the Moathouse garrison on a spring break run.

I could probably do a lot of posts like this at this point. I suppose that's a good thing as I'm still at it but I'm also feeling the passage of time a bit these days as the last of them wrap up school and prepare to head out on their own - mixed emotions for sure.

The same week we also had one of our early Marvel Heroic runs with Breakout from the main book. An awesome game cut down prematurely but we have good memories and I still break it out (Yeah I went there) from time to time. Plus now we have the latest general Cortex book in print and we're also waiting to see what the newest Marvel RPG turns out to be. Amazon is showing "April 19th" for the playtest release - hopefully it will be interesting at least.