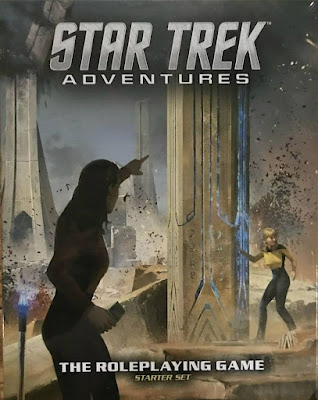 I got this a while back and I felt like I really should post about it. While I have some quibbles with the rules themselves this is a really good starter set. It contains the expected basics for something like this: intro rules, intro adventure, pregen characters, a ship sheet, some map sheets, tokens, and dice. 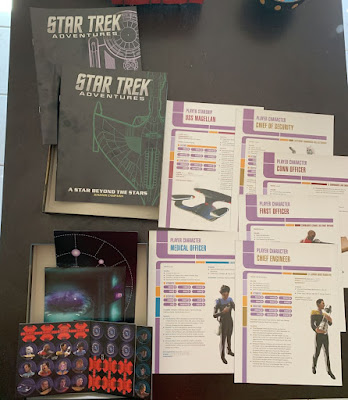 The most recent starter box type products I have used are the Starter Kits for the various Star Wars games from FFG/whoever is doing it now. Those have similar contents - clearly an influence here and I have had good experiences running the Rebel set and the Jedi set for my players. I thought this would be an easy way to start my crew with the new STA game if the opportunity arises and I was pleasantly surprised as I read through this one.

First up the rules booklet is more thorough than I would have expected. It gives a solid presentation of the main rules, covers combat in a separate section, and the starship rules are in a separate section as well. You could certainly run the game with what is presented here. The only major mechanical element missing is character advancement - not really unexpected in a starter set.

The pregens are fine and representative of what you would find in a typical federation bridge crew. The ship is a Galaxy class so it should be familiar and fans will have a feel for what it can do under normal circumstances.

The adventure is surprisingly good. There are three parts here and the first starts off fairly mundane - scan stuff. Beam over and check systems on another ship. Some basic combat. But that's alright here as this is very much a "learning the system" situation. It made me think about some of the old D&D Basic Sets in that way, although it is assumed a GM is running the game - it is not programmed self-instruction. This section is still decent as it introduces a mystery involving an old antagonist - one that is not over-used.

The second section involves further exploration of the mystery and brings in some familiar races. This time it expands to planetary exploration and action.

The third section has a ton of potential as it brings in some major lore nuggets, space combat, and puts the PC's into position to make some major choices that could have a significant impact on the setting - much more so than a typical starter adventure.  This is not low-level characters in a starter dungeon type material - it's big time Trek and actually made we want to run this to see what my crew would do. 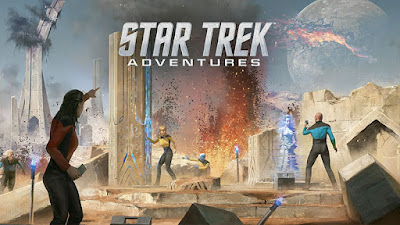 So yes, if you are considering checking out the game this is an excellent starting point and even if you already have the big core book a) the adventure is good and b) the small rulebook would be a handy player reference at the table. You could easily run this with a newly generated crew instead of the pregens and with experienced players that's probably the best option as we all know no one likes pre-gens. At 20-25$ most places it's a great way to start your campaign.